Worth its salt I cannot put into words how very much I enjoyed “Requiem for a Schooner” in the July 2012 issue, and the photographs of such dear, wonderful people. Mr. Vitelli’s article alone makes the issue worth its salt. It’s a fine piece of writing. In all fairness then I should tell you that I cooked for Sandro’s parents 20 or more years ago, and I thought the world of them. I have fond memories of them, and of some of his relatives who are mentioned in his story. But I would have enjoyed the article had I not known them. It’s a fine piece of writing.
Jane F. Butler
Desert Yacht Yard
Mount Desert Island, Maine
Healed by a Whaler 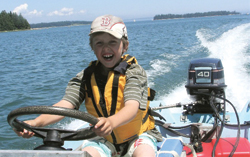 Re: “A Ticket to Ride: Why every 12-year-old needs a Boston Whaler,” by Bill Mayher in the July 2012 issue. Forty-one years ago we bought a used 13' Whaler. We used it at our camp on Deer Isle, and it was our only boat and lots of fun for years. Thirty-one years ago, our six-year-old son had complicated heart surgery and, despite good care, for weeks he was hospitalized and did not get better. The medical staff agreed to let us try a Deer Isle hiatus, where the Whaler was waiting. He stood behind the wheel, we traveled familiar passages hour after hour, and he began to smile again. The boy and that boat put a full recovery together. Now our 12-year-old grandson wants to know if the Whaler is in the water. I will pretend the boat is there for him, but from time to time I slip down to the float for a little Whaler spin. Three generations later, it’s still a thrill.
George Zentz
Deer Isle, Maine
Testing the prototypes 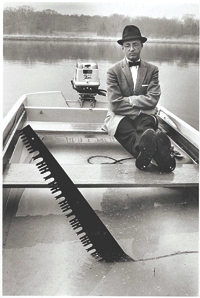 courtesy Boston Whaler
I well remember the trials and tribulations of the birth of the Whaler, because I watched the testing of the prototypes. For a period of time, each week a new Whaler would arrive at Back River, Pocasset, Cape Cod. It would sit and slowly settle in the water as the new foam technique of the week failed and absorbed water. This resulted in a number of half-sunk prototype Whalers being used as floats for the dock at Barlows Boat Yard. If memory serves, the sawing of the Whaler (see above) was done nearby (but don’t hold me to that). By the time my own children were old enough, we had moved to Florida, but their first boat was a Whaler and a 5-hp motor. The cry was not for a Whaler, but for “more horsepower,” which ultimately they got, and used to terrorize Stuart, Florida.
Jay Potsdam
Stuart, Florida
Tooling around in a Whaler When I was 18 in 1972 for my first summer away from home I discovered the wonderful world of Boston Whalers on the ocean. Friends who had been summer kids on Mount Desert Island all seemed to have a 13' Whaler parked either in their yards, stored in a garage, or actually in the water, so a whole new world opened up for me that lasted until my early 30s. Work came first, but in between shifts, hours of summer antics included tooling around Frenchmans Bay, Northeast Harbor, Somes Sound, and the Western Way in someone’s Whaler, the original two-stroke engines leaving traces of oil on the surface of the water and smoking up the dock each time we started them. But man, did we have fun with all our irresponsible behavior. There were moonlit cruises to Egg Rock with no running lights, trips in the fog to Isleford with no charts, and of course, the circumference cruise of MDI, which took us ten hours as the tides, fog, and getting seasick after drinking too much Liebfraumilch caught up with us. My brother even did a solo trip in a Whaler from Bar Harbor to Petit Manan with his Newfie and some peanut butter sandwiches. Also, we beached often on the Porcupine islands (which I was happy to see pictured on your July cover).
Leslie Harlow
Ellsworth, Maine

The son of the man who developed the Whaler speaks I spent many memorable hours in a 13-foot Boston Whaler when I was a kid in Cohasset, Massachusetts. We had many adventures striper fishing, exploring, swimming off Minots Light, watching sharks many feet longer than our boat, running down to Duxbury or up to the islands off Boston. Being set loose in a boat at age eight or so is the best education a kid could get. There are immediate consequences for your mistakes and immense satisfaction as you achieve the common-sense skills universal to boats as well as many other life situations. I will add that before being turned loose in a Whaler, we had a few years under our belts: swimming, rowing, and sailing as rookies. That’s probably a good way to start before careening away with 25-hp motor behind you.
Dick Fisher
Bells
Prospect Harbor, Maine
A question Whalers are wonderful, but don’t youngsters hone their boat-handling and seamanship skills in rowing and sailing dinghies any more? I hope so. My husband, Bob Drake, paddled his first boat off Annisquam, Massachusetts. He soon convinced his father to build and install a pointed bow, which made the boat work a lot better. Bob has enjoyed many wooden and fiberglass sail and power boats, especially sailing and living aboard his 43-foot wooden ketch Kismet in the Bahamas and Caribbean for seven years. My sons, Gary (aged 111⁄2) and Hudson (aged 10) Maynard, sailed our homebuilt dinghy off Princess Margaret Beach, Bequia, West Indies, as their dog Leao acted as a heavy figurehead. Later Gary worked on the tall ships Shenandoah, Pilot and Californian; Hudson crewed occasionally also. Gary worked his way up to become a windjammer captain, and as a shipwright restored traditional wooden vessels on Martha’s Vineyard for years.
Mary (Maynard) Drake
Trevett, Maine
One generation to the next During my youth I spent my summers in Christmas Cove and South Bristol, and I grew up with Boston Whalers. After I married and we bought a cottage in the village of Bayside, in Northport, I had to buy a boat, as well. I talked with a good friend who sold boats, told him we now had two young sons and I needed something safe. I also explained that I would be teaching my sons how to use a boat, especially since my husband would have to work and not be with us all the time. Of course, he suggested a Boston Whaler and I, of course, wholeheartedly agreed. Our sons have learned so many things from their adventures on Penobscot bay. From one generation to the next, the Whaler can’t be beat.
Angela D. Cassidy
Northport, Maine
Remembering Henry There I was, poring over the July 2012 issue (#121), when I saw the article “Nellie and the Hand Grenade” by Eva Murray, and then I saw “Matinicus” and the word “teacher.” I said to myself, I know a teacher from Matinicus…! Then I saw Henry Blagden’s name and almost fell over! Henry was a customer of mine in Anacortes for many years, and we took care of Patience, the sailboat he built on Matinicus island. Henry was a genuine character, warm and funny, always a joy when he would pop into the shop after the haying was done on his ranch in Eastern Oregon (Wolf Creek, to be exact). He came ashore with the first Marine combat troops in Vietnam, came back a little messed up, and was possessed of a college degree in literature I think. The teacher position on a small island was the start of him putting himself back together. He met Sue there, and got married. She healed him, along with the shaping of that pretty wooden Tahiti ketch. Henry died last year, and one of his daughters has taken over Patience.
Paul Schweiss
Service Manager, San Juan Yachts
Anacortes, Washington
Buttering (popover) cups We would love to try the popover recipe provided in “Feeding the Rusticators” by Sandy Oliver in Saltwater Foodways, July 2012 issue, but information on how many popover cups to butter is missing. Can you tell us the yield on the given amount of mixture? Gut instinct tells us six, but we’ll be more confident if you can say for sure.
Barbara & Bernard Bomba
Port Jervis, New York
Soon to retire to Bath, Maine
I would say six if you use a pan made for popovers but up to nine if you’ll be using smaller cups. If you have batter left over, quickly butter up a couple of more cups; don’t worry—the batter won’t fall apart while you do it. —Sandy Oliver 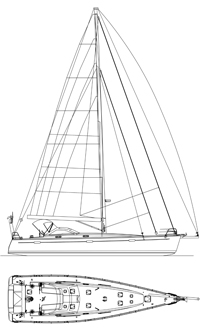 Kiwi Spirit (July 2012, Issue #120)
Choosing a boatbuilder Maine Boats, Homes & Harbors is a most interesting and informative magazine to read. Of special note to me, was your article on Kiwi Spirit (July 2012, Issue #120). I was pleased and not at all surprised to read that Stanley Paris (a New Zealander) wisely chose a Maine boatyard to build his yacht for his circumnavigation. I’m sure that he will be more than satisfied with the design, production, workmanship, performance, and over-all value. Isn’t it a shame that Senator John Kerry chose to have his boat built in New Zealand, when any number of boatyards in Maine, Massachusetts, Rhode Island, or Connecticut could have been utilized?
Al Grimshaw (formerly from MA)
Foster, Rhode Island
774-991-2919
PS: Your magazine is the only one I read cover to cover. Please continue as is; I wish you much success!

A Letter from the Publisher - Issue 113