"There's something just right about the way the Friendship sloop Gladiator's seven tons work in every weather."
Last July at the Friendship Sloop Society’s annual races in Rockland Harbor, Friday brought something fantastic. I had heard rumors about a schooner day, but I hadn’t paid much attention. I was focused on getting aboard our Friendship sloop Gladiator with enough sustenance and libation to last through the day's race. Surely the race would go more or less as usual. Similar to the last 40 years, during which my family had raced at the annual FSS regatta, there would be some problem or other -- a drift start, a rogue fog bank, or wind from a direction that would push the fleet perilously close to Rockland’s significant granite breakwater. Sometimes there would be a combination of problems that would conspire to undo a single course around the marks. But Friday, as it turned out, was different. 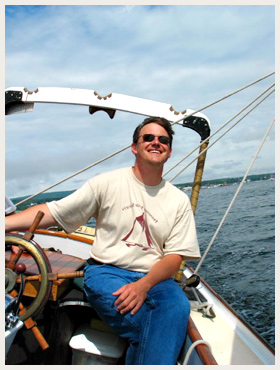 After an uneventful, even downright boring start, there was a good breeze and clear visibility—a gorgeous summer day in Maine. There were sloops behind us, several in fact. Even after “Handicap Alley,” we rounded the Owls Head mark in a single digit place out of the 30 sloops in the fleet. Then it happened. From all directions massive hulls, masts, and bowsprits appeared. A fleet of great old schooners spread gaff, boom, and sail, absorbing the immense space around the breakwater. The local windjammer fleet was on parade—it was Schooner Days in Rockland. This attracted smaller boats to the scene, craft of all shapes and sizes, with hordes of spectators bearing the large black eyes of cameras and binoculars. The breakwater was crowded with onlookers, and, as the afternoon wore on, a smoky southwest haze hallowed the harbor filled with schooners and Friendship sloops, making the spectacle a living tintype. A glowing echo of the great age of sail had brought the waters and all who viewed them to distraction. Several times we had to alert the boats around us that we were actually racing, and to give us buoy room. 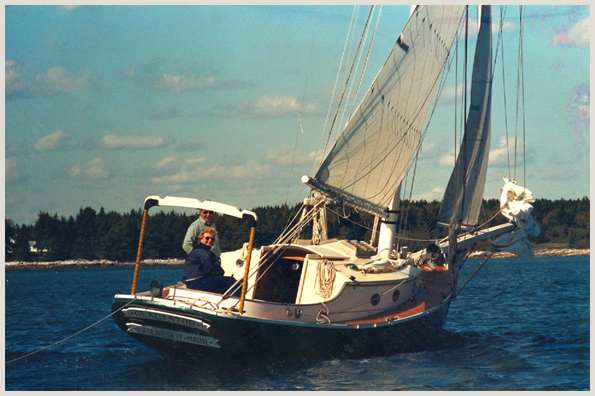 The author's parents, Bill and Caroline Zuber, aboard the family's Friendship sloop Gladiator.
Seeing so many antiques made me think of my father. I remembered when Gladiator sat beside our barn in 1982, gradually growing wider, ribs turning more brittle as the damp heat or dry freeze of the plastic house that covered her took their toll. Built in 1902, the sloop was in desperate need of a third reincarnation. The last serious renovation was in 1944, after Gladiator had gone from deep-water fisher to a neglected daysailer renamed Downeaster. Dad replaced the stem when he first got the boat in 1966, and restored the original name. But after two winters passed since dry-docking in 1982, Dad realized he either had to do it, or let Gladiator go. So, amazingly, he did it. He broke out the bilge cement to get access to the rotted knees and frames. Soon, flat-headed bolts, cables, and turnbuckles crisscrossed the cleared cabin, coaxing the boat back into shape. The broken oak frames were reinforced and the salt-cured planks were refastened with four-inch square-cut iron nails, which required both a three-pound hammer and a good part of a year. Then he cold-molded the hull with three layers of quarter-inch pine, applied on opposing diagonals, permanently obscuring his handiwork. After that my mother washed, dried, and ironed acres of cotton muslin, and my father soaked it in epoxy and applied it over the cold-mold, making our century-old boat look like one just off the lot, glassed and glossy. Only my father really knew the truth. 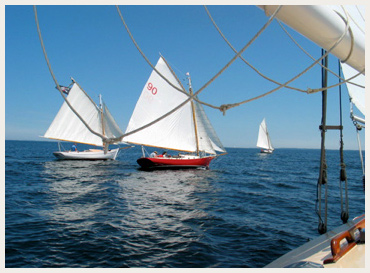 Some Friendship Sloop Regatta races have plenty of wind. Others.....
Now, on race day, as I looked across the assembled fleet, I thought about all these older wooden vessels. I thought of the incalculable labor that it took to keep these grand sailboats afloat. If the median age of the fleet were figured, and if they were people, they would be eligible for Medicare. I looked at Andy, my brother, and his friend Noel. They were my crew and surveyed the same, almost surreal scene. “Numb,” I said. They looked at me. “It’s just plain numb,” I said. “Look at it out there, for all to see. All the numbness involved, keeping these boats alive for centuries, against all odds, fighting all that rot. What do they call this event?” “I think it’s just a promotion for the schooners,” Andy said. “Well," I said, "I think they should call it The Numbness Festival. Yessah, that about says it.” Or does it? Let's say I was being a bit ironic. But the truth was actually embedded in the wood, canvas, and history. The old schooners eloquently parted their native waters on a scale massive enough to keep. Similarly, our sloop boats were just too damn comfortable to let slip into obscurity. There was something just right, for example, about the way Gladiator’s seven tons worked, in every sea and in every weather. The boat was particularly spry when there was little to no wind at all. So, call it numbness or passion, keeping these old boats together certainly occupied a lot of people over a long period of time. Likewise, 50 years ago, a few people got the bright idea to have a homecoming regatta in Friendship, Maine, for the sloop boats they loved. To bolster the absurdity, more owners of Friendship sloops joined in, sometimes from across the globe. The group grew, became the Friendship Sloop Society, and kept track of the owners through their boats in order to lure them back to Friendship’s warm summer waters each year. The event must have been right, for it brought together such a disparate collection of families and personalities. It was so right that it even survived the move of the homecoming regatta from Friendship to Rockland (the latter being a harbor with public facilities, and actual restaurants, hence, much more suitable for the crews of the visiting sloops and their admirers).

The 50th Annual Homecoming and Regatta of the Friendship Sloop Society will be held in Rockland, Maine, July 22-24, 2010. FMI: www.fss.org Bob Zuber is a freelance writer currently living in Maryland. His book, Christmas Convergence, about his childhood with his family and only sister (the Friendship sloop Gladiator), is available at amazon.com.