The World Champ is Otter! 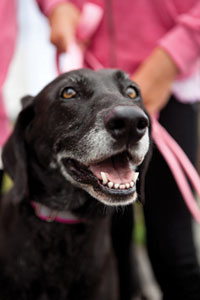 A world-champion-style smile, if ever there was one. ©Jeff Scher
When the fur, hula hoops, margarita mixes, lobster bribes, and sombreros were done flying, there was a clear winner at MBH&H’s 2012 World Championship Boatyard Dog Trials. It was a fine specimen of the black Lab-ish kind named Otter and her young handlers Phoebe and Jane. Of the competing teams of dogs, Otter was the only one to willingly go in the water. In fact, the challenge was to convince her to stop swimming long enough to perform her dockside tricks. Otter will keep the cherished “Pup Cup” trophy for one year, and can come back and defend her title in 2013. Otter is a poet, and plans to use her win to further her pawblishing endeavors. The Boatyard Dog “People’s Choice” award—in which show-goers voted for their favorite competing dog with their dollars—went to Duff by a wet nose. Proceeds were donated to the Humane Society of Knox County and the PAWS Animal Adoption Center in Camden. Share your Boatyard Dog’s story with our readers! Send a clear photo and pertinent details to BYD, P.O. Box 566, Rockland, ME 04841 or use the form at www.maineboats.com. The trials are held on Sunday morning during the annual Maine Boats, Homes & Harbors Show. Lead sponsor for 2012 was Custom Float Services, media sponsor was The Bark magazine, and supporting sponsors were Sea Bags, The Loyal Biscuit Co., and Planet Dog. Next year’s Maine Boats, Homes & Harbors Show will be August 9-11, 2013. We suggest that you start training now!

Share your Boatyard Dog’s story with our readers! Send a clear photo and pertinent details to: BYD, P.O. Box 566, Rockland, ME 04841, or click here and use our online contact form.

A Letter from the Publisher - Issue 113