It's no accident that 75 years after the launch of the first Concordias, all but one of the 103 yawls built are still afloat

By Elizabeth Meyer She sails like an angel's wing and she takes my breath away." That's how one Concordia owner explained the cult-like devotion these boats inspire. 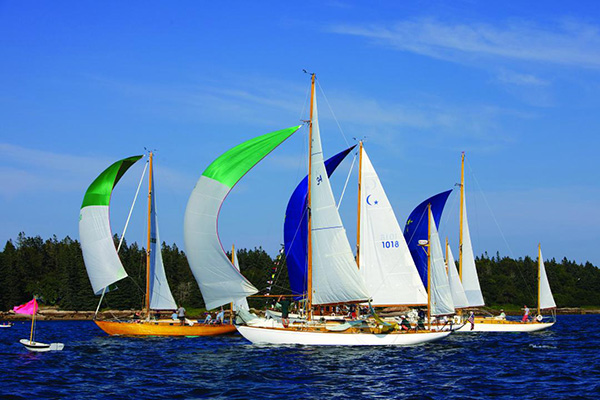 Concordia yawls race to the finish in the Eggemoggin Reach Regatta. The company's boats are known for the star and moon emblems on the hull and sail. Waldo Howland said he first wanted to use an eye, but the star looked better. The addition of the crescent was inspired by his "mental picture of an autumn new moon hanging daintily beneath the bright evening star." Alison Langley
"My Concordia has shown me the verities of existence," wrote another in one of the many class anniversary yearbooks. "How to pass through the waters of life gracefully, with steadfast purpose and as little fuss as possible; How to be warm and beautiful and welcoming, yet retain an underlying steeliness of character; How to weather life's troubles with strength and gallantry; How to appear simple, neat and plain while closer scrutiny reveals layer upon layer of perfection." This summer the iconic Concordia yawls turned 75. That's a notable span of life for a wooden boat, especially when many of these yachts live such adventuresome lives-crossing oceans, competing in offshore races, and cruising thousands of miles. Of the 103 sisterships built, 102 are still around. This is an unmatched survival rate for any class of yacht ever built, anywhere in the world. The first Concordia, Java, was designed and built as a one-off in 1938 for Llewellyn Howland, a craggy and exacting New England philosopher with clear ideas about what he wanted. His son, Waldo, had recently formed a partnership with one of America's great yacht designers, Charles Raymond Hunt. Their company bore the name of a Howland family whaling ship, Concordia. 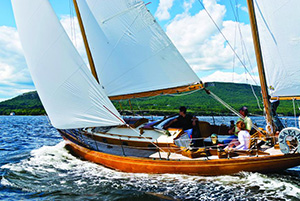 Arapaho, a 41-foot Concordia built in 1961, sails in Penobscot Bay, near Camden. The split rig-mizzen, main, and jib-makes it as easy to handle as a daysailer. Benjamin Mendlowitz
Together, these three men produced one of the most beautiful, long-lived, and beloved of any class of yachts. Llewellyn had a clear vision of what he needed in a boat; Waldo was a visionary in his choice of wood, interior layout, and esthetic detailing; and Ray Hunt worked his magic designing the underwater shape, rig design, and balance-the resulting hull was, quite simply, beautiful. "My father wanted a boat to sail well in every sort of weather one might encounter on the New England coast," said Waldo. "He wanted a beautiful boat, a harmonious boat with esthetics determined by Yankee tradition. He wanted a family boat that would serve multiple generations of sailors from the stately grandfather down to the baby carried aboard in a wicker basket. Ray Hunt designed a boat that was ideal for the purpose." Although Hunt designed Java as a one-off cruising boat, with no attention paid to any rating rule, the yawls have more than held their own in yacht races. The list of first-place finishes is revealing: the Bermuda Race in 1954, 1968, and 1978; Cowes Week in 1955; the Halifax Race in 1955, 1963, 1967, 1979, and 1981; the Annapolis Race in 1955 and 1957; the New York Yacht Club Navy Challenge Cup, Una Cup, Cygnet Cup, Venona Cup, and Astor Cup in 1953, 1956-57, 1959, 1962, 1966, and 1978; the Whaler's Race in 1966-67 and 1970; and the Off Soundings Race in 1985 and 1986. And that's only in the first 50 years of the class. 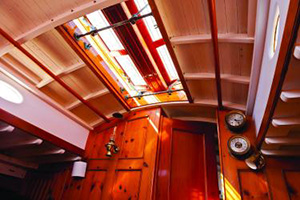 Starlight, a 39-foot 1954 yawl, has the distinctive Concordia main cabin skylight and bulkhead. Benjamin Mendlowitz
The first four Concordias were built in the United States-two before World War II and two after the war in 1946-47. Then in 1950, yachtsman Drayton Cochran did a pivotally important thing for the class: he ordered a yawl from Abeking and Rasmussen Shipyard in Lemwerder, Germany. At that time, the great A & R shipyard had been reduced to building wheelbarrows and interior paneling for buildings. They were thrilled to have an order for a yacht and put their best men onto building Nos. 5, 6, and 7, which were ordered by Cochran on spec at a cost of $7,500 each. Keeping one for himself, Cochran asked the Concordia Company to sell the other two, which they did for a nice profit. Cochran not only found a yard to build the boats, but he also persuaded great racing sailors such as Daniel Strohmeier to buy the yawls. When Concordias began piling up the racing trophies, orders rolled in. Four were sold between 1952 and 1953, six more in 1954, and another dozen in 1955. Construction went on at the rate of about 10 per year until the numbers began to dwindle in the early 1960s. The last yawl was built in 1966.
He wanted a beautiful boat, a harmonious boat with esthetics determined by Yankee tradition.
But numbers, amazing as they are, cannot explain or define the magic of these little yachts. Concordias are thriving today because of the fanatical loyalty and adoration they inspire in their owners. Elizabeth Meyer edited and published the Fortieth and Fiftieth Concordia Anniversary Yearbooks, founded the International Yacht Restoration School, and is president of J Class Management. She owned a Concordia yawl for 18 years.