A boat kit for sailors of all abilities and ages 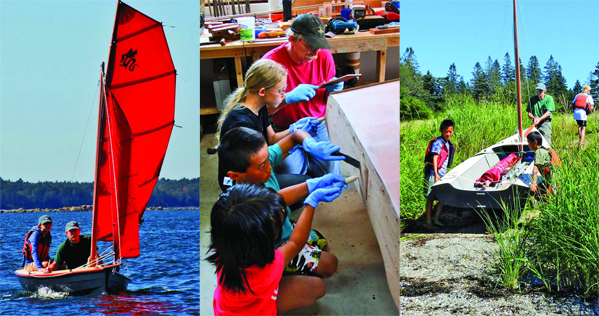 John Brooks, Leigh, Jack, and Hangxiang fill screwholes in the transom (left). At not much over 100 lbs. with the rig aboard, the boat is simple to move on a small bicycle-wheeled boat cart or with two adults, or their equivalent in kids (middle). The boat starts to plane in a 10-knot wind with the smaller rig (right). Photographs courtesy Brooks Boats Designs (3)
By Gretchen Piston Ogden John Brooks and Ruth Hill’s modus operandi since day one has been to design and build boats as a family. They began in 1992 as a boat-designing and -building couple; now, as their four children have grown older, the team has become a full-fledged six-pack. This is perhaps one reason why their new boat kit, the DragonFlyer 3.2, was designed for all ages. The kids are old enough to help out (they range in age from 8 to 12), and help out they did on the prototype. This boat is good for young sailors, but it also works well for adults. Re-rigging the boat for different sailors or conditions is reasonably quick and easy, with two different mast and bowsprit positions, and three different rig options (sliding gunter main, main and jib, main and asymmetrical). This allows one setup for beginners and another for more experienced sailors. The high-energy racers in the family won’t be disappointed, either. They can pop the asymmetrical or choose the larger main and jib option and put the “flyer” half of the design’s name to use.
Then there’s the logo: what kid wouldn’t want a dragon in the family?
With jaunty red sails, glued lapstrake hull, and a plumb stem, the DragonFlyer immediately appeals, looks-wise, to all ages. Then there’s the logo: what kid wouldn’t want a dragon in the family? Adults, who have to consider practicalities, will appreciate that the boat is light, simple, and easy to carry with car, truck, trailer, boat cart, or people power. This also means the boat will get used a lot, unlike a heavier, more unwieldy vessel, or one that’s more difficult to rig. The DragonFlyer weighs about 100 pounds without the rig, and all the spars fit inside the boat. The first prototype boat was named Zip, for obvious reasons—this boat moves. The whole family helped debut Zip at the Maine Boats, Homes & Harbors Show in Rockland in August. It generated a lot of interest, but Hill said Zip will stay on in the Brooks Boats family. How could it not? The whole gang helped to build it. 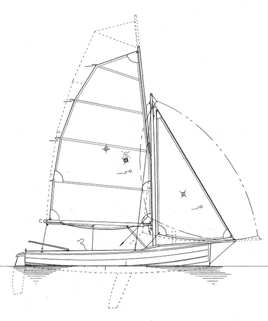 One boat with two sizes of sail rigs, two mast steps, two bowsprit positions, and an asymmetrical.
The DragonFlyer building process was crafted to be ideal for those who are new to boatbuilding—this boat went together in just three weeks from when the first parts were assembled to when Zip was loaded on the company truck for the trip to Rockland. Three weeks won’t be enough time for builders who are learning as they go, but if you are looking for a fun family project, starting your DragonFlyer soon should give plenty of building time for a summer 2014 launch. Or, Brooks and Hill would be happy to build one for you, with the options (and dragons) you choose. 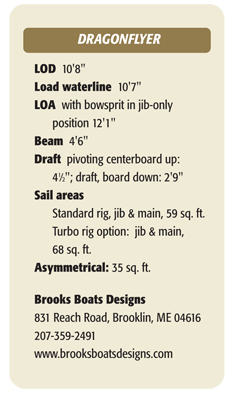 The kit comes with a detailed guide with many photos, said Hill. “We are writing it so that you do learn how to do things, learn new skills, as you build, it’s not just a step-by-step manual.” Brooks Boats will be building a batch of DragonFlyers with families at the WoodenBoat School this coming summer during Family Week, Aug. 3-9. Hill and Brooks, and their team, also planned to build a new DragonFlyer this winter and spring. Editor at Large Gretchen Piston Ogden is currently living aboard with her husband and cat. Slide show: Building and sailing the DragonFlyer 3.2 kitboat was a family affair at Brooks Boats Designs. Photos by Brooks Boats Designs