By Peter Bass
Every now and then I catch myself envying friends who have retired and been able to adapt a seasonal home on the coast to year-round use. Should I have been able to do that, I’d like to think that some of the summer magic would carry over into the cold months, and I could keep some sort of a boat in the water for the odd pleasant winter day. Come spring, I would get a head start on the rusticators and be ready long before the high season arrived. Then I remember that for 30 years I lived within an easy drive of Boothbay and often visited during the winter to check for break-ins and various varmint antics. I also remember that once the ocean reaches its winter equilibrium there is little call to be on the water until early June. So I will leave the cottage on the point to its proper use: a few short months of family gatherings and the special sunny warmth that means more because it is so infrequent. Instead I have repaired to my winter porch where I can keep tabs on my native state without picking up a snow shovel. Winds on the water According to widely reported news, the Norwegian energy company Statoil has canceled its wind energy project off Boothbay. Statoil was the only bidder in 2010 when the Maine Public Utilities Commission went looking for an offshore wind project to support with ratepayer subsidies. The state Legislature, at Governor Paul LePage’s request, reopened the process last summer. This resulted in a second proposal from a for-profit team, led by the University of Maine. Left with questions about Maine’s interest in its project, which LePage opposed because of the above-market rate in its power purchase agreement, Statoil left the state. The U of M group, which is called Maine Aqua Ventus (get those old Latin textbooks out), has not negotiated a power purchase contract yet, so whether it will result in a better deal or not is yet to be seen. All we know is that we have traded one solo player for another. We don’t know the rumors behind the news, which means we cannot enjoy one of our favorite porch pastimes: uninformed speculation. Perhaps the change in public policy simply provided a convenient cover for Statoil’s exit for other economic reasons? That’s our unfounded opinion, what’s yours? Over the bar Watching the last America’s Cup and noting the immense public interest in foiling catamarans that can hit speeds as high as 50 miles per hour made me think of how far we have come as a sport since the monohulls of the past, and the uphill battle for acceptance waged by multihull sailors and designers. Dick Newick, the designer and sailor behind much of the revolution, died at age 87 in late August. 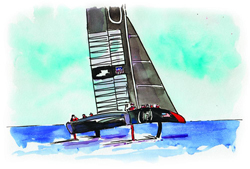 A little time spent on the Internet revealed a full life of adventure and innovation. I recommend trying to find the New York Times obituary of Sept. 15, 2013, which puts his many contributions into the context they deserve. I was left with two nuggets to carry around: first, that he embraced reincarnation and believed he was an ancient Polynesian boatbuilder in a previous life; second, his quote about boat speed: “People sail for fun, and no one has convinced me it’s more fun to go slow than to go fast.” Doublespeak exposed One often-used trick of political speech is to describe a lessening of the rate of increase in spending as a decrease. Politicians seem to think that if we are not climbing the stairs as fast as we were last year that we have started going down. This peculiar logic has jumped into the global warming debate in the form of an interpretation of a slower rate of global warming in the 2000-2010 decade as a reason to discount global warming. It’s sort of like telling a state trooper that you weren’t speeding because the last ticket you got was for 50 mph over the speed limit and this time it was only 40.
Long hair was not in style at the Naval Academy… A word from an officer enabled hospitality to trump hairstyle.
Philip Conkling’s column in a November Working Waterfront  (“What is that seahorse doing in my trap?”) noted how quickly some elements of the media reported that a decrease in the rate at which temperatures were rising was evidence that we didn’t need to worry about it anymore. He then went on to describe many measurements and anecdotal evidence in Gulf of Maine water temperatures that belie such a conclusion. Not only is the water warming, but it is also rising. On the porch we started singing the 1970s tune by Shango: “Where can we go, when there’s no San Francisco? Better get ready to tie up the boat in Idaho.” Slow and frivolous

Long-time MBH&H Contributing Editor Peter Bass hopes that his review of the Lazy Bunz product won’t prevent the manufacturer from sending along a set of four with Lazy Bar for field testing, and tickets to sunny South Florida to achieve a fair test. To submit your comments... newsy tidbits, photos, illustrations, clippings, rants, and raves for possible use in this column, use the form below. Or mail to “View From the Porch,” P.O. Box 566, Rockland, ME 04841 or fax to 207-593-0026. Items may be edited for length and clarity; materials become the property of Maine Boats, Homes & Harbors, Inc.