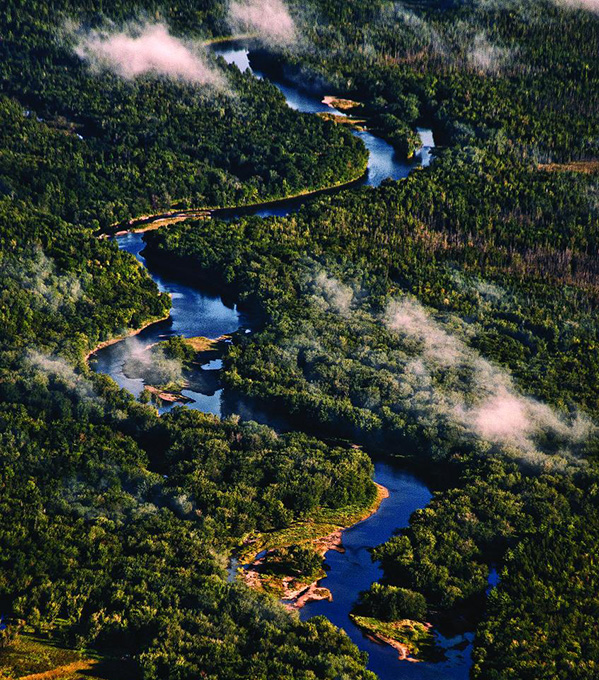 The East Branch of the Penobscot River taken by Scot Miller on August 24, 2010. "I was able to add a visual perspective that Thoreau could only have dreamed of-aerial photographs. They were made possible by a collaboration with LightHawk, a nonprofit, volunteer pilot organization," Miller wrote. Photo by Scot Miller, Courtesy of Harvard Museum of Natural History
Henry David Thoreau famously retired to a small, simple cabin on the shores of Walden Pond "to live deep and suck out all the marrow of life … to know it by experience." But after about a year of thinking and observing in his cabin in Concord, Massachusetts, he sought an even more intense connection to nature. In July of 1846, traveling by railroad, steamboat, buggy, bateau, and foot, Thoreau headed north to Katahdin, or, as he called it, Ktaadn. This year, 2014, marks the sesquicentennial of the publication of The Maine Woods, the volume of Thoreau's journals from that and two subsequent Maine journeys. 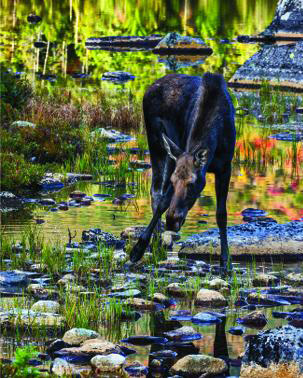 "I was surprised to notice, that, as soon as the moose had passed behind the veil of the woods, there was no sound of footsteps to be heard from the soft, damp moss which carpets that forest," Thoreau wrote in his journal. Photo from 2012. Photo by Scot Miller, Courtesy of Harvard Museum of Natural History
If Thoreau's sojourn at Walden Pond exposed him to solitude and to himself, the Maine voyages brought him into direct contact with "primeval, untamed, and forever untamable Nature," that "Earth of which we have heard, made out of Chaos and Old Night." Thoreau's austere cabin appears quite luxurious when compared with the conditions of his northern adventures, where he slept under a blanket-tarp, or in a tent, or-when the tent burned, as it did his very first night in the woods on his first journey-under his bateau. To commemorate the anniversary, I spent some time rereading The Maine Woods. I was both captivated by Thoreau's observations and passionate concerns, and amazed by how little has changed over the many decades since the philosopher-naturalist tromped around our northern swamps, sinking at times to his knees in the mud. I then visited "Thoreau's Maine Woods," a celebratory exhibit mounted by Harvard University, Thoreau's alma mater, at the Harvard Museum of Natural History. The show features contemporary photographs by Scot Miller, who spent 120 days in the Maine woods over seven years, retracing Thoreau's steps in all seasons. It coincides with the publication of Miller's Thoreau, The Maine Woods: A Photographic Journey through an American Wilderness (Levenger Press, 2013). While Thoreau's words convey a quizzical eye toward humanity-at turns praising, critiquing, and laughing at the foresters and hunters he comes across-his take on nature is purely reverential. Miller's photographs retain that wonder; they are breathtaking portraits, many of them reflections of lakes and streams captured in the rosy light of dawn or dusk. Stand in front of Miller's photo of Haskell Pitch, East Branch, or his West Branch image of the Penobscot, and you see such lyrically running waters that you can almost hear their delightful babble. But consider poling or warping up those rapids and you might begin to shiver, no matter the season. Thoreau's experience of the Maine woods was a confrontation with himself, with humans' place on the planet, with the meaning of civilization. Miller's image of a storm approaching on Chamberlain Lake would take on a different meaning if you were in a delicate birchbark canoe in the midst of that lake. The photos show us where Thoreau traveled, but not the frequent rains, the bedraggled travelers, the moose skinned with a pocketknife, or Thoreau's many questions. 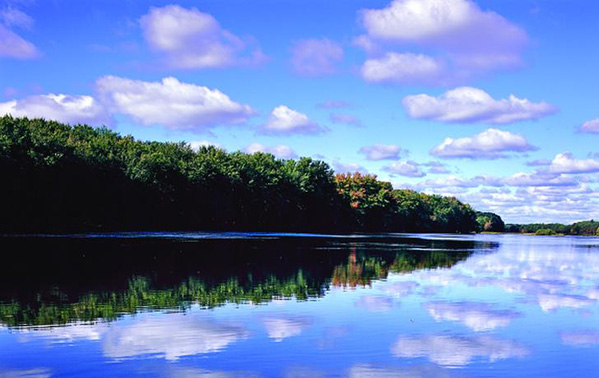 "Two years turned into a seven-year journey of discovery, photographing, and learning about the land, the people, and the rich history of Maine's North Woods," wrote Scot Miller. This shot of the Penobscot River was taken September 30, 2008. Photo by Scot Miller, Courtesy of Harvard Museum of Natural History
These questions-like the woods that engendered them-are surprisingly similar to the ones we wrestle with today. I had just finished reading Thoreau's fervent cry for protection of the pine tree-"the pine is no more lumber than man is, and to be made into boards and houses is no more its true and highest use than the truest use of a man is to be cut down and made into manure"-when a photographer friend called to describe a clear-cut he had seen near Calais, the trees snapped in two as if twisted off by a giant. In my friend's voice I could hear Thoreau mourning the degradation of the pine, that is, writes Thoreau, "as immortal as I am, and perchance will go to as high a heaven, there to tower above me still." 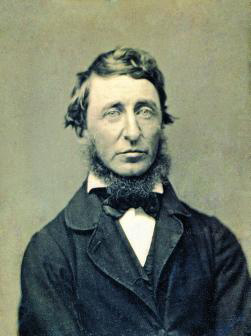 Henry David Thoreau
Thoreau understood the delicate balance of nature. He spoke about the taking of trees, "as if individual speculators were to be allowed to export the clouds out of the sky, or the stars out of the firmament one by one." Today we might similarly speak of the taking of the oil beneath our feet. For truly it is no hyperbole to state, as Thoreau does: "We shall be reduced to gnaw the very crust of the earth for nutriment." Harvard's exhibit celebrates Thoreau's awe of nature, and Miller's awe of Thoreau and the woods that Miller spent years photographing. From the perspective of Boston's metropolis, it seems almost impossible that there would be such a wilderness just five hours north. It is perhaps a miracle that the north woods have been preserved-and not turned into farmland or grassland as Thoreau feared; or into developments and a highway-not yet, at least. And though today we may approach the woods by car to paddle its rivers in nearly unbreakable fiberglass canoes, or hike its mountains by trails well-worn and marked by others, Maine's woods still have the power to humble us, to remind us of our place on this planet-and also to inspire us. To understand the magnificence of what Thoreau saw, view these photos; to share Thoreau's internal journey, read his words. But to let such a journey take its hold upon you, travel north and submit to the thrall of the wilderness. Donna Gold writes from a century-old shingle home overlooking Penobscot Bay, only a few hours drive from some favorite north woods haunts. She is the editor of COA, College of the Atlantic's magazine. "Thoreau's Maine Woods: A Journey in Photographs with Scot Miller" is on view through February 2015 at the Harvard Museum of Natural History, 26 Oxford St., Cambridge, MA. www.hmnh.harvard.edu. View a slideshow of Scot Miller's western Maine photos