A performance power cruiser that’s made in the USA 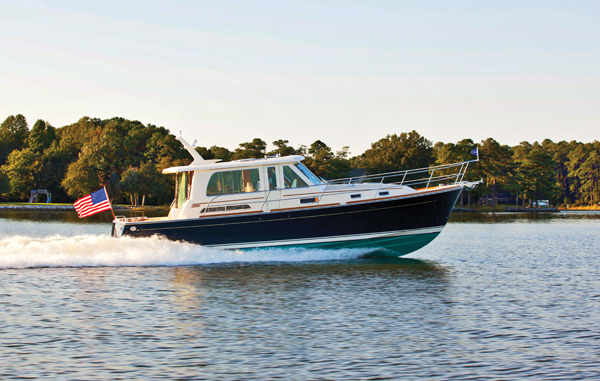 Photo courtesy Sabre Yachts. The Sabre 42 Salon Express combines classic downeast styling with cutting-edge technology.
By John Snyder Looking for an American-built, high-performance day-boat/coastal power cruiser? The Sabre Salon Express 42 is all that, and then some. For more than 30 years, the Casco, Maine-based boatbuilder has been responding to the needs and desires of sophisticated, knowledgeable boaters by combining cutting-edge marine technology with classic downeast styling. The resulting Sabre Salon Express 42 offers high performance in an elegant coastal-cruising package that is perfect for a couple and will easily accommodate the occasional overnight guest or two. While the hull design is not new (Sabre has recently completed hull no. 100 of this model), the 42 has evolved in terms of power systems (including a 9kw Onan genset) and amenities, and is now offered with a flybridge, while maintaining the original interior, deck, and cockpit layout. The flybridge option comes at a $50,000 premium. According to company Vice President of Sales & Marketing Bentley Collins, “We have only built four of the flybridge design to date, but recently we have had plenty of interest.” 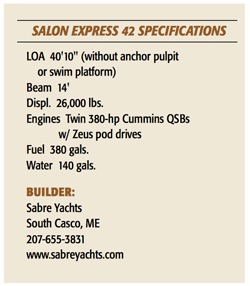 The 42 rides on a modern planing V-hull constructed with VIP resin-infused laminate and SAN Corecell foam coring with knitted bi-axial structural reinforcements. The hull is fast, sea-kindly, and ruggedly built. The actual length of the yacht is 40'10" without the bow pulpit or swim platform. Like the hull, the deck is infused resin with the addition of anti-skid surfaces, which have been molded in. The Salon Express has large stainless-steel perimeter rails; Herreshoff-style bow, stern, and spring cleats; and a stainless-steel anchor roller. The cockpit is spacious and L-shaped; hinged seating allows easy access to the drive pods. It has seating for six, an oval cockpit table, and a two-person aft-facing bench settee against the cabin bulkhead. An additional single seat is located to starboard of the bi-fold stainless-steel bulkhead entry door.So why does a lobsterman need a boat with an extra, say, two feet of length, or ten inches of beam, you might ask? It’s a matter of how big their traps are, for one thing. An extra few inches (or feet) of cockpit could mean another row of stacked wire traps, rather than wasted space that can’t be used efficiently. Moving into the salon/helm deck there is an L-settee to port with an inlaid folding salon table. A two-person settee is to starboard with storage underneath. There are drop-down windows to port and starboard and an LED television on an electric lift. The helm features two seats, Ultraleather wrap on the helm/navigation pod, and a wooden steering wheel. Forward of the salon and a few steps down and to port is the galley, which has ample storage in lockers and below the galley sole. For ventilation there is a stainless steel port light over the galley. A couple of steps down from the mid-level galley there is a guest cabin to starboard that may be enclosed with a pocket door. The master stateroom is forward and has a queen-size island berth with storage underneath. There is private access to the shared head from the master cabin, as well as plenty of shelves, drawers, and cedar-lined hanging lockers for storage. 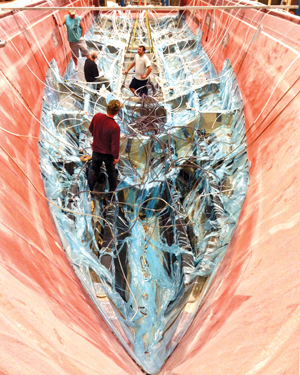 Coming soon: the Sabre 66 Dirigo Workmen at Sabre’s Rockland, Maine, facility, install tubing to infuse carbon fiber hull reinforcements in Sabre’s new 66-footer. The largest and most luxurious Sabre yet, the Dirigo is expected to debut in the summer of 2015.
The 42’s good performance comes from its twin 380-hp Cummins engines, which are mated to Zeus pod drives. The power system delivers 35 percent greater fuel efficiency than conventional inboard systems, according to company specs. The yacht’s recommended cruise speed is 2,700 rpm, which delivered 27 knots during sea trials in a light chop and light wind. At that speed, fuel consumption was about 32.4 gallons per hour. The 42 is also a very quiet ride thanks to extensive engine room soundproofing. Engine controls at the helm station include Cummins Zeus controls and Smartcraft display, and a joy-stick for low-speed manuvers. With the Sabre 42 Salon Express, Sabre Yachts listened to its customers and improved an existing hull model to include all the ingredients that define a fine motoryacht: power, performance, outstanding quality of build, and timeless lines. John Snyder is a multimedia journalist specializing in the marine industry. He lives in midcoast Maine.

Are you looking for a basket case?

A Letter from the Publisher - Issue 120