Other migratory fish get more attention than the American eel. Salmon is the king of fish; the alewife, the fish that feeds all; shad, the founding fish. Sturgeon are dinosaurs; smelt, the ice shack fish. Yet, historically, the eel was more widespread and abundant than any of these in the northeast United States. The undeserved neglect is likely a result of the eel’s snakelike nature, or perhaps because more than any other species of sea-run fish, the eel has evaded human explanation and understanding.

And so, around the world, the eel is a metaphor for the elusive, the slippery, and the mysterious, mostly because of its unusual life cycle. 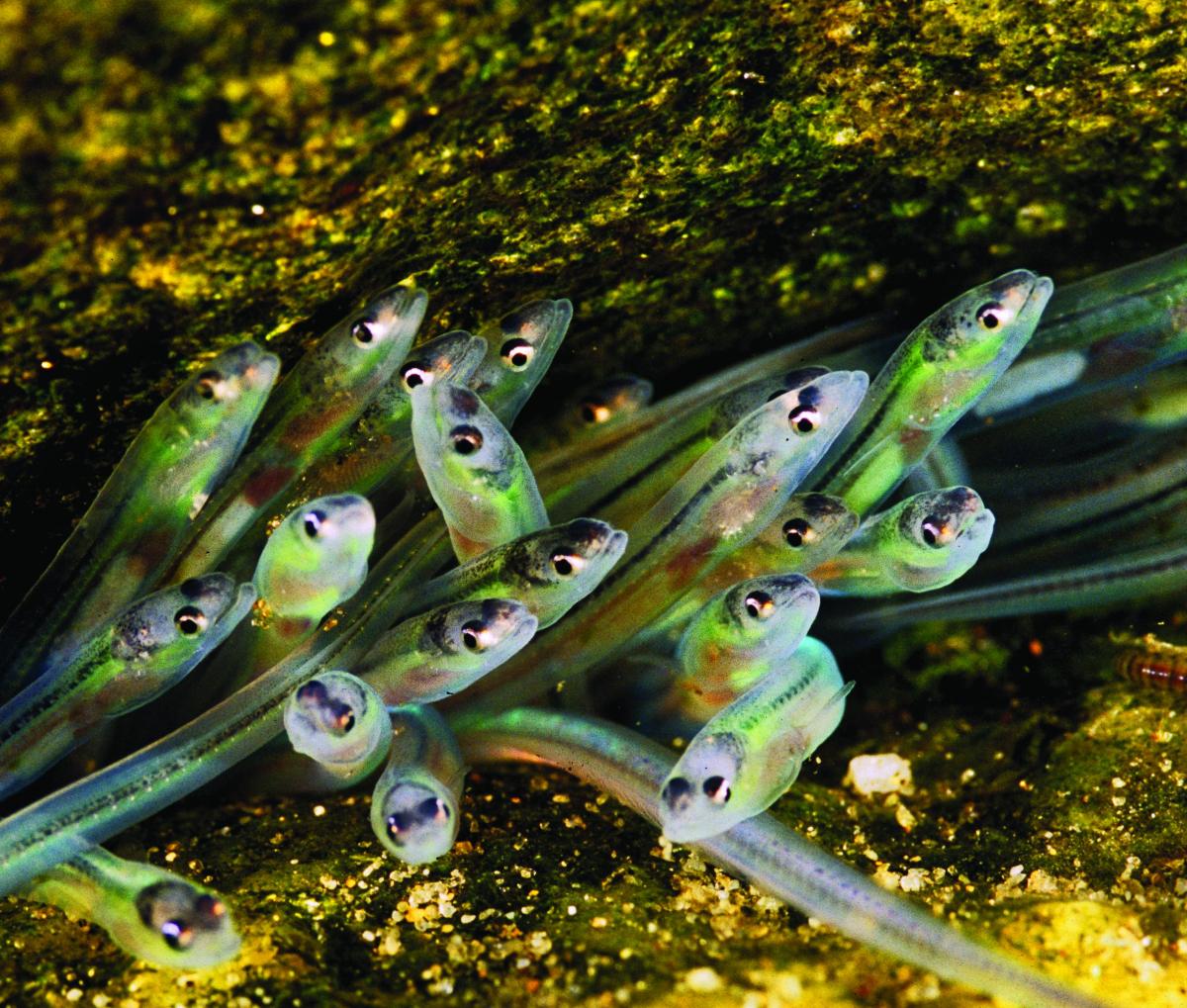 Eels begin their lives in the Sargasso Sea and then migrate to the eastern coast of North America as leptocephali—clear and flattened and very small. When they get the first hints of fresh water, they begin to transform into the glass eel stage. At this point they are 2 to 3 inches long, the thickness of spaghetti, and clear as glass. This photo was taken at the mouth of a creek in Boothbay Harbor.

The American eel, Anguilla rostrata, differs from the other migratory or sea-run fish that live in Maine because it goes the opposite way: instead of living its adult life in the ocean and entering fresh water to spawn (a lifestyle scientists call anadromy), the eel hatches in the ocean, spends most of its life in rivers and lakes, and then migrates back to sea (catadromy). 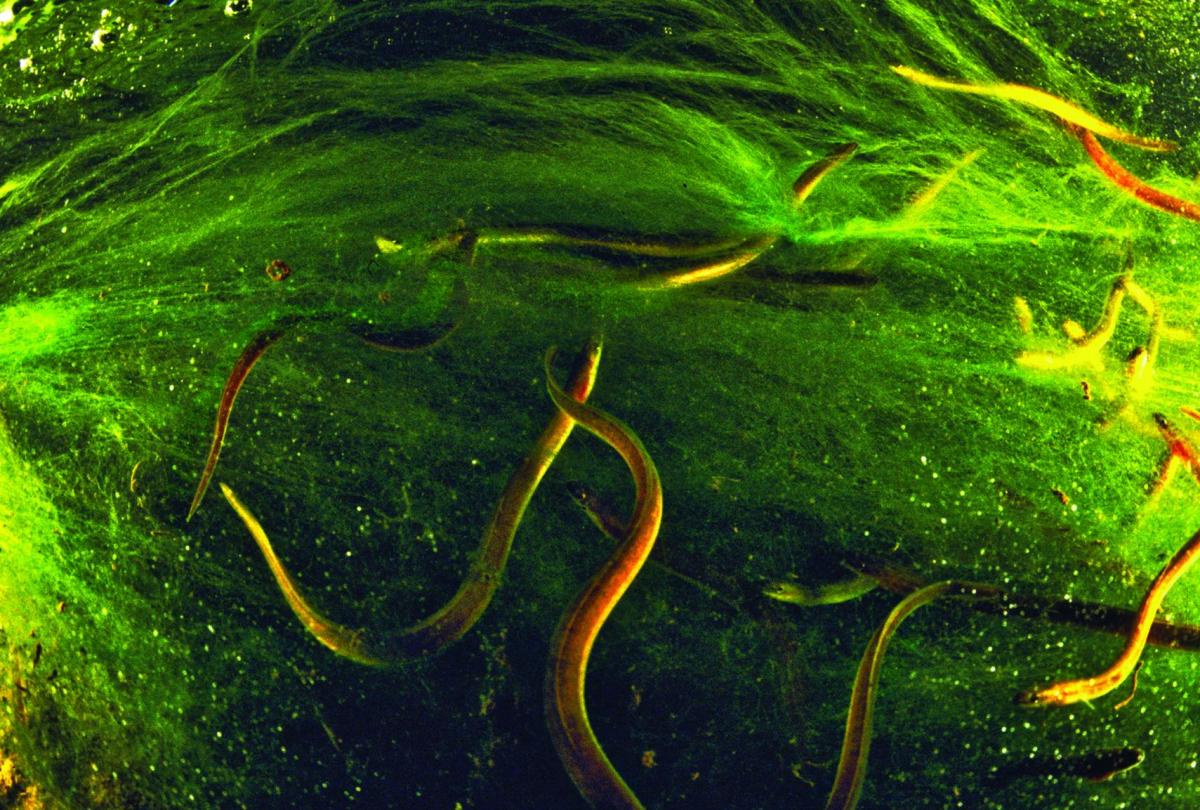 Yellow eels are the freshwater life stage between elvers and reproductive adults. These were filmed late at night in an algae bloom on the Sebasticook River in Winslow.

Maritime encounters with larval eels, flat and transparent willow leaves with teeth, led scientists to narrow down the eel’s spawning grounds to the Sargasso Sea, an area of the Atlantic Ocean north of Puerto Rico. The presumption is that all American eels—the species ranges from Greenland to Venezuela—travel to the Sargasso, which overlaps slightly with the Bermuda Triangle. It’s an extraordinary journey, considering the eels must retrace the route they took as larvae and, once there, die after spawning. 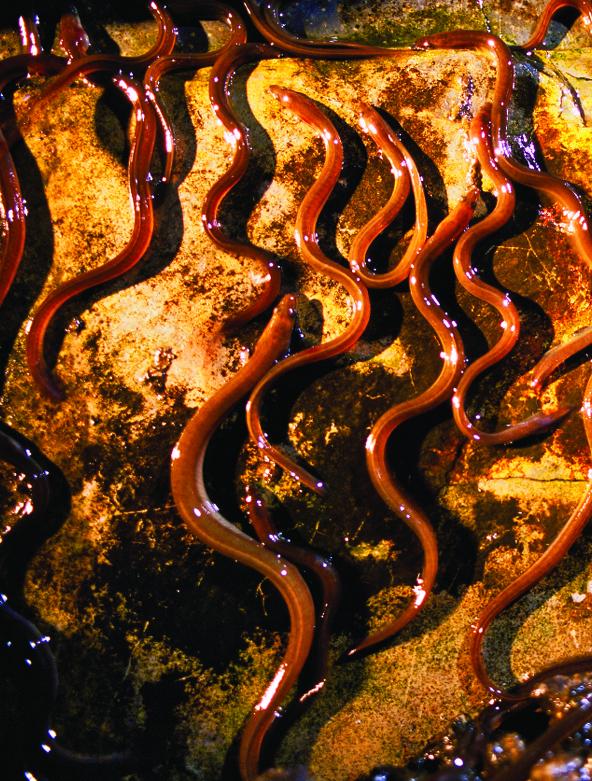 Migrating ever upward, mostly at night, adolescent eels can even climb dam walls. For nearly a century, scientists have searched these waters for adult eels. One such researcher, James McCleave, professor emeritus at the University of Maine, participated in several cruises to the Sargasso, the most recent in 2007. The researchers found nothing but floating patches and strands of Sargassum seaweed. Then, in October 2015, a team of Canadian researchers (some of McCleave’s colleagues and former students) reported tracking an adult eel—one of several dozen affixed with satellite tags—from Nova Scotia to Bermuda, the first hard evidence of the eel migration. One tagged eel, the only one that survived, traveled 1,500 miles in 45 days in pretty much a straight line.

While spawning activity remains undocumented, larval eels appear in the ocean currents in and around the Sargasso. After making a genetic note about how to get back someday, baby eels ride the Gulf Stream north.

They spend about a year in the drift, somehow crossing the Gulf Stream and finding their way into the Gulf of Maine. During that time they transform into two- to three-inch long glass eels that can swim upstream through estuaries (moving upstream with each flood tide, mostly at night). A darker, brownish-green color and four or so inches long, at this phase they are known as elvers. In Maine, this migration occurs between March and June, triggered by spring’s warming temperatures and high river flows that carry the scent of land. Those elvers that escape the nets of commercial fishermen (see sidebar) grow into adult yellow eels. At this stage, the eels become male or female,  a differentiation influenced by the environment. In southern areas where warm temperatures lead to faster growth and where densities of eels are higher, more become male. Males are smaller. A northern clime, and lonely but clean headwaters and remote lakes, favor the female tendency. Northern females are also larger.

At some point, after at least six years and perhaps as long as thirty, the yellow eel is ready to migrate back home to the Sargasso and mate. It changes color again, turning metallic black-yellow, with thick skin and large eyes to facilitate migration. These adult eels, now known as silver eels, leave their freshwater homes in fall and make their way back to the Sargasso.

It is not known how eels determine exactly where to stop and find a mate. According to James McCleave, there is  “an idea that some oceanographic frontal regions, where temperature and salinity changes, might serve as oceanographic signals—a feature that eels might detect. Multiple researchers have found lots of larval eels in and near these fronts.”

As with salmon and shad, the eel’s migratory habits are affected by humans. Hydroelectric dams are particularly damaging, as adult eels are killed or injured as they move through turbines. Fishing and habitat loss, parasites, and pollution are additional threats. Their long life and tendency to accumulate fat makes eels vulnerable to heavy metals and other toxic chemicals that build up in body tissue over time.

The International Union for the Conservation of Nature has placed the American eel on the “red list” of endangered species. Several citizen-driven petitions to designate the eel as endangered in the United States so far have failed. 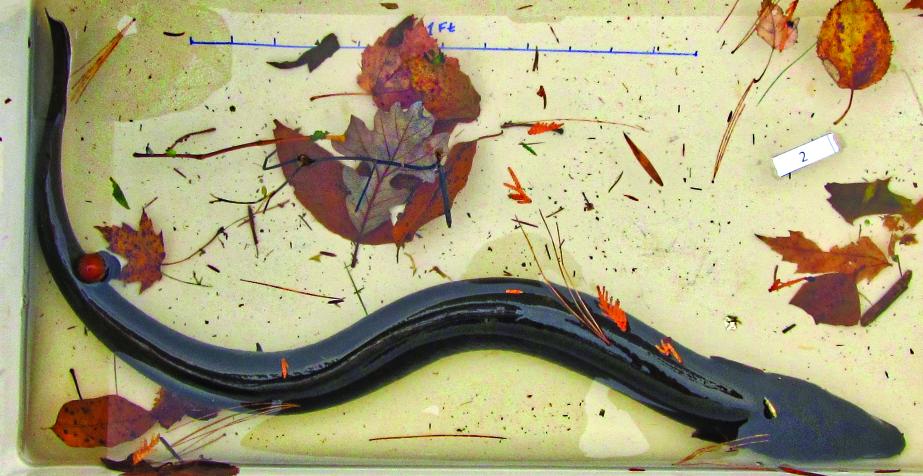 Researchers from the University of Maine have been tagging eels such as this two-foot long one to learn more about their migration.

Emily Thornton, a first-year Ph.D. student at the University of Maine, has been working with fish biologist Joseph Zydlewski to study eels in Maine rivers. In the fall of 2015, they set up a weir in Souadabscook Stream, a tributary of the Penobscot River, to trap migrating eels. They tagged the eels, and put them in the Penobscot River above Milford Dam to test how and whether they get through the dam safely.

The tags transmit signals to an array of hydroacoustic buoys placed throughout the river. The same buoys are used by multiple agencies and researchers to track salmon, sturgeon, and other fish. “We don’t have a good, consistent idea of how these fish make it through various hydro projects,” said Thornton. While she is looking at survival specifically at Milford Dam, which is now the first/last dam on the Penobscot, Thornton said that what they can learn about migration would be applicable to fisheries management throughout the region. “If we can identify migratory cues like how many are leaving, and when, there might be implications for management.” For example, if scientists find that most of the eels leave on a few nights with certain conditions (rain, high-flowing rivers, new-moon darkness), managers can shut down hydroelectric turbines on those nights to spare the eels.

Thornton said that eels are “incredibly slimy, really agile” and “tough to work with.” They can move forward and backward. It’s hard to get them to lie straight for measuring. They can swim out of buckets and slither over land.

Eels from the Penobscot River demonstrated this skill in November, when they moved through the rainy streets of downtown Bangor. According to the Bangor Daily News, “A store manager at the Shaw’s Supermarket on Main Street confirmed that the eels were in the store’s parking lot, and assumed they came from the Penobscot River across the street. Store employees swept the eels up and returned them to the river safely.”

This mature, or silver eel, was photographed in 25 Mile Stream, north of Benton, on a rainy fall night. The migration of adult eels back to the ocean in the fall is triggered by some combination of rain-swollen rivers, darkness, and cooling temperatures. New research suggests eels use magnetic signals, among other things, to navigate through the open ocean back to the Sargasso Sea where they spawn and die.

Surely this appearance was an encouraging sign of eel resilience, a characteristic that recently led the federal government to decide not to place the American eel on the Endangered Species List. Citing stable, but depleted, populations, the U.S. Fish and Wildlife Service recommended “continuing efforts to maintain healthy habitats, monitor harvest levels, and improve river passage for migrating eels.”

Thornton’s research will provide more information about eel migration through dams and rivers. She will also look at how much time eels spend in the Penobscot estuary, by analyzing the earbones, or otoliths, of previously sampled eels. The salts in marine water leave a chemical signature in the bone, which grows in layers similar to tree rings. Some eels, rather than traveling to fresh waters, apparently remain in bays and estuaries their whole life.

Eels can take 20 or 30 years to reach maturity, and they only spawn once. Every single eel, then, represents thousands of miles of open ocean travel and an ability to surmount obstacles as they follow an ancient motivation to return whence they came, then send forth in turn many millions more of their own.

Adult eels once were a popular food source for ancestors of the native Wabanaki people, who fished for eels with spears, weirs, and woven baskets or pots, primarily in fall and winter. An eel weir in Sebasticook Lake dates back 5,000 years. Major eel fisheries took place at Kenduskeag and Passadumkeag streams in the Penobscot watershed. European settlers recognized and quickly began taking the eel, a favored delicacy from their side of the pond. 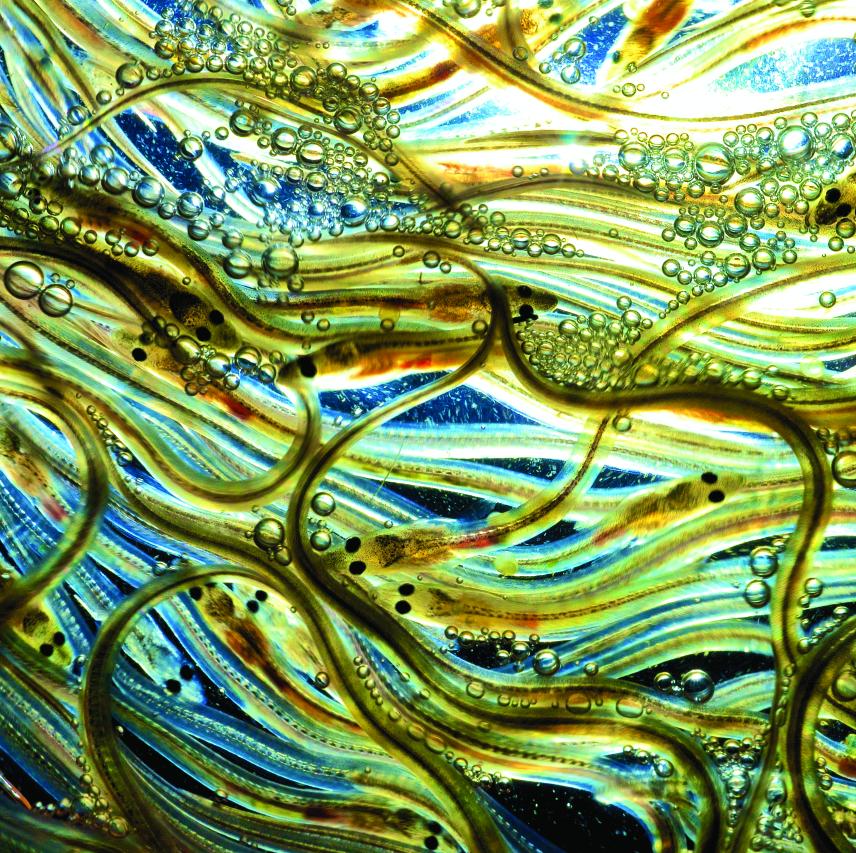 These glass eels have been harvested and are awaiting transport to Asia, where they will be grown to market size. They were photographed in an eel buyer’s holding facility in Woolwich, Maine. According to the Maine Department of Marine Resources, Maine’s eel harvest peaked in the early 1900s. Though populations have declined, those looking to fish for eels (defined by the state as larger than nine inches) for personal consumption can take “up to 25 eels per day from the coastal waters of the state by spear gun, harpoon, pot, or hook.” A special eel license is required for commercial fishing, which is done only with eel pots (traps).

However, the majority of commercial fishing takes place for the juvenile elvers (defined by the state as an American eel that can pass through a 1/8-inch-mesh net). Caught with hand-held dip nets and funnel-shaped “fyke” nets anchored to river banks, elvers are sold to dealers in Asia, where they are placed in constructed ponds and raised to adulthood for the seafood market. While most stay in Asia (Japan even has a traditional eel-eating holiday), there is a chance the “unagi” you enjoy at a sushi restaurant started its life in the Sargasso Sea, traveled to Maine, grew up in China, and was shipped back to Maine in a frozen package. Declines in Japanese and European eel species, disruption of the Japanese eel industry due to the 2011 tsunami, and popularity of sushi have all contributed to higher prices for Maine elvers ($900 a pound in 2011; $1,800 in 2012; $2,500 in 2015). High prices led to a “Wild West” scenario in the Maine fishery for several years, until the state implemented license and harvest restrictions, swapped cash for a credit card-type payment system, and cracked down on poaching and other criminal activity.

Despite elvers being a relatively “new” fishery in Maine (since the 1970s), there is something fitting about seeing nets in the rivers, and watching men and women work the midnight shores by lantern-light, making a living from what the sea offers.  —CS

Catherine Schmitt is Communications Director for the Maine Sea Grant College Program at the University of Maine. She is the author of The President’s Salmon: Restoring the King of Fish and Its Home Waters, published in 2015 by Down East Books.