Helping others navigate their lives

Bobby Ives likes people, and he really, really wants to help. He also loves boats, and he is convinced that boats help people.

Ives has been a teacher at a one-room school on Monhegan Island, a volunteer minister on Matinicus, and a homesteader on Louds Island. He started and ran a unique boatbuilding school in Pemaquid, and is now the director of spiritual life at Bowdoin College, his beloved alma mater (class of 1969). 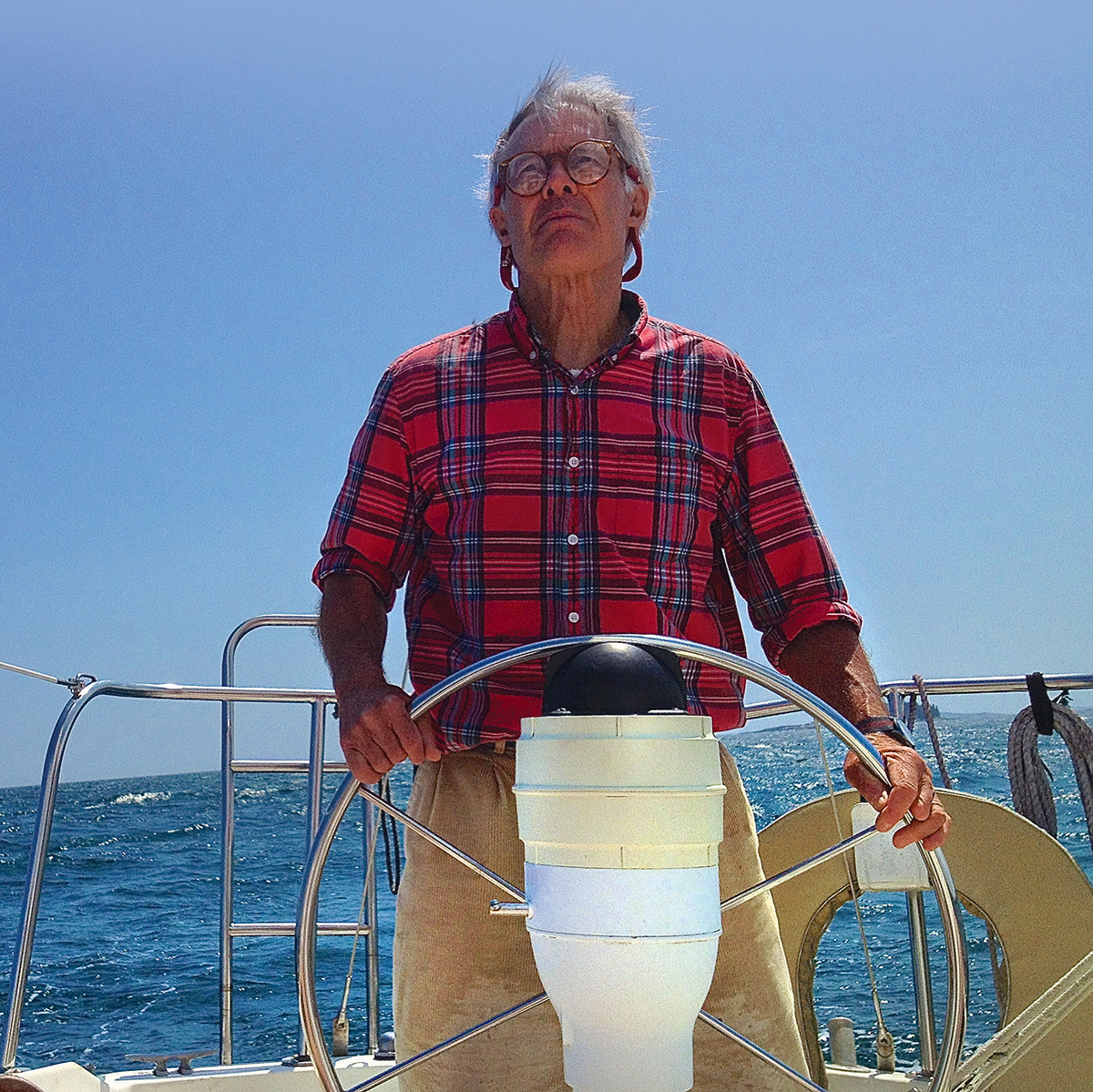 The Rev. Bobby Ives is an avid sailor. This photo was taken on his 26-foot Pierson during a sail last summer on his birthday. On the way home, the winds picked up, his son Jonathan Ives recalled: “Steering a straight course with a large following sea takes serious concentration to prevent an accidental jib. We were all hunkered down as the mainsail would luff from time to time and we worried the boom would swing across, like a batter swinging for the ball. That is why the photo was taken from below.” Photo by Jonathan Ives

His parents died when he was in high school, and he was raised by his grandmother, Hilda Libby Ives, the first female minister ever ordained in Maine (1929). This spiritual connection runs in the family—his father was also a minister as are two of his brothers. In school during the Vietnam War, Ives became a Conscientious Objector. It was the start of a long life spent thinking outside the box.

“I was in high school at Deerfield Academy in Massachusetts,” he said, “and you had to register for the draft when you turned 18…. I applied to the Northampton, Massachusetts, draft board to be a Conscientious Objector, and I got it.”

He went on to attend Bowdoin College, and shortly after his 1969 graduation went to work there, recruiting African-American and Native American students. “Believe it or not, my work in the Bowdoin College admissions office ended up being my work as a Conscientious Objector,” he said.

Eventually, though, his official Conscientious Objector status made him uneasy—it felt too much like cooperation with war. Ives handed back his CO card. The Northampton Draft Board was not impressed by the young idealist. “The draft board punished me. They put me in the army,” Ives recalled. The only problem was that was illegal. “The Supreme Court had already decided that no draft board could use the draft system as a means of punishing a registrant. They were supposed to go through the criminal justice system,” said Ives. “So I took them to court in Northampton. It was a very simple case to win. They were furious with me for doing that.”

Ives wanted to attend graduate school in theology at the University of Edinburgh. But when he asked the draft board for permission to leave the country, he was turned down.

“They said, ‘If you go, you will never come back to the United States again.’” I said, ‘That’s not my decision, that’s your decision. I love this country, and everything about it, except a few policies. If you want to find me, I will be at this address.’”

So he went to Scotland, and became an illegal alien. Eventually, he received a Masters of Divinity degree at Edinburgh. Even more important, in his second year there, he met Ruth. They were married in 1973 (Ruth died in 2006 and Ives remarried in 2010). Eventually the draft board relented, and before long the couple found themselves teaching at a one-room school in Maine on Monhegan Island, where Ives also served as minister. Following that, they served as ministers on Louds Island, where they had to row across the bay for their groceries. Then in 1979, Bobby and Ruth Ives started The Carpenter’s Boat Shop in an old chicken barn in Pemaquid, Maine.

“When I was a student at Bowdoin, I thought that I would be involved in starting a place, probably on a farm, for individuals who had needs, who had been—if not orphaned literally, maybe orphaned spiritually, socially, in different kinds of ways—to give them some grounding,” Ives said. “I guess it was a kind of Socialist ideal. Probably the idea appealed to me because so many people had been so helpful to me.”

A manufacturer of small wooden boats, The Carpenter’s Boat Shop is at the same time a school, a social experiment, a political statement, a place of emotional refuge, a preserver of traditional skills, and a ministry in the truest sense of the word.

Participants in the program, who are called apprentices, live there for nine months—one full academic year—and they learn much more than the fine art of wooden boat carpentry. Apprentices pay no tuition or grocery bills, nor are they paid for their work. Together they garden, cook, and eat; together they learn to use and maintain hand tools, create beautiful and reliable vessels, and test those skiffs, dinghies, and peapods on the water.

To set out over deep water in a boat that you built yourself is an action laden with many layers of meaning. “There’s nothing like carpentry,” said Ives. “To be creative rather than destructive—to be building something—is good for people who have been through difficulties or sad times. Of course, the boat shop isn’t just for people with problems. To be able to build a boat that a person’s life depends on, and to put something together in a beautiful way that’s very functional—that’s really meaningful,” he said. “The launching of a boat is the launching of a lot of apprentices, a new start. As you’re building your boat, you’re really building your own life.”

Ives retired from the boatshop in 2012 and went back to his alma mater as its first-ever director of religious and spiritual life in 2013. Rev. Kim Hoare, who first came to Pemaquid as a boat shop apprentice and went on to obtain a Master of Divinity degree from Yale, has taken his place.

In his new job at Bowdoin, Ives works with the eight faith groups on campus, “helping students chart and navigate their religious, spiritual, and ethical lives,” he said.

Ives officiated at the wedding of a friend of mine recently, and one of the folks in attendance couldn’t resist a boatbuilding metaphor: “If Bobby puts it together, it’ll float.”