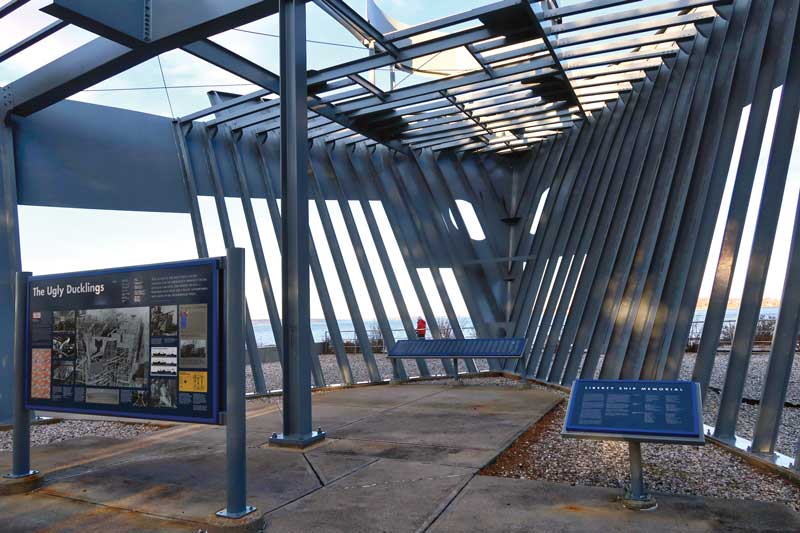 On a sunny December day in South Portland’s Knightville neighborhood, Cia Café on Ocean Street was bustling. A couple of Carhartt–clad men eating sandwiches at a high top were discussing thru-hulls and a boat to be hauled. At nearby tables, diners conferred over open laptops. Two patrons were settled into lounge chairs with their ear-buds and tablets, while others browsed shelves of handmade gifts. As new customers arrived, the woman behind the counter greeted most of them by name.

“The café is the heartbeat of Knightville,” said Julie Bernier, who creates and sells colorful prints and designs at Earth Angel Arts, her shop and studio across the street. “Everyone gathers there. I love going in and seeing my friends and neighbors.”

The same energetic camaraderie can be felt throughout Knightville, which is set on its own small peninsula just east of the Casco Bay Bridge, across the harbor from Portland’s Old Port. At its center, Ocean Street—South Portland’s original downtown—has grown in recent years into an appealing shopping destination as new boutiques, studios, restaurants, and even a craft brewery have hung out their shingles. Now numbering over two dozen, many of the enterprises are owned by artists and makers who have proclaimed Knightville the SoHo of SoPo.

It’s always been a hardworking, unpretentious neighborhood. In the 1800s and early 1900s, residents walked the short distance from their modest houses to numerous yards along the shore to build wooden sailing ships. During World War II, locals joined a crew of some 30,000 men and women at South Portland Shipbuilding Corp. (later New England Shipbuilding Corp.) on Cushing’s Point in Ferry Village, the next peninsula east of Knightville. Between 1941 and 1945, 236 Liberty Ships and another 30 British ocean-class cargo ships slid down the ways here—sometimes several in one day. Measuring 441 feet long, Liberties could carry about 3,000 Jeeps or 440 tanks. 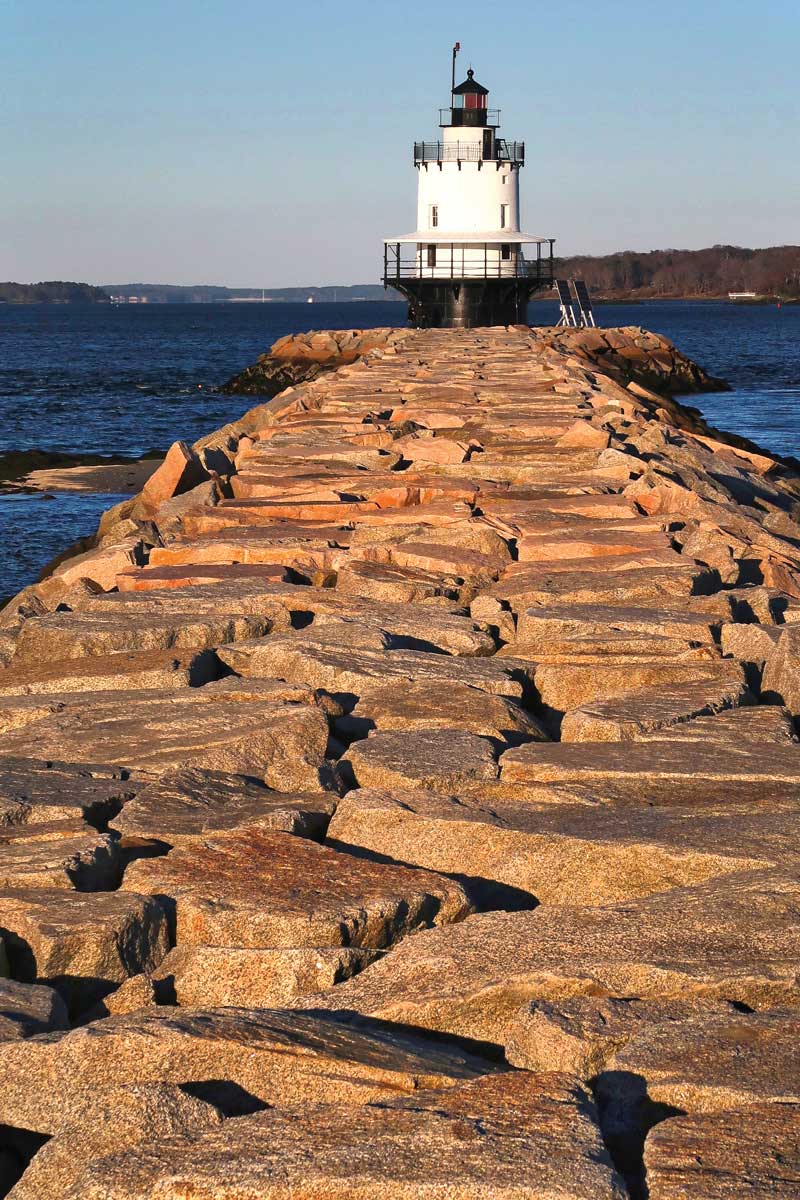 At the tip of a 900-foot-long breakwater, Spring Point Ledge Light marks the way into Portland harbor. Photo by Mimi Bigelow Steadman I tried to picture that beehive of activity when I visited the Liberty Ship Memorial at Bug Light Park, located a few minutes’ drive from Ocean Street on the former site of New England Shipbuilding. The 60 or so structures are gone, but the memorial, tucked into a shady copse, provides an evocative reminder. A slightly scaled-down, 35-foot-tall, 65-foot-long skeletal sculpture of a Liberty ship’s bow, it’s positioned facing the water, since the vessels were launched bow-first.

At the opposite end of a parking area that is shaped like the profile of a Liberty ship, the elegant, 26-foot-tall Portland Breakwater Light overlooks the harbor. Built in 1875 in the style of a classical Greek monument, it’s dubbed Bug Light because of its petite size. The park’s green sward and gardens are home to a variety of annual events including a kite festival that attracts some 15,000 people every May.

My lighthouse tour continued about a mile farther east, where Spring Point Ledge Light (accessed through the campus of Southern Maine Community College) stands sentinel at the tip of a 900-foot-long breakwater. Called a sparkplug lighthouse because of its shape, it’s adjacent to the ruins of Fort Preble, built just before the War of 1812 and manned during the Civil War and World Wars I and II.

The day’s explorations had piqued my desire to delve deeper into South Portland’s back story. “We have a very rich history here,” declared Kathy DiPhilippo, Executive Director of the South Portland Historical Society, which operates a small museum across from Bug Light Park. “And there’s so much going on here now, too,” she added, “with the arts, restaurants, breweries....” Indeed, I thought, the current chapter in this story may be the best of all.

Visiting boaters have a variety of options. Floats at Thomas Knight Park, tucked beneath the Casco Bay Bridge at the bottom of Ocean Street, accommodate four or five boats in the 20-foot-long range (first-come, first-served; free daytime tie-up; donation for overnight stays). Slips are available across the street at South Port Marine, which also has a chandlery and service department. Nearby, Sunset Marina offers slips, dockage, and service. For those looking to launch a boat, there’s a public ramp at Bug Light Park. Spring Point Marina (owned by Port Harbor Marine) provides full amenities to transient yachts plus haul-outs and repairs. It also manages the adjacent Breakwater Marina.

Cia Café and Verbena, both on Ocean Street, serve thoughtfully made food and a welcoming atmosphere. In a converted garage at the bottom of Ocean Street, the brewpub at Foulmouthed Brewery (one of three craft breweries in town) draws an enthusiastic clientele. Across the street, next to South Port Marine, Snow Squall has long been a destination for water-view dining. Saltwater Grille (at Sunset Marina) and North 43 (at Spring Point Marina) also feature exceptional dining on the water. All three offer dockage while dining.

Open daily, late April through late October, the historical society’s museum in the Cushing’s Point House includes exhibits on shipbuilding, lighthouses, the sardine-canning industry, and the Civil War. This summer’s special exhibition explores the history of local trains and trolleys.