Not many people know Matinicus Island exists and a lot of the people that live there like that just fine. It’s secluded—18 miles off Maine’s coast and two hours by Maine State ferry out of Rockland, which only makes four trips to the island per month during the summer, and that depends on tide and weather conditions. The island is only two miles long with no stores or hotels, fewer than 50 houses, only dirt roads, and around 200 people in summer and maybe 30 in winter. Lobstering is the main industry.

Many years ago, my brother Carlos and I visited Matinicus for a vacation. While there we decided to kayak to Criehaven, another island about a mile away. We paddled a tandem Folbot, a two-seat aluminum-framed black rubber and red canvas boat that’s not flimsy but not solid either. 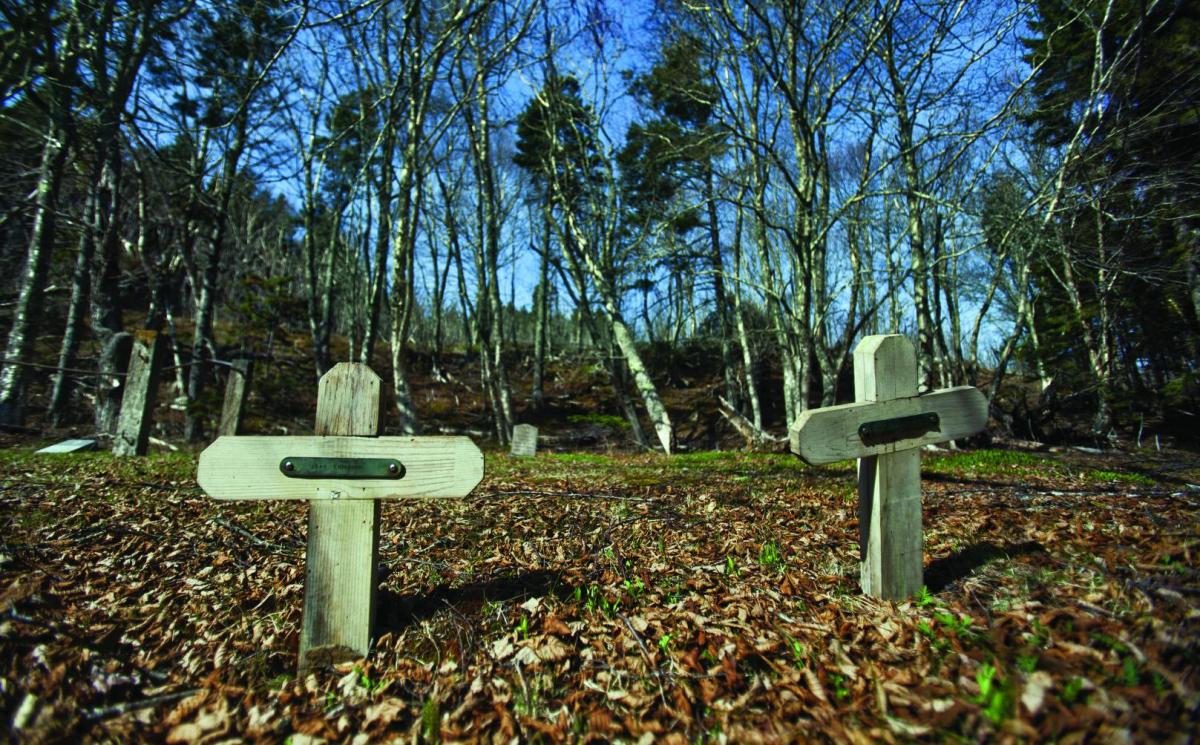 The object of the trip to Criehaven was to find these two wooden crosses in the small cemetery there. Photo by Peter Ralston

It was a little scary being that far out in the ocean, alone, suspended on the liquid surface, a wide cloudless sky overhead. Not greatly experienced and mindful of the ocean’s power I wanted to close the distance and get there quickly. With zero wind and waves it was an eerily flat ocean, the only sound our steady paddling. My unease was mixed with awe and bliss. After we passed the halfway point, I realized we were getting a pass from Neptune and was grateful.

Criehaven has a tiny cemetery. That was our destination—to visit a grave there. You might wonder what two Puerto Rican brothers in their late fifties, born and raised on New York City’s Lower East Side, were doing in a kayak 18 miles out in the North Atlantic? I will explain.

When we were teenagers in New York, the Boys Club sent us to Hurricane Island Outward Bound School, a survival school on Maine’s Penobscot Bay. We had come back to Maine for a visit to the area, and we had another mission, as well.

Carlos lived in Springfield, Massachusetts, where his job involves driving disabled people to appointments and such. He became friends with a retired fireman he used to take to dialysis treatments. It turned out that the fireman was born in the 1930s on Vinalhaven, a larger island in Penobscot Bay. His lobsterman father told him not to fish when he grew up because it was too hard a life. So the kid moved away and settled in Springfield. But he had an uncle who lived, died, and was buried on Criehaven, alongside his wife. Our goal on that beautiful but strangely quiet day was to visit their gravesite.

We paddled into a small harbor, perfectly sheltered from the ocean and fringed with stunted spruce trees. Because the harbor was shallow and the bottom was grey clay, the reflection of the leaves gave the water a silken, milky, gray/green hue. Guiding the kayak past a lone wooden pier, we landed with a soft crunch on a pebble beach fringed with bushes laden with rose hips. Where land met water the low tide had exposed some brownish yellow kelp. We got out of the boat.

A man came up to us and we started talking. He wanted to know what we were up to. We were, after all, in a very out-of-the-way place and had arrived in a kayak.

Well, it’s a small world. It turned out he was a federal auditor who went around to hospitals across the country to check on newly installed equipment. When I told him I lived in Brooklyn, New York, he told me he had been at a hospital a mile from my house just the previous week. That broke the ice. We were no longer strangers.

Eventually we got directions to the cemetery. We walked single-file on a narrow dirt path made somewhat hazardous by protruding roots and jutting rocks. My brother explained why he wasn’t concerned about meeting strangers who might be unfriendly. He said wherever you go, no one will ever bother you if you ask for directions to their cemetery. They’ll figure you’re there to visit and respect their dead. It turns out that besides Neptune, Pluto gives passes too.

Soon we arrived at an old graveyard with maybe ten graves total. Spongy soft green moss surrounded mostly old limestone headstones covered with lichens colored light green, rusty orange, and yellow. Some headstones tilted slightly. No surprise, I thought. They were, after all, old and subject to Neptune’s wrath on this tiny island with a sometimes-angry ocean all around. The newer stones were shiny black granite. These will never tilt, I thought. Stout. But they looked out of place because the predominant granite on these islands is pink. There was an apparent headstone hierarchy at work here. Or so it appears to me now upon reflection years later.

The grave my brother was looking for was not hard to find. It wasn’t stone at all. Instead, it was a wooden slat with the deceased’s name skillfully carved along with his wife’s. I quietly wondered why there was no stone. We paid our respects and slowly left.

We returned to Matinicus, again marveling at the peacefulness of the windless day and the still ocean, smooth and shimmering like glass. Also, looking back on it now, quiet like a cemetery.

Several months later, my brother took me to visit the retired fireman, whom Carlos called a tough Swede. When I asked why, he told me people don’t usually last too long on dialysis and that this guy was a fighter.

The tough Swede’s eyes lit up when we told him we’d been to his uncle’s grave. And at that moment, the visit to Criehaven took on even more meaning. Hearing the fondness in his voice for his uncle’s memory, I felt less like a stranger. We had been to the cemetery; he had not. And we had this story for him. Far off the Maine coast, on a tiny isolated island, a tough Swede’s uncle is buried alongside his wife. And although only a wooden plaque commemorates them, they were loved and are still remembered.

All this was more than ten years ago and I haven’t returned to Matinicus in a long while. My brother is the one on dialysis now. If only he too can be as tough as the Swede.

Jose A. Sosa is a retired attorney who now lives in Florida.