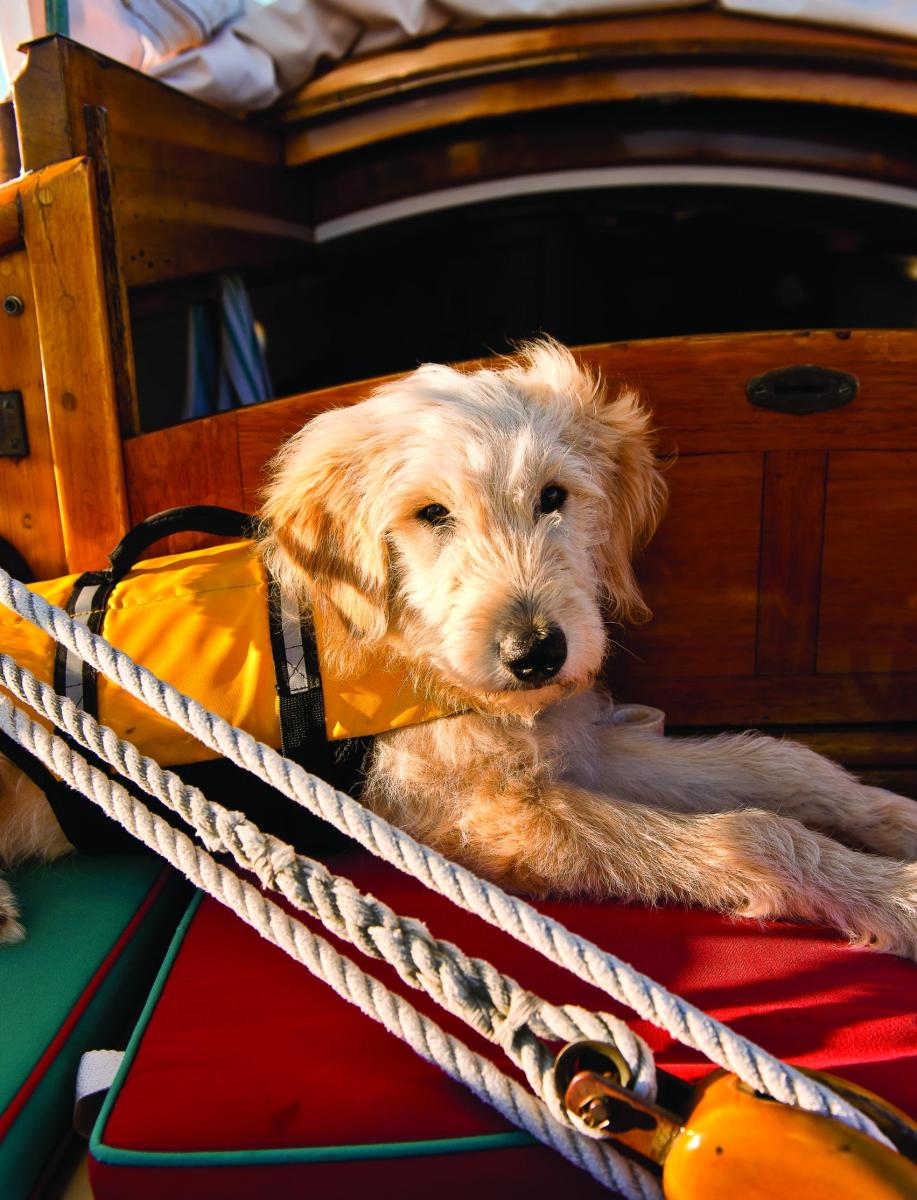 Jib always wears his life jacket when yachting. The handle on the back makes it easy to lift him out of the water if he falls in. In June 2003, our then 15-year-old son Sam brought home a mutt he had rescued from what promised to be a life at the end of a chain that weighed more than he did. Sam grew up and went afield, Rocky grew up and stayed home.

He was a great dog, mid-sized, with an expressive face with the eyebrows and coloring of a Rottweiler; he was gentle, loving, and wicked smart. He understood everything we said, although only let on when what we said suited his canine sensibilities. He slept on couches, snuggled on my husband’s lap on his leather lounger, and shed like a demon all year long.

We are sailors. Rocky was not. Our hearts broke when he died in December 2015, and we determined to go dog-less for a year.

Yet, during those first few months we looked at puppies online, cooed over photos sent by our children of adorable rescue dogs, and thought of having a dog that would love to go sailing with us on summer weekend cruises. We were getting in deep. Our intended dog-less year soon gave way to the intention to get a dog in the autumn, after the next sailing season. 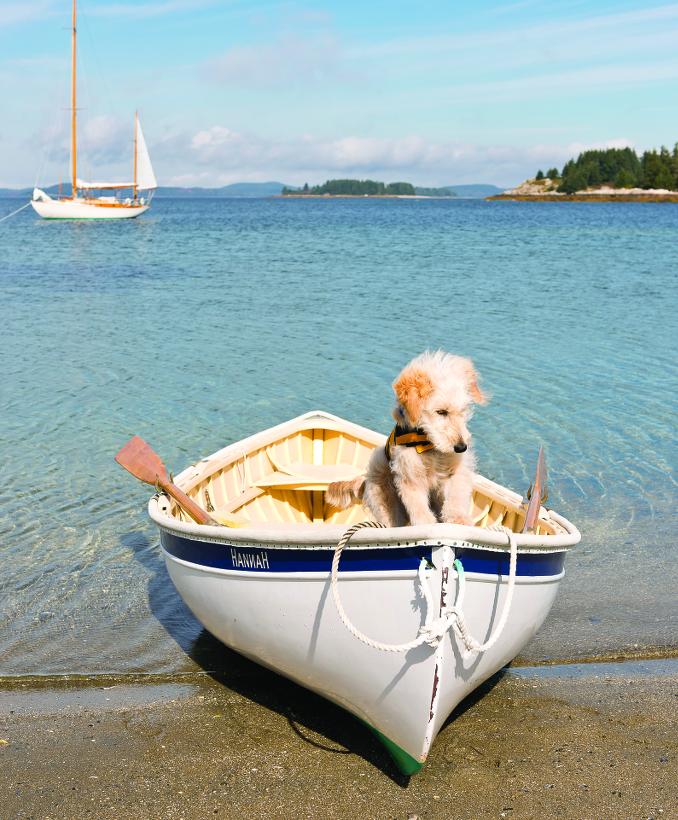 Jib prepares to jump out of his owners’ peapod to do his business. Their Concordia yawl is in the background. Then a clever, dog-loving friend said to me over coffee one morning, “If you want your dog to be a sailor you are going to have to start it as a puppy. If you wait until fall you’ll lose a year. It will be much harder to train a one-year-old to love being on a sailboat.” A good point, and it got things moving right along. Seven months after Rocky left us for squirrels and leather recliners in another world, we came home with a nine-week-old golden doodle who was named Jib by the same Sam who had given Rocky his name.

The question of how to train a puppy to be on a boat led to online research. The two things I came away with were: get him used to a life jacket immediately, and have a mat somewhere on the boat that he learns will be the one and only place he can relieve himself. How to teach him to do that? One of the pet’s owners should pee on it first and he will know that’s the spot. Guess whose job that was? Not mine. I found the tiny-puppy-sized life jacket.

The initial response to the life jacket was melodrama at its best: first Jib fell over to one side, then to the other (granted he didn’t weigh much, but the life jacket only weighed
5 ounces); then he couldn’t sit, or lie down. We let him get used to it at the house before venturing on the boat. Within a week, with life jacket on and pre-peed-upon mat in place, we ventured forth for Jib’s first daysail on our Concordia yawl Starlight. 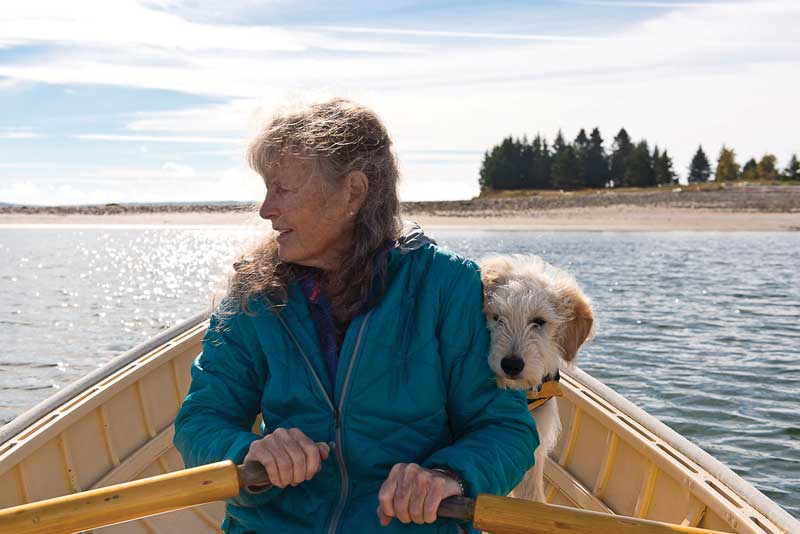 Jib snuggled with us in the cockpit. He was too small to get up or down on the cockpit seats, or to jump over the coaming to get on the deck. We gave him his own cushion, or just held him in our laps. He was immediately comfortable, unfazed by the boat’s movement. On the next daysail we brought a small bed that fit under the cockpit seats where he snuggled comfortably on the lee side. We moved his bed to leeward with each tack of the boat, sliding it and him easily across the narrow cockpit sole.

He entertained himself by gently chewing on the end of the mainsheet and became, in season one, proficient at undoing almost any knot we threw his way. He hasn’t chewed any finished wood on the boat, although he loves well-salted driftwood sticks. In fact the only item that he has chewed a corner off is Cesar the-dog-whisperer’s book on how to raise the perfect dog.

Now that Jib is four months old, he moves freely in and out of the cockpit. If it’s windy we keep him in the cockpit with us because he’s still small enough to be able to slip under the lifelines. He’s moved up two sizes but his life jacket has become a second skin. We lift him by its handle to get him from the peapod to the sailboat and back, and from the cockpit to the cabin and up again. It is even handy for dipping his feet in the water after a muddy low-tide excursion ashore.

He has graduated to overnights on the boat and we have taken several that were  comprised of a sail, a drop of the anchor in one of Penobscot or Jericho Bay’s gorgeous island harbors, and immediate trips ashore—into the peapod, row ashore, a nice walk until business is complete. The longest walks seem to be needed late at night, after dark, when we are ready for bed. He has never, ever stooped to using the pre-peed-on mat, nor has he ever had an accident on the boat.

In early October, on one of our last cruises of this season, Jib jumped out of the peapod to the shore as we arrived at the beach, for the first time not needing to be lifted out. He remained far more focused on his priority of finding the rottenest crabs to chew than our priority on the business end. Oh well. He is teaching patience.

It was a perfect first summer of cruising with Jib and we are looking forward to the next. Maybe he’ll learn to catch a painter, or take the helm, or jump with ease between the boat and the peapod, or he’ll figure out how to get up and down the companionway, or perhaps lose interest in the smelly crabs. We’re just happy that he seems to share our love for being on the water in Starlight.

Deborah Brewster is a long-time resident of Brooklin, Maine where she is currently a selectman. Sailing and reading are high on her list of pleasures. Photographer Benjamin Mendlowitz is her husband.

Tips to keep your sailor dog happy at sea

There are many reasons to bring your four-legged best friend or friends out on the water, but it is important to do so in a safe manner for all. Here are some basic tips.

By Dr. Bjorn Lee (and his dog Scupper)

Life jackets: These are required for most humans and should be standard for your pup. A dog that falls overboard can be difficult to see in the water, and that’s if you realize that your dog just fell overboard! Dogs should wear a life jacket during longer passages, during rough weather, and where the water is cold. Better yet: Make it standard on-board protocol.

Sun and hydration: A long day with little protection from the sun can quickly lead to dehydration, so have water available at all times. And yes, bring the sunscreen. Dogs can get sunburns just like people, especially dogs with light or thin hair coats. The skin on the bridge of the nose and around the eyes is particularly sensitive. Use a sunscreen for children and apply a light coating. Remember that decks can also get hot, which can be uncomfortable or potentially even burn footpads. Booties or mats can help.

Seasickness: Some dogs do get seasick. Help acclimate your dog by taking short trips in calm waters. If your dog is especially prone, speak with your veterinarian about anti-nausea medications.

Poop happens: Dogs can be trained to use pads on the deck. If you are just out for the day and don’t have a pad, remember that your dog may need to go ashore for a break. Be courteous by picking up stool and disposing of it properly, just as you would at home.

Common sense: Having a dog aboard adds one more thing to think about on the water. Weather can change quickly and emergencies do happen. Plan ahead and think through what you would do in adverse situations, and include dogs in your Emergency Preparedness Plans and float plans filed with the Coast Guard or other authorities.

Have a great time on the water. Be safe and have fun—your dog will thank you for it.

Dr. Bjorn Lee founded the AAHA-accredited PenBay Veterinary Associates in Rockport, Maine, in 2005, and provides veterinary care to midcoast communities. Scupper is a Portuguese water dog who loves adventures on the bay, but prefers being in the water to being on it.