A breed rooted in hard work 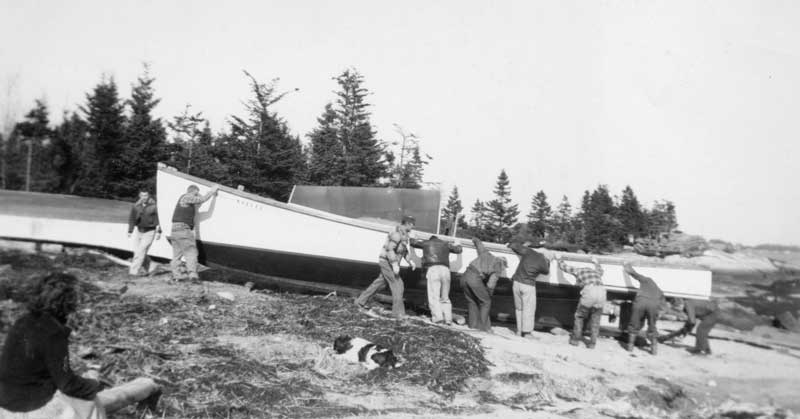 Jonesport builder Will Frost built a number of fast lobsterboats in the 1920s that were long and narrow and sometimes had a torpedo stern. Note the long sheer forward and sweep aft. The low freeboard made it easier to haul pots. Courtesy Penobscot Marine Museum

Getting powerboat enthusiasts to agree on exactly what’s in the DNA of a “downeast cruiser” is a tricky proposition. Most will concede it includes a long sweeping sheer up forward and low freeboard aft, with the house and cabin just a bit forward of amidships.

But that’s a little like saying humans characteristically have two arms, two legs, and a large brain somewhere between the ears. There’s a lot of disagreement on the details.

Maybe downeast style is one of those things where you know it when you see it. Nevertheless, the term is being used often these days to describe powerboats that either are built in Maine and/or feature lines harking back to early lobsterboats.

The concept of a downeast style stems from the early days of commercial fishing along the Maine coast. Without getting into its sail-driven antecedents of the 19th century, suffice it to say the form started out as a mobile platform for working on the water, hauling lobster traps and fishing nets over the side rail. This required plenty of deck room, preferably sheltered from choppy wind, spray, and seas, and the ability to get home safely if conditions deteriorated.

At some point in the recent past the term made the jump from commercial fishing boats to pleasure yachts.

Downeast style has a little extra going for it, said Annie Gray of Gray & Gray Yacht Brokers, Inc. in York, Maine. Even though they sometimes have different ideas about what it means, many of her customers tell her they want this classic look.

The MJM 50z, designed by Doug Zurn, combines classic looks and new technology such as advanced composite construction and a stabilizer that reduces roll. Photo by Billy Black

Safety also plays a role. The classic Maine lobsterboat has evolved into a relatively safe working platform, due primarily to early 20th century experimentation with the full keel configuration that was handed down from 19th century fishing vessels under sail. Unlike many modern recreational powerboats, especially those with lots of cabin space above the sheer line and maybe even a flybridge above that, a lobsterboat’s center of gravity is low to the water—much lower than most common powerboats. The lower cabin structure also limits the power of the wind to knock the hull around. Taken together, the two characteristics keep the tendency to roll in bigger seas to a minimum, as does a keel running the full length of the boat.

There is disagreement over what a downeast cruiser should look like below the waterline. Even longtime fishermen have fierce debates about whether the skeg-built version or the built-down version offers better safely, comfort, and economy, said boatbuilder Bruce Farrin of Walpole, Maine. “Some want the skeg-built (form) and others want the built-down keel,” he said. “I’ve had some long conversations with people trying to decide between the two.” In either case, the boat’s draft ends up somewhere between three and four feet, with the prop well-protected by the keel.

Since 1971, Farrin has been building one-off, custom powerboats up to 45 feet for both commercial fishermen and recreational boaters at Farrin’s Boatshop, with the large majority of them based on classic downeast lines. Without getting into a lot of design terminology, suffice it to say the built-down option offers the chance to lower the boat’s center of gravity a bit more while the skeg-built version can provide a bit more fuel economy—or speed in the absence of fuel concerns, he explained. 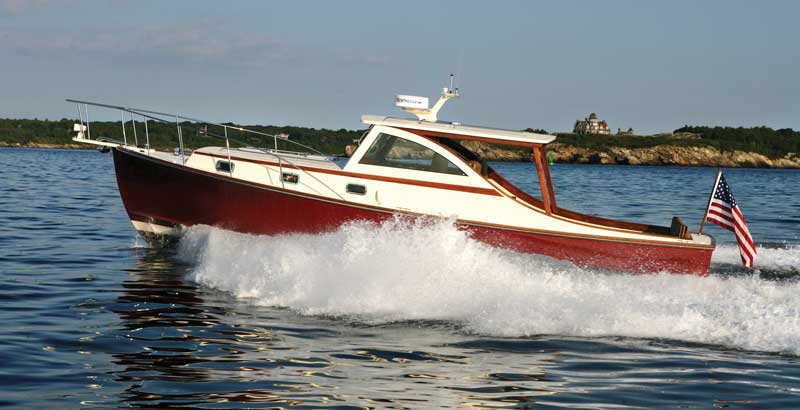 Modeled after classic Bunker and Ellis boats, the Ellis Express Cruiser is another example of the Downeast style; being built in Maine also helps. Photo by Billy Black

Gray, Farrin, and others contend the desire for fuel economy has diminished in recent years, especially for buyers who didn’t live through the fuel shocks of the 1970s and 1980s.

“If they want more power and speed, they just put a bigger engine in it,” said Farrin. While at one time a 400-hp engine was considered adequate, now many customers want twice that much horsepower in the same size hull, whether the boat will be recreational or commercial.

The desire for bigger engines may also stem from the downeast cruiser’s reputation for being relatively slow. With all that extra hull and wetted surface in the water, these boats once hit maximum efficiency at about eight to 10 knots. In the mid- and late-20th century, this suited the fishermen just fine since much of their day was spent going short distances from trap buoy to trap buoy.

The early adherents to the recreational version of a downeast cruiser were content to simply have the boat of their dreams without worrying too much about speed. Today, however, most are looking for more than 10 knots… a lot more. Adjustments to the basic hull shape, most notably the development of the deep-V hull, have improved the boat’s ability to “get up and go.” With more horsepower available, the design’s reputation as a slow boat is fading.

More modern recreational interpretations of the “downeast style” today result in boats with cruising speeds up to 25 knots, almost all of them featuring a deep-V hull. At Sabre Yachts of South Casco, Maine, which also manufactures the Back Cove line, the term downeast is used to describe a line of powerboats that range from 38 to 66 feet. Some of these cruisers even sport a flybridge atop the standard helm station amidships, a further evolution of the downeast DNA, explained Bentley Collins, VP of marketing at the 47-year-old boatbuilding company.

“The sheer line of these boats is there and that definitely is the downeast style,” he said, noting other recreational powerboats often lack the low stern with the upward sweep of the sheer line going forward. 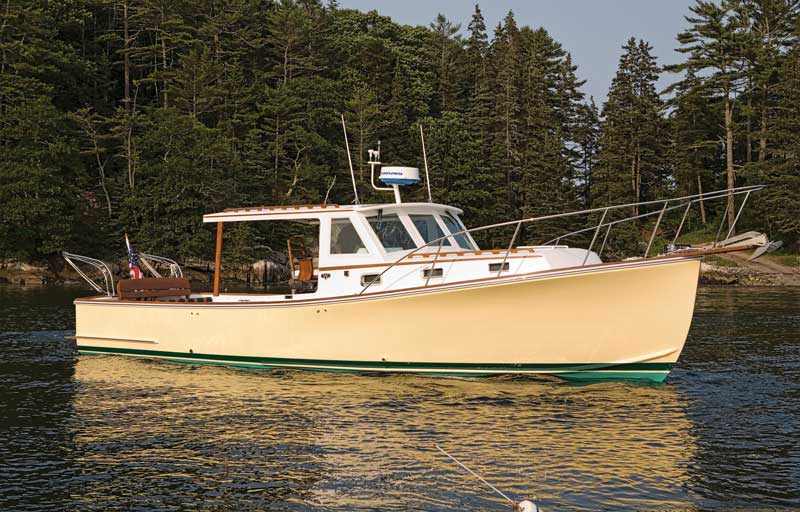 Lobstermen spend long days on the water, making safety and comfort important. The full keel on this Wilbur 34 helps with stability. Photo by Billy Black

Many popular powerboats begin with a higher stern, followed by a brief run of the up-sweeping sheer forward. But when the sheer line gets to approximately amidships, it flattens or even reverses course. This approach allows for more below deck accommodations. But Collins said that is less important to prospective downeast Sabre owners than the downeast style’s safety factor.

Sabre’s downeast models include a generous helm station and lots of aft room in the helm area and the aft deck area. The big difference on Sabre’s downeast powerboat is that the extra space is for the pleasure of guests, the captain, and the crew. On a lobsterboat, it’s for bait barrels, stern workers, and a sizable live well.

Also integral to downeast DNA is the intangible mystique of boats built somewhere along the Maine coast. With elements of the downeast style being copied in places as widely diverse as Florida and Taiwan, many potential buyers insist on a boat built in Maine, period. Gray reports classic Maine-built lobsterboats like a Holland 32, a Duffy 35, or a Northern Bay 36 garner tremendous interest when she lists them. “The phone rings off the hook and they generally sell pretty quickly,” she said.

Scores of other Maine-based builders also build boats with so-called downeast styling. But not all lean heavily on the downeast marketing term.

The Hinckley Company of Southwest Harbor has an entire line of powerboats that feature the distinctive downeast sheer, house placement, low center of gravity, and so forth. In advertising its Talaria brand of boats, however, the 89-year-old company doesn’t use the word downeast.

“We don’t use the word a lot because the style and workmanship and the features are self-evident,” said vice president of sales Phil Bennett, who has been with the company since 1989.

The Talaria brand has been successful since its introduction in 1994, with hulls ranging in size from 36 to 66 feet. The company’s long-standing reputation for attention to detail seems to be paying off. “It’s in the craftsmanship,” said Bennett.

If a boat as big as 66 feet sounds like a lot for the downeast style, it’s worth noting that all the most popular downeast cruiser designs are at least 30 feet in length—even though some builders and designers will incorporate elements of the style in a hull well under that. A smaller boat doesn’t have as much staying power when the wind picks up and seas get choppy. In small boats, spray flies everywhere and rolling becomes a problem. A boat longer than 30 feet generally yields a displacement of five tons or more, which helps smooth the ride out considerably.

Ultimately, the DNA of a downeast cruiser is like that of a human being: With the basics in place, the final, detailed result will vary from individual to individual—sometimes quite a bit. No two are exactly alike and variations on the theme can be pretty significant within a basic structure that includes lots of reserve buoyancy and flare up forward, a sweeping sheer with low freeboard aft and sensible accommodations well sheltered from the elements. Being built in Maine also helps.

And just like human beings, there are certain nicknames you shouldn’t use. “Oh please don’t call them a lobster-yacht,” said broker Gray. “That really drives some people crazy.”

Ken Textor has been living on, working on, writing about and cruising on all sorts of boats along the Maine coast since 1977. He lives in Arrowsic.