Teaching sailing, as well as learning how

Cozy Harbor, located midway down the western shore of Southport Island at the mouth of the Sheepscot River, is almost invisible from the river, obscured from view by David’s Island to its west and Pratt’s Island to its south. Just two-tenths of a mile from end to end, the harbor’s maximum depth at mean low water is nine feet, and that’s just in one spot. Yet within its tight confines lie more than a hundred moorings—home to lobsterboats, recreational powerboats, daysailers, dinghies, and even a 38' Alden yawl. Along the shore are unpretentious, mostly 19th-century houses with the occasional dock and float. During the summer there are so many boats that you could almost hop from one side of Cozy Harbor to the other without ever getting your feet wet, but the harbor is all-but-deserted during the winter, save for a couple of working lobsterboats. 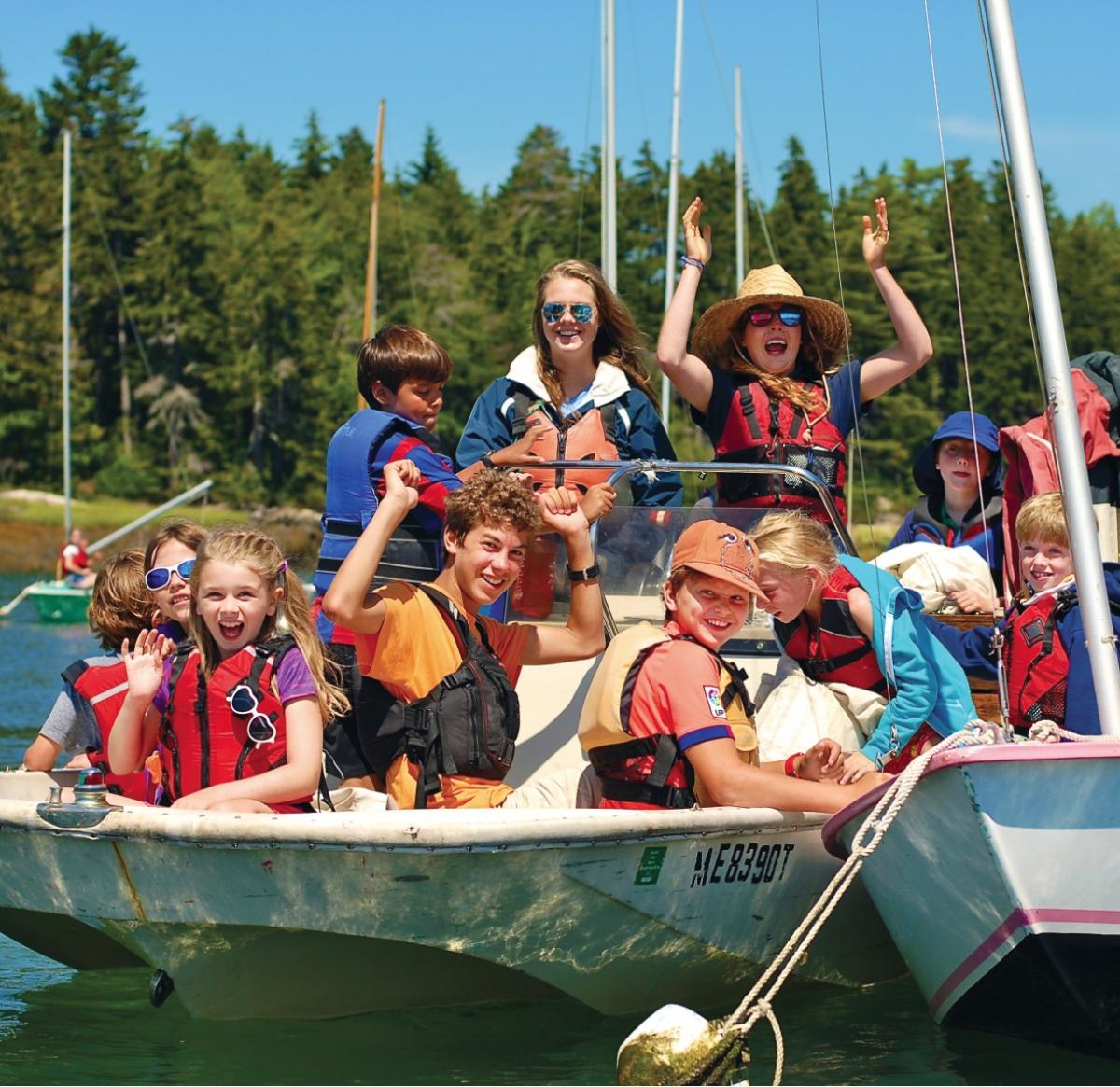 Senior instructors ferry helpers and students ashore for lunch. Many of the instructors—now in their early 20s—have been coming to the Southport Junior Yacht Club since they were 7 or 8. They set the tone for the little ones, some of whom will one day take their place. The story of Southport is the story of midcoast Maine. Once the home of fishermen, the island was “discovered” by wealthy families from the Boston area in the late 1800s. In those heady pre-Great Depression days, the wives and children of the great and the good rode the train to Bath, stepped aboard a ferry, and were delivered to the island’s landings for a summer away from the urban hubbub. Some wiled away the long lazy weeks in hotels such as The Lawnmeer, Newagen Inn, and Cozy Harbor House. Others built private cottages. Still others went one step further and turned their pieces of Vacationland into business ventures. One such was Ezra Pratt. 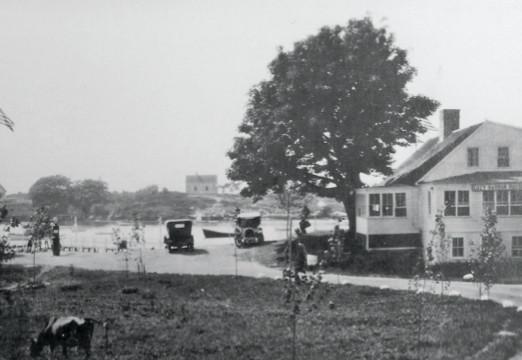 In the early 1900s the Cozy Harbor House was a popular hotel for summer visitors to Southport Island. Photo courtesy of the Southport Historical Society In the early 1900s, Pratt acquired Joe’s Island, renamed it Pratts Island, and divided it into building lots. He also owned Cozy Harbor’s one-time fish store, which he transformed into The Pavilion (also known as The Casino), a local social hub with post office, general store, ice cream shop, bowling alley, and dance hall, all in one. In 1923 it also became the first home of the Southport Yacht Club.

In its earliest iteration, the club was centered around Pratt’s vision of racing outboard motorboats on Sheepscot Bay. There were regular races for boats 19' to 25' long, plus meetings, picnics, and poker evenings. There were an annual regatta, a lobster stew banquet, a clambake, and a dance and beauty contest. Membership was small, however, and by the time of the Great Depression, the club’s days seemed numbered. Then, in 1937, the White family from Malden, Massachusetts, came to the rescue. 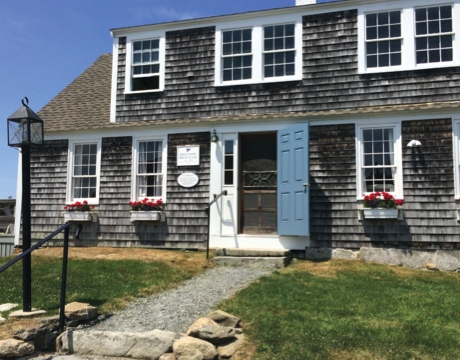 Since 1939 the Cozy Harbor House, now known as the Pierce-Marr House, has been home to the Southport Yacht Club. Photo by Polly Saltonstall In the words of Jack Bauman—history professor, past commodore and long-time member of the club—Don White had “delusions of grandeur;” he dreamed of Southport Yacht Club becoming one of the world’s great yachting centers. It was not to be, but under White’s leadership, three things did happen: the club acquired the Cozy Harbor House, sailboat racing was introduced, and—perhaps most importantly—the Southport Junior Yacht Club was established.

In the 1940s and 1950s the Southport Junior Yacht Club was open to youngsters aged 10 to 18. It appointed its own junior officers and offered limited instruction to its youngest members. When the Junior Sailing Program was introduced in the 1960s, the teaching of sailing took center stage. The boat used was the Turnabout, the beamy 10-footer that remains the foundation of the program to this day. 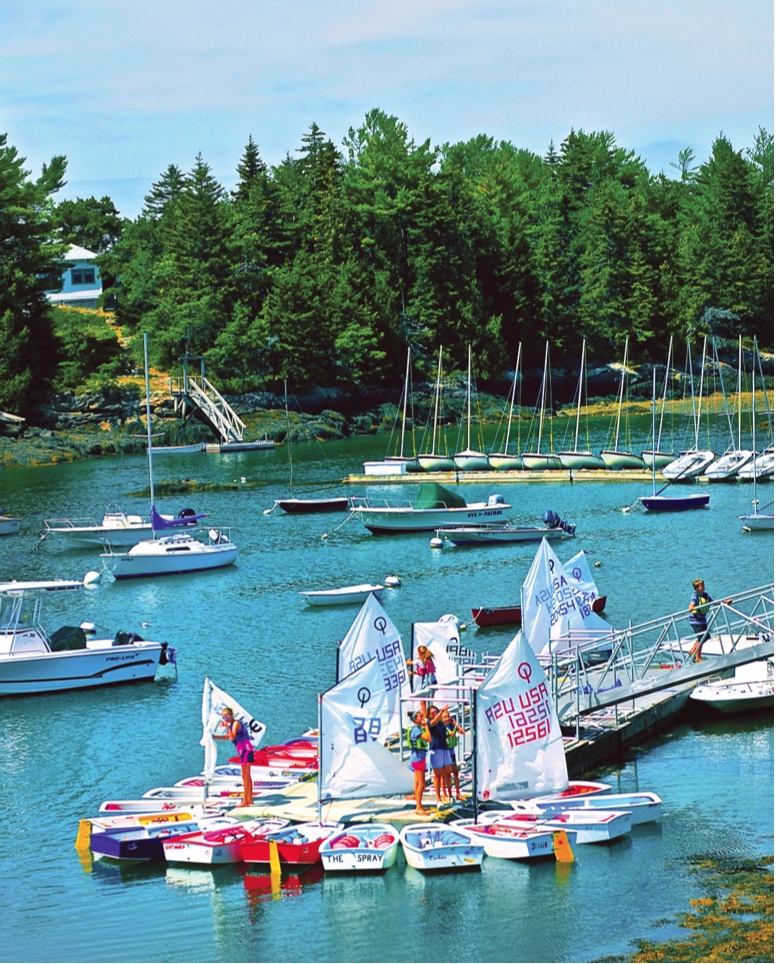 Optimists, privately owned by families of SJYC students, are used in the afternoon program. The Turnabout can be sailed by multiple kids. According to Nancy Custer Carroll, who served as commodore from 2014 to 2016, that was one of the reasons the Southport club made the conscious decision to keep the class even as the rest of the East Coast was switching allegiance to Optimists. “The social benefits of a Turnabout are huge,” she said. “The kids are so young, and in an Opti you’re all alone. But in a Turnabout you’re out there with your crewing buddy, singing songs and telling jokes.”

As commodore, Custer Carroll recognized the importance of involving young members. “There are kids in the sailing program today who are third generation,” she said. “Their parents and grandparents learned to sail in Turnabouts, sometimes even the same Turnabout… that continuity is huge.”

Today’s Southport Junior Yacht Club Sailing Foundation is, on the surface, like most other sailing programs in this part of the world. The program is open to all, to the children of non-members and club members alike, and with one fee for all. There is a scholarship fund available. Kids range in age from 7 to 18; there is a morning program for the younger less-experienced children, and an afternoon program for the older ones. The club uses Turnabouts, Optimists, 420s, and Boston Whalers and their equivalents.

But beneath the surface something very different is happening at Southport: With the exception of Director Will Jacobs (himself a one-time Junior Sailing Program student), the entire program
is run by kids: college-aged kids and younger. And they are all either current members or graduates of the program.

Turnabouts have graced the SJYC sailing program since its inception and continue to be the only class used in the mornings.

“To have an instructor who’s gone through the program, who understands the program, the philosophy, the parents, the community… the connection is very important,” said Jacobs. “So we have afternoon students who come help in the morning class, unpaid. After a few seasons some of those helpers become Junior Instructors; now they get paid to work in the mornings, and then go back to being students in the afternoon. Eventually, Junior Instructors can become Senior Instructors and then they work all day, Monday to Friday.”

There is a generally accepted understanding that if you want to become an instructor, you must pay your dues in the ranks of the unpaid helpers—if you care enough to help out when you’re young, chances are you have what it takes to be a future leader.

The morning program has a maximum attendance of 50 kids looked after by Jacobs, 18 paid instructors, and between 8 and 12 helpers. The students are divided into groups depending on their level of experience, and the senior instructors figure out who’s in which boat and with whom.

Making it fun is huge at Southport. As well as evening events like Ice Cream Socials and Bingo specials, there are weekly happenings from kickball on Wednesday afternoons to Friday Fundays for the morning class. But, of course, learning to sail is always there. The morning program is run exclusively in Turnabouts, two to three students per boat, with the focus on sailing and basic seamanship. On fair-weather days, the fleet goes out of the harbor into the Sheepscot. On less easy days, and especially when there’s fog, the kids stay inside the harbor, learning to dodge and weave among the many moored boats and each other. 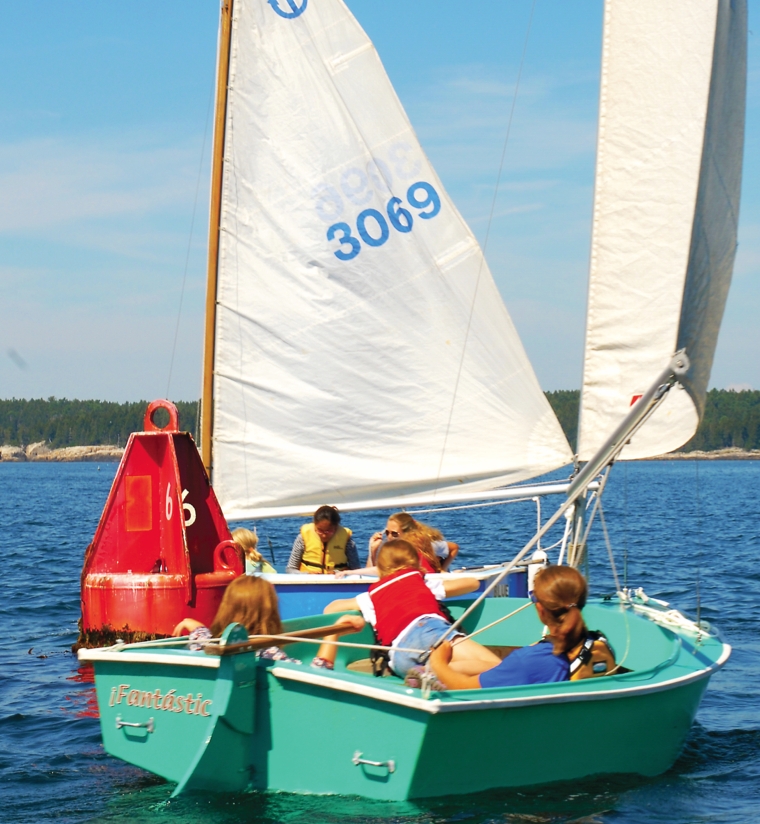 In the afternoons, the fleet is mixed. An average day will see 10 Turnabouts, 20 Optimists, and 10 to 15 420s—at least 55 kids—sailing off the moorings. In 2016 the club added a J/24 to the fleet—some kids will sail the J/boat and nothing else, but the majority will sail it for an afternoon here and there. It’s up to them. The prime focus of the afternoon is on racing, but it is never the only focus.

“We do racing but we do all of the other stuff too: rowing, docking, mooring. We do knots, talk about seamanship skills in terms of being safe and respecting the boat. We talk tides and currents and winds. We have had sailors who go on to sail in college but we have many, many more who’ve gone through here and continue to sail well into adulthood and still love it,” Jacobs said. “Are we producing hotshot sailors? No. We’re producing really strong sailors who love sailing, who appreciate the ocean and sailing.” 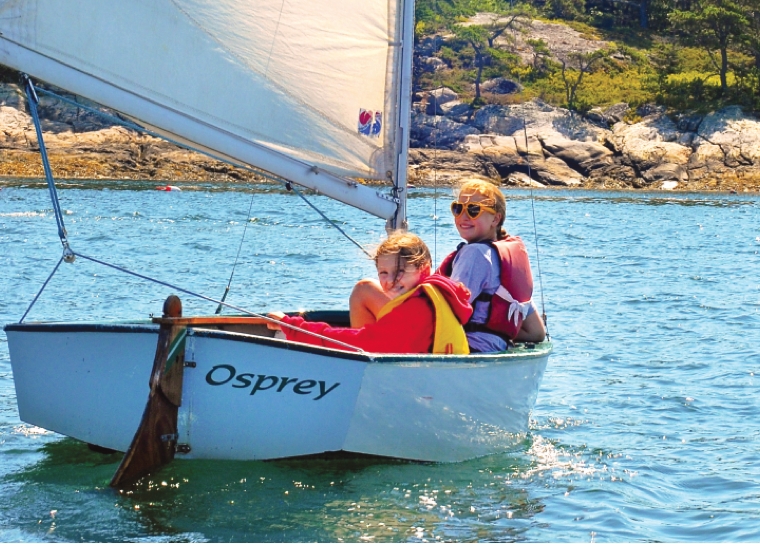 That philosophy is the essence of  Southport Yacht Club. While memberships of yacht clubs up and down the country are struggling or in decline, at Southport the membership continues to grow. 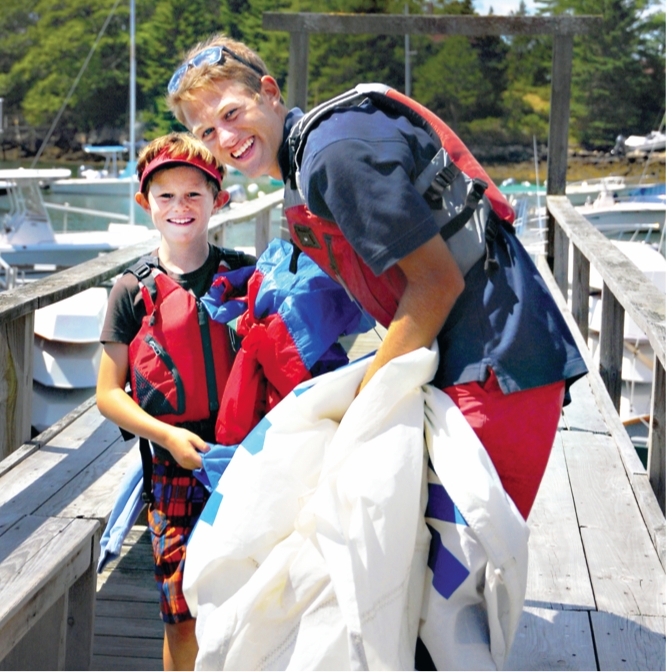 Turnabout sails are brought ashore after every session. Sail furling is one of many skills taught, others include sail trim, knots, rowing, harbor navigation, docking. The kids’ progress through the skills is measured on a “Star Chart” and, for many, earning a star for a particular discipline can be the highlight of a week. “You have to ask why,” said Custer Carroll. “Is it because our annual membership fee is just $175 per family? Maybe… Or is it because of the kids? I think so. Sometimes people ask ‘What do I get if I join?’ And the truth is, very little: you get to put your dinghy on the dock, you get to use the grounds, you get notices about upcoming events. Those are the tangible ‘gets.’ But the intangible ‘gets’ are huge: you become a member of this community that makes something extraordinary happen year after year, you become part of the tradition. It can’t be explained; you either get it or you don’t.”

On a gentle morning in August I joined Will Jacobs in one of the club’s Whalers and we headed out into the Sheepscot to do what he does most summer mornings: watch 20 or more Turnabouts go sailing. We heard small children hurling affectionate insults at one another; we fended off a boat as it came alongside to allow two giggly girls to tell us they were headed in for a bathroom break; we paused to watch a crew execute a series of shaky jibes and saw arms extended for a high-five before the boat turned up onto a reach.

The SJYC students organize and host fundraisers through the summer, bingo evenings and ice cream socials among them. There can be few better places to enjoy a sundae with good friends than on the Southport Yacht Club dock on a summer’s evening.

“You were asking about the core of the Southport Yacht Club,” said Jacobs. “Well, here it is, right here: the love of sailing, appreciating the ocean, and having fun with it. Look around us—there are 50 kids out here having fun on the water, loving sailing. And you know… chances are they’ll go right on loving it for the rest of their lives.”

He paused and looked back to his fleet of small boats. “I’d choose that any day over one superstar who goes on to the Olympics.”

One-time Managing Editor of WoodenBoat magazine, Jenny Bennett has taught small-boat sailing throughout her adult life. A native of Southwest England, she now lives in Seacoast New Hampshire and summers on Southport, Maine.