The psychology and physiology behind our attraction to the water 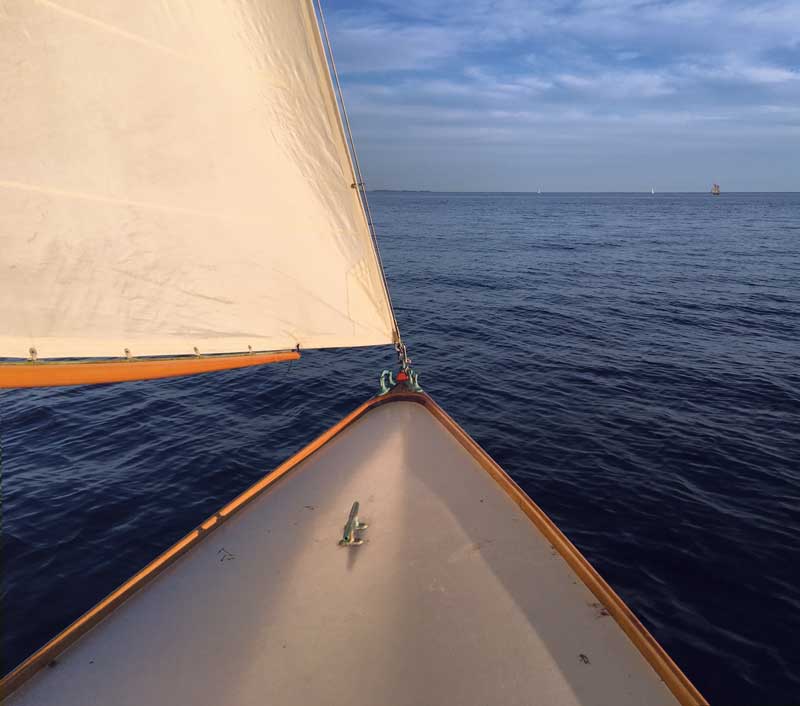 Like the sea itself, the shore fascinates us who return to it, the place of our dim ancestral beginnings. In the recurrent rhythms of tides and surf and in the varied life of the tide lines there is the obvious attraction of movement and change and beauty. There is also, I am convinced, a deeper fascination born of inner meaning and significance. — Rachel Carson, Edge of the Sea

The living world is the natural domain of the most restless and paradoxical part of the human spirit. — Edward O. Wilson

The sand, smoothed by the tide, glitters with flecks of mica and quartz. The beach ends at an outcropping of rocks draped with seaweed and rough with barnacles. Tidal pools of seawater glisten with life: rusty splotches and pink-crusted algae, leaves of sea lettuce, baby fishes hiding in miniature caves. Beyond, the Atlantic Ocean roars.

Spending time near the water is good for our mental and physical health. For many years now, and lately more frequently, scientists from an array of disciplines have studied the effect of environment on our brains and bodies. I’ve read too many studies to list them individually, but the consensus is robust. In the presence of nature, stress and anxiety quickly ebb. The body heals. Mood lifts. Thoughts clarify. Memory sharpens. Attention focuses. The mind expands. 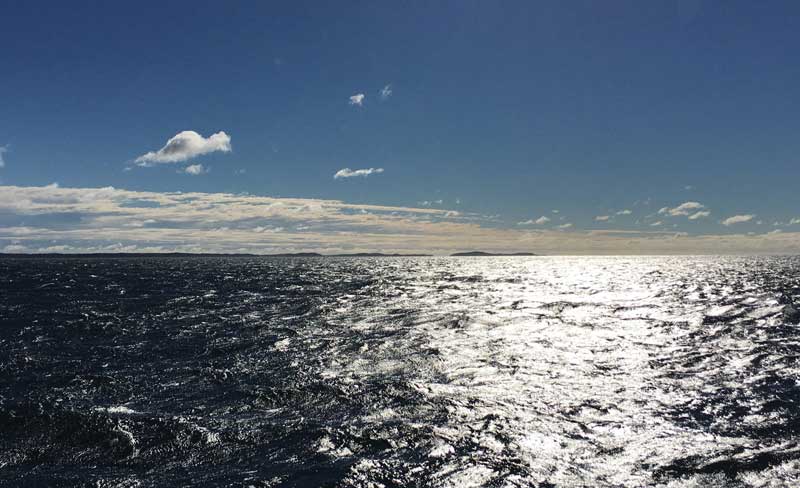 Looking at the ocean can activate opiate receptors in the brain and release dopamine. Photo by Polly Saltonstall

Most studies to date have evaluated the visual effect of green space like parks, trees, or forests. Many of these studies used photographs or simulations of nature, but the effects were always greater with the real thing—and the more sustained the engagement, the better. While water is seldom evaluated separately, and salt water even less often, a focus on “blue space” is emerging, offering both theory and evidence for our instinctive love of the sea.

People the world over favor the color blue, perhaps because it is associated with clear skies and clean water. Certain parts of the brain are dedicated to interpreting color and scenery. Landscapes ranked as the most “scenic” often include a high proportion of blue along with green, some gray, and brown.

Researchers trying to understand the characteristics of visual preferences for scenes have found that we’d rather look at the fluid surface of the sea or rough tangles of vegetation than rigid grids of pavement or lawn. Built environments, devoid of life’s color and texture, are harder for the human brain to comprehend, while natural information appears to be easier for the brain to process. Color helps fasten moments into memories, yet we seem to derive pleasure from an ocean view even in black-and-white, because of the lines, edges, and textures, the layers of sky, water, and knotted wrack.

The detail, contrast, ornament, complexity, symmetry, and hierarchies of an ocean view cascade, from the broad expanse beyond to the lighter shade of shallow water; rows of waves transform into individual lines of foam-trimmed surf. The silvery flash of schooling fish and spiraled shells on the beach reflect patterns—the golden ratio (1:1.618), the Fibonacci sequence—that reveal mathmatical order behind the seemingly chaotic. These same fractal patterns occur inside our brains and nervous systems.

Experiencing the wonder of natural beauty might actually decrease the inflammation that contributes to heart failure, depression, and autoimmune diseases, according to some research. Looking at the ocean activates opiate receptors in the brain, releasing dopamine and its rush of reward. Even when people are in a good mood, they still seek out the water. The thin line where blue meets blue holds the gaze a bit longer, allowing the mind to wander. 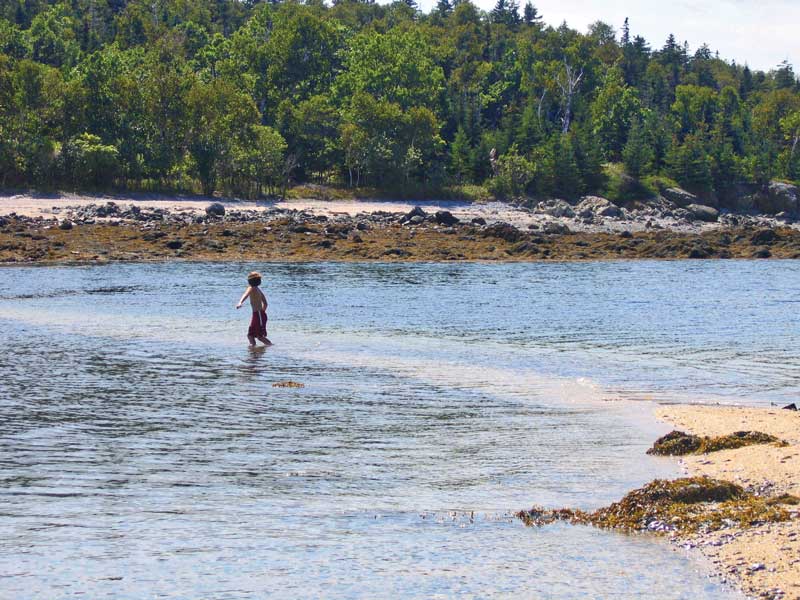 Running through clean salt water at the beach is good for your mental and physical health. Photo by Polly Saltonstall

The ocean provides space for physical activity: people row and paddle, cast lines, haul sails. Children love to run toward the water. We swim, boat, surf, fish, dig, carry buckets of water, build sand castles, bend down to collect shells and hermit crabs. We feel the rocks and sand with our bared feet, smell the brine of low tide, and taste the salt spray. Wading out through the seaweed, salt water soaks the skin—a nourishing ritual sought by fellow humans throughout history.

The ancient Greeks built Aesculapian healing temples on hilltops and promontories overlooking the Mediterranean. The Celts sought remedy in seas, lakes, rivers, and springs. The coast was an important place for Dawnland ancestors of the native Wabanaki people. In 19th century England, France, and America, seaside resorts offered escape from urban contamination and congestion. Salt water heals cuts, and soothes irritated skin. Marine algae have been used to treat burns and other wounds.

There’s more. Breaking waves and splashing surf hydrate the air with negative ions, invisible molecules that have been linked to improved moods, perhaps by oxygenating the blood. Here the conclusions become tenous. Science can only take us so far.

The ocean is where life on Earth originated. Marine phytoplankton provide half of all the oxygen we breathe. The earth is 71 percent ocean water, compared to 60-80 percent of the human body—a similar density that allows us (some of us, anyway) to float. The ocean contains sodium chloride and other minerals necessary for survival. It makes sense that we would feel at home in, on, and near the water.

Researchers have proposed a “shore-based paradigm” for the development of Homo sapiens. Around two million years ago, our ancestors in east and south Africa found their way back to the water’s edge, according to this theory. There, they gathered coastal plants, seaweed, shellfish, and fish: foods rich in minerals like iodine, zinc, copper, selenium, and iron; vitamins A and D; and docosahexaenoic acid (DHA), a short-chain, energy-dense omega-3 fatty acid that today forms part of the structure of our brain, skin, and eyes. DHA is especially important for infant growth, and works at the contact points between neurons where learning and memory happens.

A coastal diet provided access to abundant sources of energy and nutrients that were limited in the interior, allowing hominid brains to grow and expand. With more time for solving problems, communicating, and relating with each other, hominids gained the capacity to conceive of stone tools, to hunt, to evolve.

The ocean evokes our love for all life. Biophilia, a term used by Erich Fromm and expanded by Edward O. Wilson, holds that our affiliation for nature is a large part of what makes us human. It explains our universal ability to sort, name, and remember different types of plants and animals. In modern times this talent has been redirected to corporate logos and brands, machines and games. But it re-emerges at the beach or on the water, when we put away our mobile devices to pick up shells, poke at crabs, and search the tideline for novelty and treasure.

For many people, water gives meaning to the landscape. Some people cannot stand to live away from the ocean, needing physical access to the sand, rocks, and surf, visual access to the blue horizon, and the psychological access that comes with just knowing it is there. Others feel lucky to spend a few days, weeks, or months vacationing seaside. Still others get just one glimpse, a dream fulfilled. Ocean love is wide and deep and diverse. 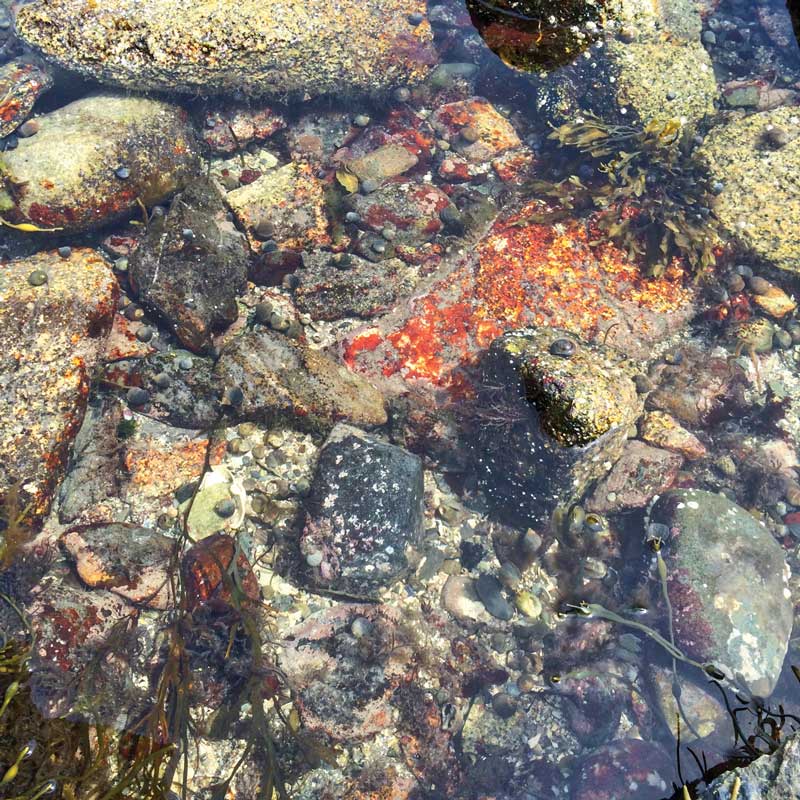 Salt water can help heal cuts, and marine algae have been used to treat burns and wounds. Photo by Catherine Schmitt

The ocean’s beauty is tinged with danger, vastness, and limitlessness, forcing us to question our perspective of the planet and our place in it. Filled with awe, we feel small and temporary—emotions that are not always easy, but that can also make us think less about ourselves and more about our community. In surveys and opinion polls, people value and enjoy shared blue spaces. Psychology experiments suggest that natural views and surroundings encourage social interaction, bring individuals closer to others, and make us more generous.

Contrast all of these findings with the fact that, on average, we spend all but one hour of the day inside, surrounded by plastic, concrete, steel, and glass. As a result, we are becoming more nearsighted, color blind, forgetful, stressed, sick, and selfish. The American Public Health Association, mental health experts, and governments (like the UK’s “Blue Gym” initiative to get people outside and on the water) recognize the value of the coast for community health and well-being. Yet green and blue spaces as commodities are out of reach for many. Might we be obligated to help everyone experience the ocean’s joy?

Edward O. Wilson reminds us to find re-enchantment and reconnection outside: “Mysterious and little known organisms live within walking distance of where you sit. Splendor awaits in minute proportions.”

Back in the tidal pool at the beach, periwinkles slowly graze across the rocks. Blades of young rockweed twist and bend. A tiny shrimplike thing darts beneath a rock. Sand grains tumble to and fro. As I look into this tiny world, sounds of traffic, sirens, and construction recede. Shoreline spruce shudder in the wind. Sand grains crunch underfoot. Birds pipe and cry. Swells rumble onto the shore, the lapping waves becoming background white noise.

Let us get lost in tide pools, go for a boat ride, take solace in the ocean. It will help us re-engage with the world, reconnected and renewed.

Catherine Schmitt is Communications Director for the Maine Sea Grant College Program at the University of Maine. She is the author of A Coastal Companion: A Year in the Gulf of Maine from Cape Cod to Canada.

The Nature Fix by Florence Williams

The Nature Principle by Richard Louv

A full listing of scientific research used in this article is available at seagrant.umaine.edu.