On the Working Waterfront: A Big Year of BIG BOATS 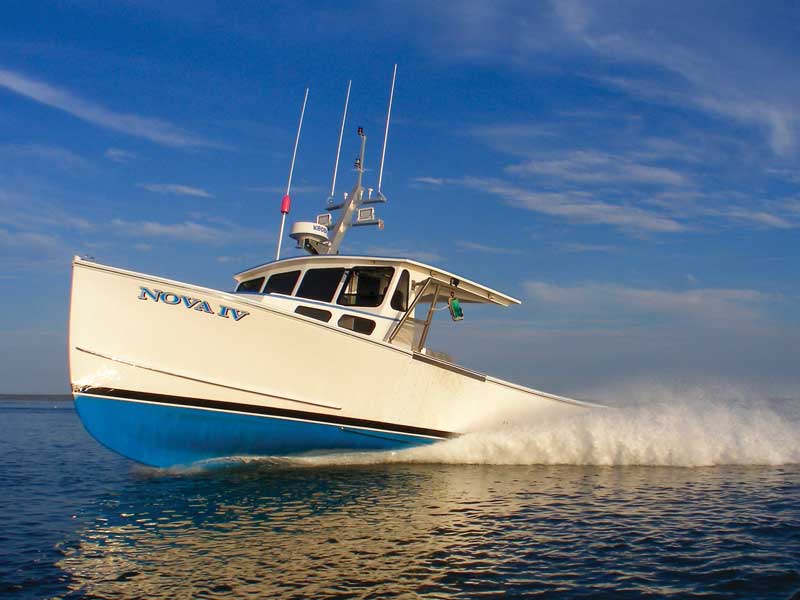 “I want to be able to go as far as I need to; I need to be able to fish the harder weather; I want the room to load on as many traps as I can when I shift my gear… and I want speed.”

That’s how one Maine lobsterman summed up his reasons for buying a new, bigger boat in 2017. And it could pretty much be the mantra for many others. While there are still plenty of working lobsterboats in the 30- to 40-foot range, 2017 saw the majority of hull builders and finish shops along the coast booked with orders for new projects 42 feet long and up.

These boats are built for shifting large loads of traps as their skippers chase the lobster population offshore. Most are equipped with multiple lobster tanks below decks (either circulating sea water or spray systems). Seaworthiness and stability are also concerns.

In addition, most lobstermen still demand speed, seeking cruise speeds in the high teens to 20-knot range, light or loaded. Surprisingly, most of these behemoths are achieving that sort of performance.

Take Wesmac Custom Boats in Surry, Maine: While there’s still plenty of interest in the 14'6"-wide Wesmac 42 and 46 models, their beamier (17'2") Super 46 has been popular of late with lobstermen. 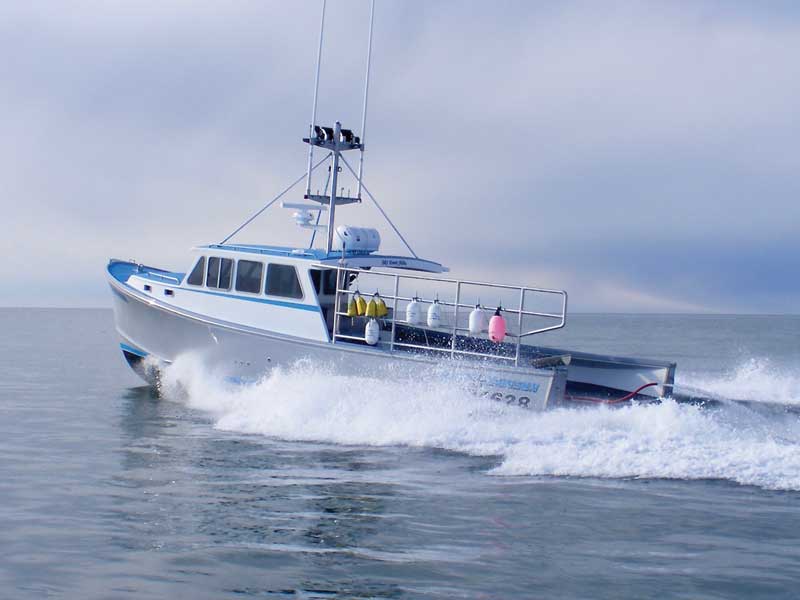 Corea, Maine, saw two Super 46s land in the harbor a few moorings away from each other in the early months of 2017. Dan Rodgers had Oceanville Boatworks of Stonington finish his new Bottom Line. Boricua Custom Boats in Gouldsboro launched Gavin & Dawson for Michael Hunt. Both boats are powered by 1000-hp C18 Caterpillars; differences in overall weight and trim give Bottom Line a two-knot edge in top speed over Gavin & Dawson (27 knots vs. 25 knots), with comparable cruises (22 knots for Bottom Line and 20 for Gavin & Dawson). 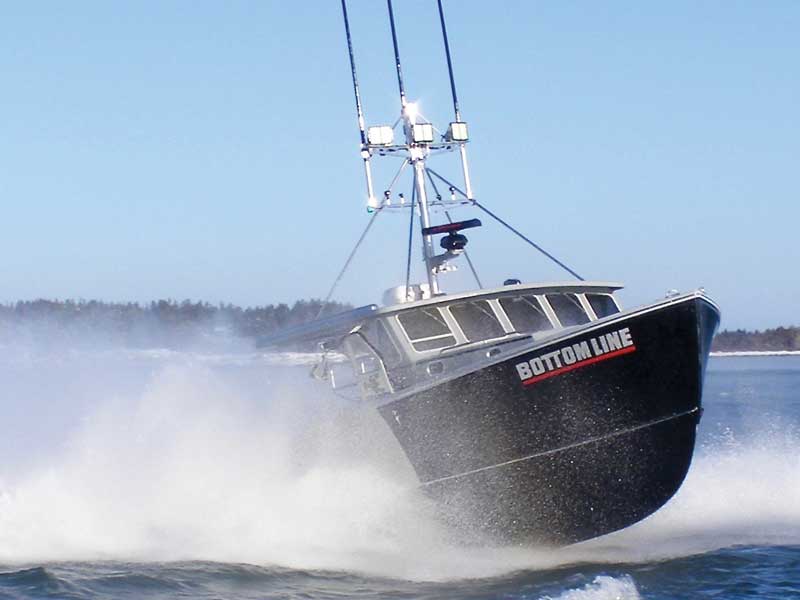 “We worked her three long days the first week after I brought her home and I was impressed,” said Rodgers of his Super 46. “I’ve had both skeg-style boats and built-downs, and to me, this Wesmac is in between the two. You get the performance of a skeg hull, but the steadiness and comfort of a built-down. Even side-to, she’d only roll down a quarter of what you’d expect—and that was it,” he continued.

While SW Boatworks in Lamoine continues to pop Calvin Beal 44s out of the mold for customers, their 42'x15' was just as popular this past year. SW’s Stewart Workman was inspired to come up with the 42 model in response to lobstermen who liked the Calvin Beal 38, but wanted to be able to carry another tier of traps.

Working with guidance from Calvin himself, Workman and crew began the process by laying up a 38-footer—and building a couple of steel cradles.

“When you cut a hull in two, it’s easy for things to go wrong,” said Workman. “We bolted the 38 hull right into the steel cradles so that when we cut her she wouldn’t lose her shape.”

That’s right: Workman cut the 38 in half, adding the extra four feet in the middle of the hull, paying heed to Calvin’s advice. “He told me, ‘Just make sure you keep that rabbet line nice and fair up through there. You’ll have to play with the keel a little and strike a new sheer line,’ he said, ‘but everything else should come right together.’”

The day came when the hull was ready for Calvin Beal’s final inspection before fairing. “He got down on his knees, squinted one eye … and said, ‘It looks pretty darn good to me—you got her,’” Workman said. 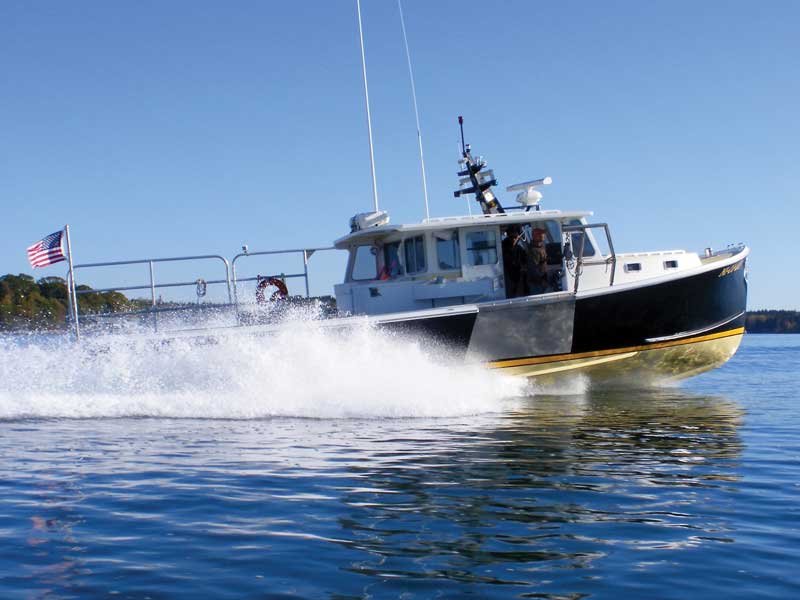 Ni-Co-Ben is a Calvin Beal 42, one of the most popular models from SW Boatworks in 2017.

One of the Calvin 42s to hit the water this year was finished by Mainely Boats in Cushing for local lobsterman Alan Poland. Powered by a 675-hp Scania, Alan’s Ni-Co-Ben topped out at 27 knots wide open with a 23.5 knot cruise at 2,000 rpm.

The most popular hull built by Calvin Beal’s brother Wayne, who owns Wayne Beal’s Boat Shop in Jonesport, has been the 17'10"-wide Wayne Beal 46. This year a new model was added to the stable. Lobsterman Ben Heanssler of Deer Isle is the owner of the first Wayne Beal 42—a lengthened version of the shop’s 40-foot model.

“I’ve had 120 four-foot traps on her and she doesn’t seem to mind it,” reported Ben after his first few days of working his new 42. 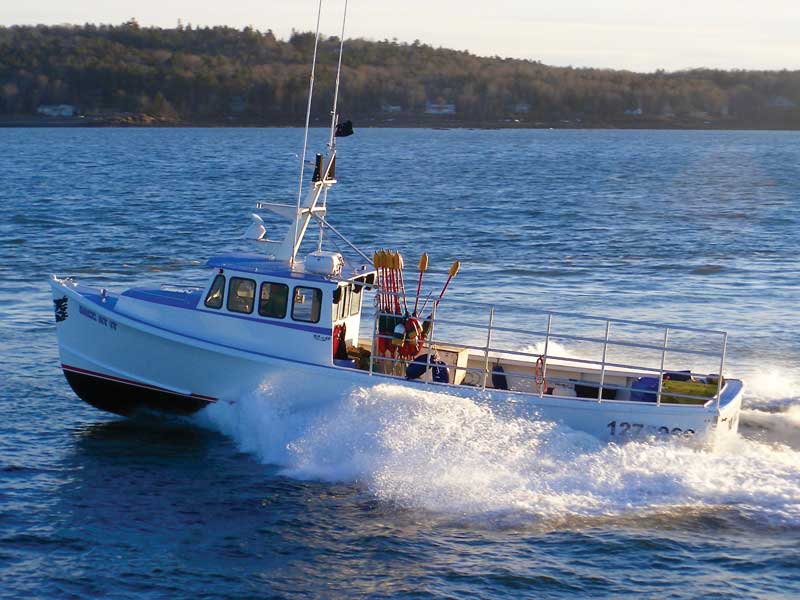 Cushing lobsterman Lucas Cocks’ Miss Attitude was one of the wide 42s launched by H&H this year, hitting a top speed of 23 knots with a 750-hp John Deere in her belly. Another 750 Deere powered the Osmond 46 Bacc At It, owned by Arthur Farnham of Vinalhaven and finished by H&H. Bacc At It hit 24 knots during sea trials with an 18-knot cruise.

Another multi-model mold is owned by Hutchinson Composites in Cushing, home of the Mussel Ridge line. While the shop started production on a brand new 48'x17'6" design this year, the foundations of their business are the Mussel Ridge 42 and the Mussel Ridge 46, born of the same mold (4 feet are added to the 42’s transom).

2017 also saw a third model built in that same mold: the Mussel Ridge 44.5. You’re not going to find it listed anywhere for sale, though, because Vinalhaven lobsterman Justin Osgood has the only one.

When Justin mentioned to hull builder Albert Hutchinson that he wanted to go longer than 42, but maybe not all the way to 46, Hutchinson’s reply was: “You tell us what you want and we’ll build it.” He settled on 44'6" as the magic number, and that was the LOA of the solid glass hull and molded top that Hutchinson Composites shipped to Clark Island Boat Works in neighboring St. George to be finished.

“The Mussel Ridges have a good reputation,” said Osgood. “Everyone I talked to said they sailed smooth and were steady sea boats. That, and the fact that Albert would build me just what I wanted, pretty much decided it for me.” 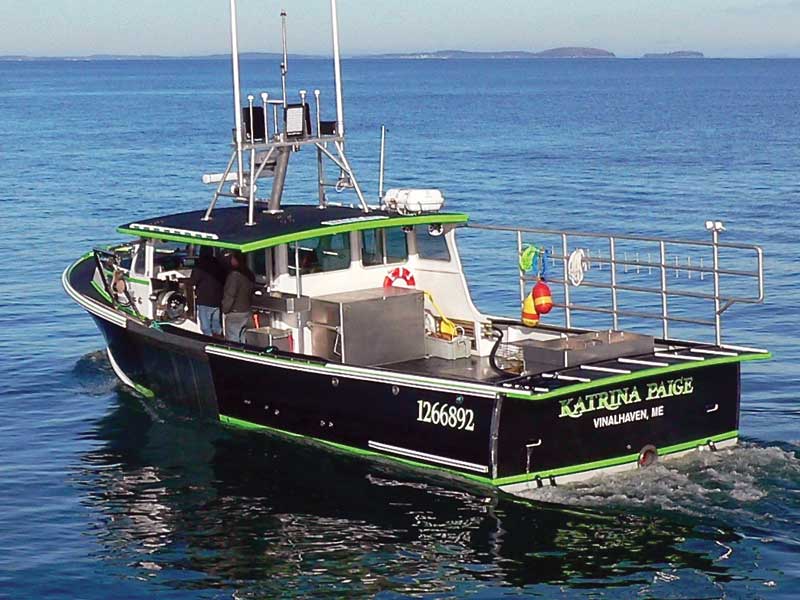 Justin’s Katrina Paige is powered by a 900-horse Scania, giving a wide-open speed of 26 knots and an 18.7-knot cruise.

Sargent’s Custom Boats in Steuben is the source for the Crowley Beal and South Shore model lines, the biggest mold being the Calvin Beal-designed South Shore 38, with a beam of 14'4". Once again, lobstermen looking for more deck room for stacking traps were the mothers of invention, and builder Joe Sargent has mastered the process of lengthening the big South Shore into a 42-footer.

One of this year’s South Shore 42s was finished by Eaton’s Boat Shop in Deer Isle for Stonington lobsterman Fred Hersom. Fred praised the work done by Jeff Eaton and his right-hand man Dwight Staples on the 42 foot Bella Grace. “The two of them get more done than a full crew … and they do a beautiful job,” he said.

Downeast in Machiasport, boatbuilder Frank Coffin has dedicated himself to keeping the legacy of the late Ernest Libby Jr. alive. Besides the original models designed by Ernest before his death in 2012—the Libby 34, 37, and 41—Frank’s East Side Boat Shop now offers the new Libby 47.

Frank and his crew (with welcome help from “the Libby boys,” Ernest’s sons Norman, Glenn, Ivan, and LeBaron) stretched, widened, raised, and deepened a standard 41'x15'6" hull until it was 47' long and 18'7" wide.

Said Norman Libby, the oldest of the brothers, “When Frank first talked about making a 47-footer from a 41 hull, I didn’t know what to think. But I’ll tell you right now, he’s got a good eye.” 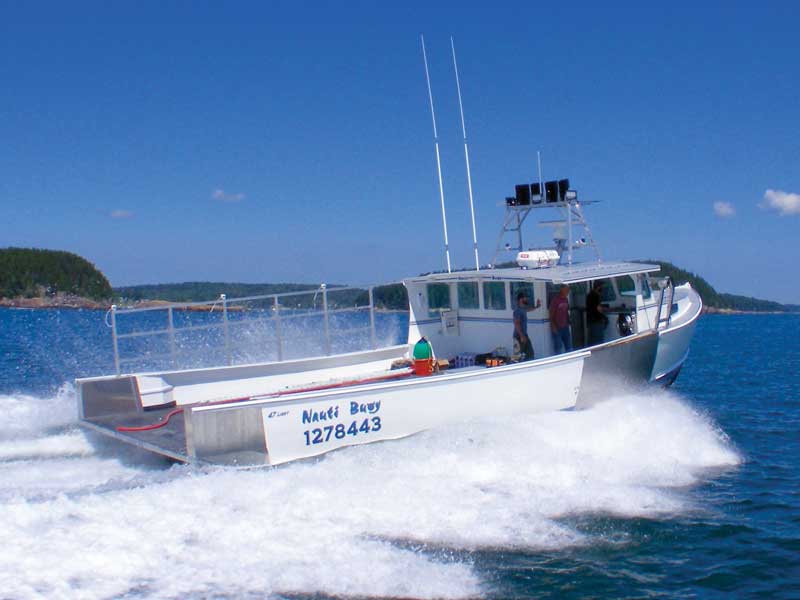 Josh Polk’s Nauti-Buoy is the first Libby 47 to float.

Another new model to hit the water in a commercial fishing version this year was the Flower 43, built by Flower’s Boatworks in Walpole. John’s Marine Care in New Harbor finished the 43'x16' Red Lady for local fisherman Donald Wotton, setting her up for everything from long days of inshore lobstering to multi-day trips offshore chasing tuna.

“She’s super heavy from the bilges up,” said finisher John Brackett. “We packed a lot into her.”

Red Lady went to work as soon as she floated, racking up 580 engine hours in her first three months of duty this past summer. Her 750-hp John Deere provided her with a 23-knot top end and a 16-knot cruise at 1,700 rpm.

Lobster landings for 2017 were down from last year’s record-breaking numbers as summer turned to fall.

What will this mean for the big boat trend? Time will tell. Right now, many hull builders and finish shops are looking at orders two to three years out—more big boats with big power.

That represents a lot of lobsters.

Can You Supersize That for Me? 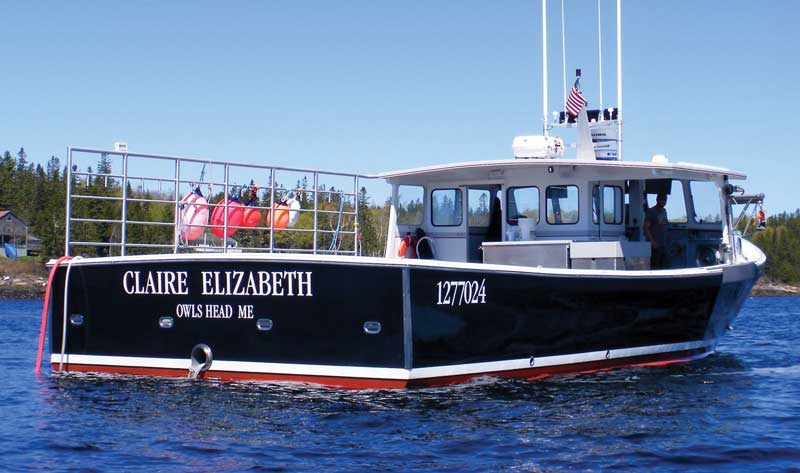 At 49'11" LOA and 19'2" across her middle, Micah Philbrook’s Claire Elizabeth offers plenty of work-deck and below-deck carrying capacity.

“I wanted a boat with as much deck space as I could get,” said Micah Philbrook, who lobsters out of Owls Head. “But it also needed to be as economical as possible to run.”

He made the drive east to Cutler to visit with Norbert Lemieux and his son Nick, who run Little River Boat Shop.  “Whatever I ended up getting for a hull, I knew it was going to be finished by Little River,” said Micah. “My previous two boats were built by them.”

In fact, it was Nick Lemieux’s own 49' Phantom—a lengthened Osmond 47—that inspired Micah to buy a supersized Osmond for himself.

Little River started with a 47'4"x19'2" hull and top from H&H Marine in Steuben with the sheer raised 6" all the way around. The H&H crew stepped the layers of fiberglass at the transom, making a gradual taper forward into a standard hull thickness.

Little River cut out a faux transom that was there simply to hold the hull’s shape during transport, and added another 2'7", employing molds they’d taken off the stern of Nick’s Phantom. 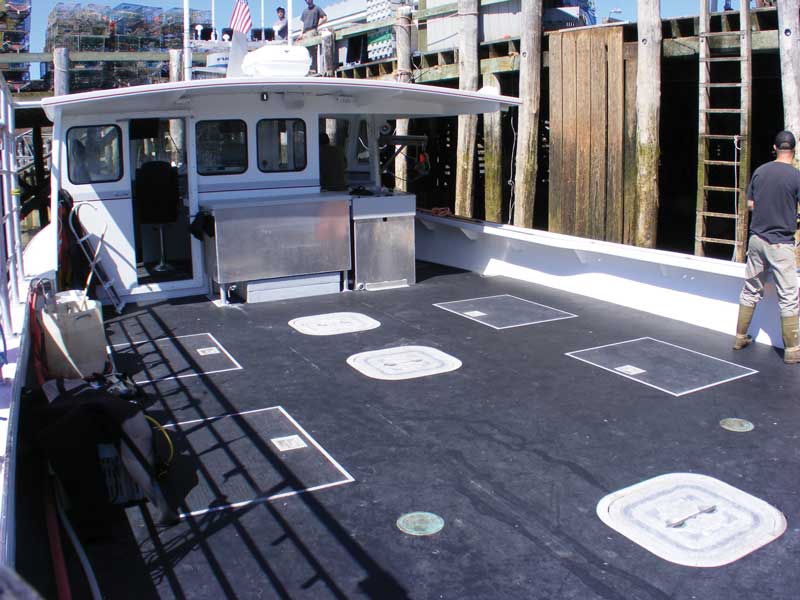 The result was the massive work deck Micah wanted. But how about that economical performance? His choice of power was a D16 Volvo Penta (750 hp @ 1,900 rpm).  “While we were building this boat, I figured if I could cruise at 14 knots, I’d be happy,” he said.