Can’t stop reading Since I have been receiving Maine Boats, Homes & Harbors I have found it necessary to discipline myself to read only one page per day. That way I pretty much always have MBH&H to read every day until the following issue arrives. However, with the February/March 2014 issue, it has been virtually impossible for me to stop reading each boat article without completing it. This means that I probably will complete this edition much before the next one arrives. So be advised that I will be expecting the next issue much sooner than normal. I don’t want to be without a MBH&H to read every day! Thanks for a great magazine!
Ken Kemper
Marysville, PA 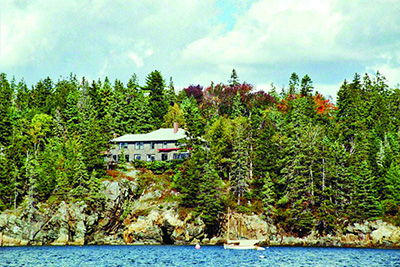 Photo courtesy of Leila Murphy
Special ties to land and family It was such fun to open the latest issue of MBH&H magazine (April/May 2014) and to see the article “Influenced by Nature” about the early land conservation effort on Mount Desert Island. I was interested to learn of Charles W. Eliot and his son’s early exploration and sailing adventures that ultimately brought them to Northeast Harbor. I have been fortunate to spend time on the island since childhood. It’s the place where I picked my first blueberries, where my mother and grandfather taught me to sail, where I first scrambled over rocks on my way up Sargent Mountain, and where I learned to swim in the bracing ocean water. So many of our family gatherings happened at a house referred to as the Coffeepot, which was built by Charles W. Eliot in 1917 (paid for in part with the proceeds of a silver coffeepot) and given to Charles Eliot’s wife after his early death. It was then passed to one of his daughters (my grandfather’s mother) and then on to us. The photograph shows the Coffeepot; C.W. Eliot’s house, known as “The Ancestral,” was located to the right of the Coffeepot. His house did not stay in the family, and sadly, was torn down about six years ago. I am grateful to my illustrious relations for the adventurous spirit that brought them to the area all those years ago. I feel the same calling to that place and appreciate the history that ties me there. There is a certain magic on the island... and who doesn’t need a little magic from time to time?
Leila Murphy
Portsmouth, NH
No more rubber-neckin' Greetings from North Haven. You have done a great service to the State of Maine by publishing the article "Bath Iron Works: Zumwalt, The largest and most advanced Navy destroyer ever built" in the February/March 2014 issue. To have a photo of the destroyer Zumwalt on your cover was perfect. For some time, I've been craning my neck while crossing the Bath bridge, just to catch a glimpse of this impressive beast. Twice I've nearly lost control of my car, just to catch that glimpse. Since reading this article, and seeing this cover photo, I can focus on driving and not rubber-neckin' on the bridge. As for the cup of bacon fat in the Molasses Cookies recipe in the same issue… I guess we'll all have our time in heaven!
David Hopkins
North Haven, ME
Thanks for being inclusive I am writing to say thanks for including "Rock Rest: Pre-Civil Rights Vacation Destination" in the April/May issue of MBH&H. It was a community that I knew little about before reading that wonderful article. Being African American, it is rare to see our culture highlighted in magazines that focus on seafaring life. I also especially liked the article about Dyon entitled "Love Affair with a Boat." Anyone who owns a sailboat and who is not involved in such a "love affair" should be ashamed.
Robert Freeman
Jamaica Plain, Massachusetts
Proper gear for women I read Peter Bass’s column "Fishing Fashionistas," about the concept of designing foul weather gear for women, in the April/May 2014 edition with great interest. This is a real, but solvable, personal safety and personal comfort issue. In the early 1980s, I was involved as an attorney and consultant in the integration of women into the fire service—specifically the New York City Fire Department. Women candidates initially had great difficulty at the fire academy with hose and tool evolutions and did particularly poorly in ladder and climbing work. Male instructors felt this was proof that females could not, and should not, become fire fighters. However, when the fire department was legally forced to provide the women with boots, gloves, and turnout gear that was made and sized for the female body, they performed well. Most surprising to everyone was their proficiency in ladder work. Properly fitted boots and bunker pants allowed them to climb as well as, if not better than, their male classmates. The boating industry or some smart entrepreneur would do well to develop and market a line of protective gear specifically sized for women, including PFDs and immersion suits—styling is optional!
Neil Rossman, FV Bright Stars
Swampscott/Marblehead, MA
For the record The article about carrageenan (named after a town in Ireland) in the previous issue referred incorrectly to the company that owns the Rockland plant. FMC stands for Food Machinery Corp. All materials become the sole property of Maine Boats, Homes & Harbors, Inc. Letters may be edited for style, length, and clarity.

A Tale of Two Boatyards