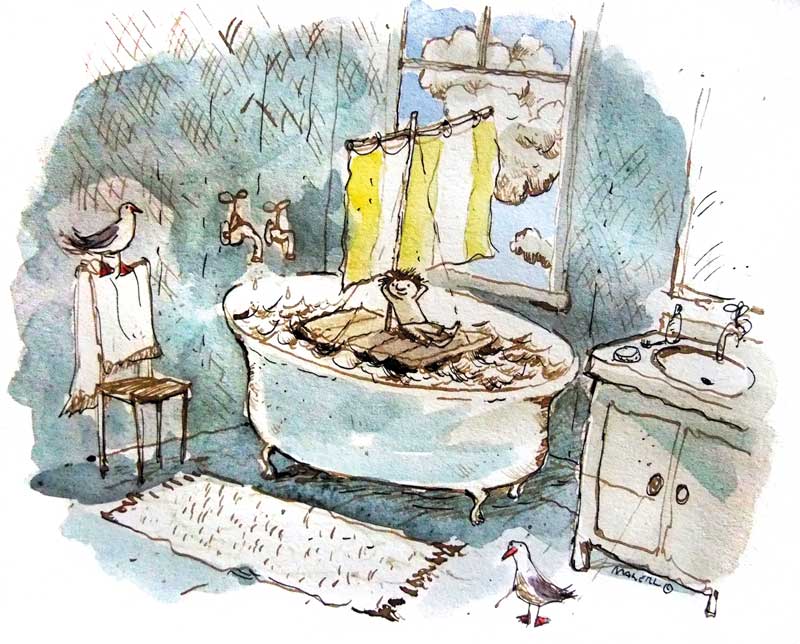 The boat of summer is on the ways, the one we’ve been building all winter, if only in our mind’s eye. It’s loaded, crewed, and ready to ply the waves—just a release, then a short gentle coast, and we’re in the channel and heading out of the harbor.

It’s the boat of drifting, and languor and doldrums; of island picnics and bay crossings and transiting the reaches. Waterskiing? Okay. It is the boat that you lift on the roof of the car or the one you trailer to the landing and ease in until the muffler gargles. Or it could be the boat you launch with the Travelift. It is the boat of small jibs and mainsails, of races and day sails. Or the boat of diesel fumes and paddles. It is the boat of casting into the big eddy where the “one that got away” last year is surely waiting for a rematch. It is the boat of anticipation and yearning, lo these many months. And you can feel it glide down the ways with the same motion and whoosh of summer itself as it comes to its all-too-brief mooring in June.

E. B. White wrote passionately of this pull boatward. Returning, at the age of 70, to a childhood pastime, he wrote, “Whence comes this compulsion to hoist a sail, actually or in a dream?” Though his first experience, at age four, had ended in catastrophe, it instilled an irresistible love-fear relationship. “The sea became my unspoken challenge: the wind, the tide, the fog, the ledge, the bell, the gull that cried help, the never-ending threat and bluff of weather…it was as though I had seized hold of a high-tension wire and could not let go.” Sailing in Blue Hill Bay—and writing about sailing in local waters—became a new compulsion.

Mark Twain’s Huck Finn defines boat time versus shore time. “You feel mighty free and easy and comfortable on a raft,” he says. “Two or three days and nights went by; I reckon I might say they swum by, they slid along so quiet and smooth and lovely.” Feel the current of summer there?

Swum! Perhaps you’re a swimmer, not a boater at all? Summer is also about being a new swimmer, wading or plunging in bay or stream or lake, each swim a fresh acquaintance with the first time you ever took to the water.

Philip Booth wrote a poem to his daughter as she learned the first lessons of swimming:

As you float now, where I held you

and let go, remember when fear

cramps your heart what I told you:

lie gently and wide to the light-year

stars, lie back, and the sea will  hold you.

Oh, that moment of simultaneous terror and exhilaration, when we insisted we be “let go!” and then floated free of the adult hands. Suddenly, we discovered our own buoyancy, the support that was simply there all along, and we paddled toward open water.

It works for writing, too. The words and sentences are there; the ideas, experiences, and inspiration will float you and your boat, telling your story, setting forth upon the waves of imagination, letting your sails luff a little; drift.

Or, haul the sheets in tight and dip the rail to the water. Dig your paddle deep through white water. Even doldrums have deep, creative currents moving beneath the surface. Every sentence has a hull shape, keel, and jib size all its own. Keep a hand on the tiller and bring us to the mooring. Lie back, and your words will hold you—actually, or in a dream—and thoughts from the frozen season will buoy you up. Ultimately, we are the vessel, plying the fleet waters of summer in anticipatory prose.

Todd R. Nelson is a former Maine school principal and writer. He lives in Penobscot and won’t own a boat that he can’t lift onto the roof of his car.