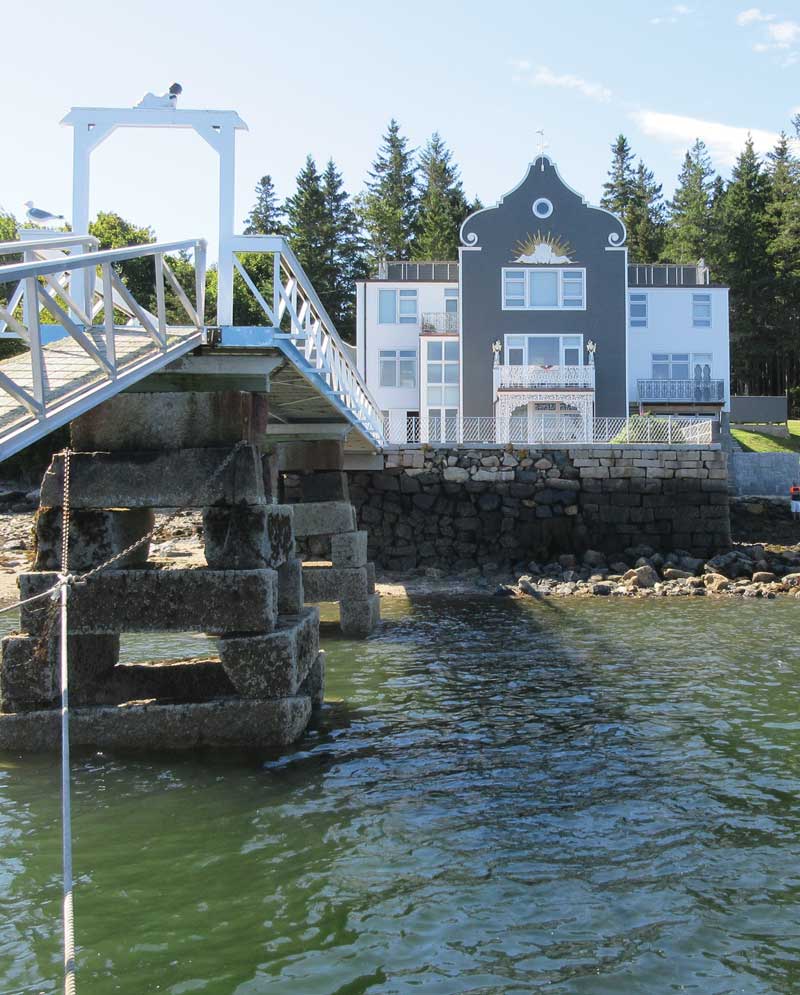 The design of this house in Manset was inspired by the circa 1708 Penha building in Curacao in the Dutch West Indies. Completed in 1941, it has remained in the original owner’s family. Image courtesy Albert Putnam Associates The Manset shore of Southwest Harbor includes the usual picturesque jumble of docks, boathouses, and cottages in a similar style, except for one unique home. Perched at the water’s edge, it is adorned with ship’s figureheads and decorative carvings, and its narrow façade reaches to a scrolled Dutch colonial gable, redolent of more exotic places than rugged Maine.

No mere novelty, this compelling house upends safe ideas of taste and what a house on the Maine coast “should” be like.

The house’s origins were humble. It was built in the 19th century as a plain boathouse and store for the Ocean House, a long-vanished summer hotel, and later used as storage for the Manset town dock. In 1940, it caught the eye of Carroll Tyson, a noted artist and bon vivant from proper Philadelphia, who had long summered nearby in Northeast Harbor. Mrs. Tyson had been Helen Roebling, the granddaughter of John Augustus Roebling, a wire rope manufacturer and engineer, whose career culminated in the building of the Brooklyn Bridge.

The Tyson’s daughter Helen had married Louis C. Madeira IV, the associate curator of European decorative art at the Philadelphia Museum of Art in 1938. The Tysons wished to give the young couple a summer house of their own on Mt. Desert Island, and they chose the boathouse at water’s edge over more conventional options. For this collaboration between father and daughter, there was no doubt as to the choice of architect. It would be Edmund Beaman Gilchrist, also a Philadelphian, and long Carroll Tyson’s architectural partner in crime, having designed the family’s house in Philadelphia’s Chestnut Hill enclave, as well as extensive additions to their Northeast Harbor cottage, and a folly camp on nearby Long Pond.

Edmund Gilchrist was also a Philadelphian, the son of composer and teacher William Wallace Gilchrist. After studying at the Drexel Institute and two years at the University of Pennsylvania, he entered the office of Horace Trumbauer, an architect best known as the designer of palaces for the very rich. He remained there for a year, moving on to the office of Wilson Eyre, considered one of the finest domestic architects in the country at the time, and the leading proponent of the picturesque English Arts & Crafts style that then dominated the Philadelphia region. This training stood Gilchrist in good stead, and he was soon himself one of the city’s leading architects, noted for crisp, finely edited designs. Like many of the era, he was versed in many styles, as can be seen from just a partial list of his buildings in Maine, including a tiny Romanesque chapel of boulders at Petit Manan, the Tuscan design of the original Abbe Museum at Bar Harbor, or the Lutyen- esque Islesford Museum, in addition to a number of farmhouse vernacular summer cottages along the coast.

(above) The architect’s drawing for the street side of the house called for a tall central gable and two one-story structures (one is a garage) that frame a courtyard entrance. Behind the one-story structures, two wings face the water on the other side. (Below) The first structure on the site was this simple boathouse. Images courtesy Edmund Beaman Gilchrist Collection, The Architectural Archives, University of Pennsylvania. 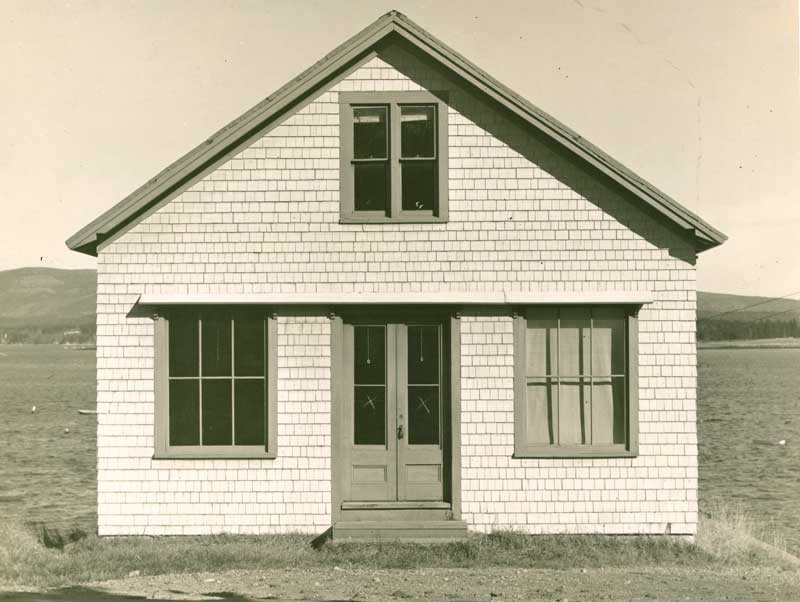 The trio of Carroll Tyson, his daughter, Helen, and Gilchrist began the design process in 1940. Helen Madeira suggested the unusual design inspiration, the Penha store, an 18th century building in Curacao in the Dutch West Indies. Her father, a collector of nautical artifacts, threw himself into the project with gusto, acquiring ship’s figureheads, European carvings at Freeman’s Auctions in Philadelphia, 19th century ironwork from buildings in Lancaster, Pennsylvania, and carved architectural fragments from houses in Bangor, Maine, all to adorn the exterior of this most unusual project. It fell to Gilchrist to control these riches, and he rose to the task. Construction began in the fall of 1940, and by the next summer, the Madeiras spent their first ten days in the house.

Despite its wildly eclectic first impression, Gilchrist was in full control when he designed this house, and it offers many surprises beneath its bold gables. On the street side, he exercised good manners with two projecting one-story wings to form an entrance courtyard, which, seen from a distance on the lane, appear modestly as vernacular forms in the landscape. But here in this court we realize that something more is going on with the playful geometry of this façade. The central gable section is pierced by a defiantly modernist three-story window, punctuated by a flanking door with lacy transom. For all their affection for the picturesque, both the Tysons and Madeiras were collectors of important modern art (much now in the Philadelphia Museum), and were open to the new. The house is bisected by two perpendicular wings in the international style, with a glassed stair tower to the lower level in their apex on the water side. The Madeiras and Gilchrist developed a color scheme of deep gray on the traditional flush board sections, and white on the modernist wings, heightening the drama of “Manset House’s” design to present day.

A native of Blue Hill, antiques dealer Brad Emerson has always been fascinated with the built environment. He writes an occasional architecture blog called the “Down East Dilettante.”