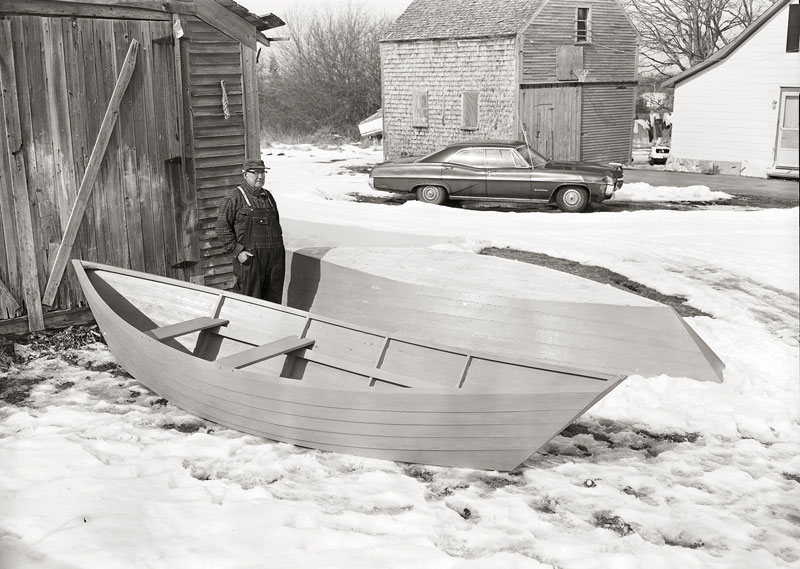 Twenty years ago, we ran a series in the magazine, called Working Watercraft that featured the photos and commentary from long-time marine reporter Red Boutilier. Most of these images and stories were from the 1970s. Although much in the photos reflected that era—cars, hairdos and clothes—they all had a timeless, almost mythic, feel.

One spring column featured boatbuilder Harold Benner, one of the last professional dory builders on the coast. Benner is pictured standing outside his shop with two recently completed dories parked next to him in the snow. The photo is an essential image of spring in Maine—the builder stands outside without a coat and the dories rest on rotting spring snow banks. Although the shot is black and white, I can imagine early shoots of green grass by the shop door.

This is the annual rebirth along the coast. New boats come out of the shop; the sun melts the snow and ice of winter; the promise of new adventures fills the air.

All winter long, boatbuilders work within the shelter of warm, or at least warmish, shops. Often in these shops, there is not enough room to get a good view of the whole project. It is not until the first, longer days of spring that these creations become fully visible for all to see. Shop doors open, and the winter’s work emerges.

There are other tell-tale signs of spring—seed catalogues on the kitchen table, smelts and alewives running up rivers, daffodils in bloom, and white water canoe racers. For me, however, the most powerful portent of the new season is a new boat perched, outside a shop door as the snow, and winter, melt away.