A lovely wherry for rowing and sailing 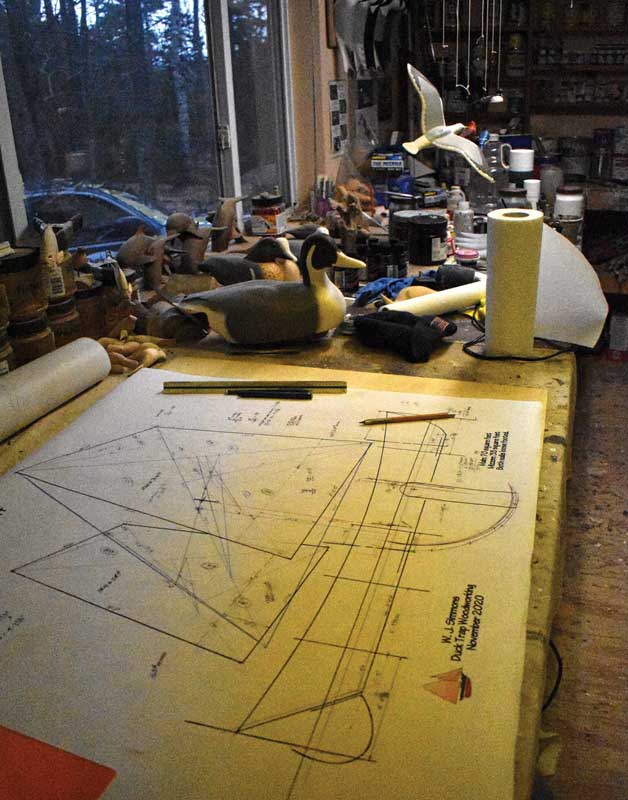 A plan for one of Walt Simmons’s trap skiffs sits on a workbench in the boatbuilder’s workshop next to some of his decoys. In addition to building boats, and writing books about them, Simmons is an accomplished bird decoy carver. Photo by Art Paine

Wherry as a boat term dates at least to the 14th century. It generally is used for small and large rowing boats, suited to carry both passengers and light freight. The construction and shape—lapstrake boats with narrow plank keels, double ended at the waterline, and a high flaring transom—was found up into Canada and down into New Jersey, but only in  Maine’s Penobscot Bay were these vessels called wherries. Elsewhere they might be reach boats or skiffs.

This brings us to Walt Simmons and Duck Trap Woodworking based in Lincolnville, Maine, which has become an epicenter of the American versions of wherries. A recent visit to Simmons’s shop was sparked by my friend, John, a serious boat nut who now lives in Las Vegas. We met in the late 1980s, when I was captaining a classic yacht that he had previously owned and restored. Since then, we have collaborated on a few boatbuilding schemes. Now he’s 83. I thought he’d finally tossed over his anchor, but when his physician advised him to exercise, he decided to acquire a small boat, for rowing and sailing on Nevada’s Lake Mead.

Almost 40 years ago John had read an article about Simmons and his Newfoundland Trap Skiff—it was love at first sight. He bought one of the first sets of plans, but never built the boat. Then last year he commissioned Simmons to build one, and I went down to look it over.

Simmons and his wife, Karen, have family roots in Manset and Southwest Harbor. Boatbuilder Jarvis Newman was a cousin, and Simmons’s great, great-grandfather Captain Tom Newman worked as a coastal pilot in ports ranging between the Hudson River and Maine. 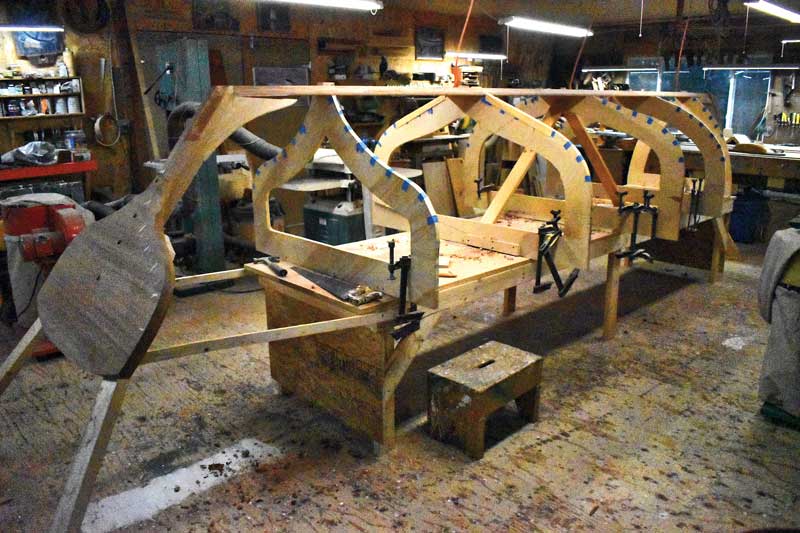 The station molds and transom for the Newfoundland Trap Skiff are set up and ready for planking.

Simmons grew up in New York state. Then Maine beckoned, and he and Karen landed in Lincolnville on 14 acres that included seven dilapidated cottages and a fixer-upper house. The property lay on a hillside above the Ducktrap River, a place of infamy for fish and fowl. Up until the early 1940s when Atlantic salmon were plentiful in Penobscot Bay, salmon weirs were a common sight in the area, and several Lincolnville builders specialized in the wherries used to haul fish to shore from the weirs’ pound nets.

While Simmons was sprucing up his property, he became acquainted with others who shared his interest in wooden boats, oarsmanship, and maritime history. He rowed in the evenings for enjoyment, and found mentors like illustrator Sam Manning and boatbuilder Merrill Young.

“I worked for a contractor up in Camden as long as I could stand it. But after I got done with him I calmed down with a cup of coffee with friend Sam Manning, who lived nearby on Chestnut Street. He drove me down to Rockland to Lie-Nielsen’s boat shop. The conversation turned into a job interview. He asked me if I had a wide chisel in my tool kit. Then he reached into his breast pocket, pulled out a pencil and snapped the point off of it. ‘Sharpen it,’ he said. So I worked under Merrill Young, who was Lie-Nielsen’s master builder at the time, and eventually the two of us split off and built a 32-footer for a doctor who summered on Matinicus.”

During his off time, Simmons delved into the maritime past of his home village. There had been several wherry builders in Lincolnville. Their boats featured a flat “plank” keel that was ideal for operating off the beach; these wherries rowed easily—double-ended on the waterline with high bows and sterns to handle the shore break coming and going. Their hull shape was stable to start with, and only got steadier the higher the salmon were piled.

When the runs of Atlantic salmon disappeared, so did the wherry builders.  But Simmons realized that there were plenty of local and newly located Mainers who wanted to row. So he struck out on his own and added boat design and construction to enterprises that already included cottage rental, carpentry, and decoy carving—today he sells many decoys to government agencies across the country for use in repopulating wild bird colonies. 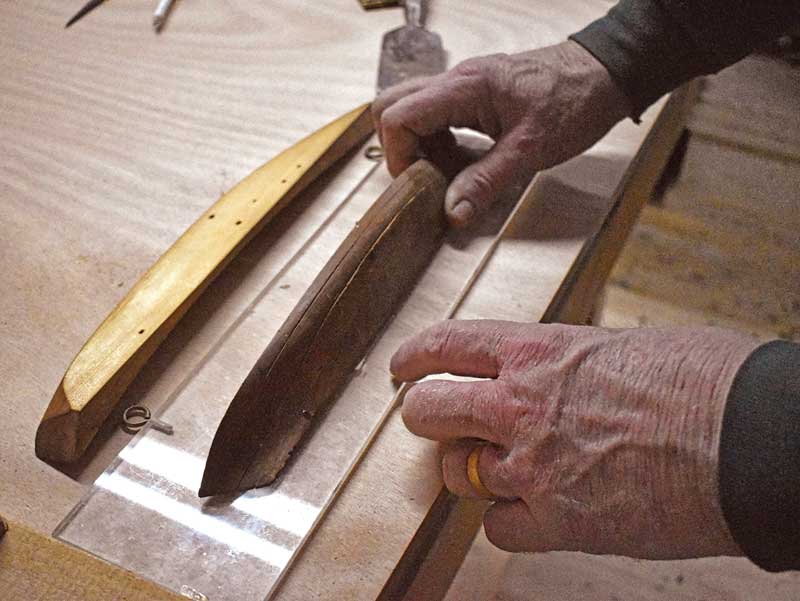 This tiny “lift” boat model that an antique picker found in Nova Scotia helped inspire Simmons’s designs. He shows how the model comes apart in sections to allow tracing around the waterlines.

One day an antiques dealer from Lincolnville Beach came to the shop. He’d sent a picker to Nova Scotia who’d brought back, among other handicrafts, a box full of half-models. In order to assign value to them, he wanted a boatman/historian to take a look. All but one of the models were normal fishing types with keels, and carvel planks fitted into a rabbet. But the smallest one grabbed Simmons’s eye because it was a wherry, with the unique plank keel. In payment for his evaluation he wanted only this model, so remarkably similar to his hometown versions. It was labeled faintly in pencil, “3/4 inch scale.” He calculated the full-sized boat would’ve been about 19 feet long.

Like the others, this model was the “lift” type, which came apart to allow tracing around the waterlines. Simmons made a double-sized half-model of his own to better evaluate the shaping, then lofted and faired it full-size. Soon a customer appeared in search of a custom wherry, capable of sailing beyond the sight of land. Simmons built that first one, and it exhibited both beauty and surprisingly good performance. Over 50 years he has designed and marketed four or five variations on the Newfoundland Trap Skiff theme. Because of the straight, flat keels, the overall length of these boats can be varied easily by altering the mould spacing. I asked Simmons how many Trap Skiff plans he’s sold. “Oh...  hundreds probably,” he replied. The Newfoundland Trap Skiff he’s building for my friend will be 18 feet 23⁄8 inches overall—it is designed to fit inside the customer’s garage.

Ben Fuller, former curator at Penobscot Marine Museum and Mystic Seaport, credits Simmons as being a pioneer in providing easy-to-build plans for small boats. “I don’t understand why Walt isn’t better known in the small wooden boat community,” said Fuller. “He has done really good work. He really knows his stuff.” In addition, noted Fuller, Simmons has done a nice job of adapting the traditional style of working wherries to the modern recreational market. 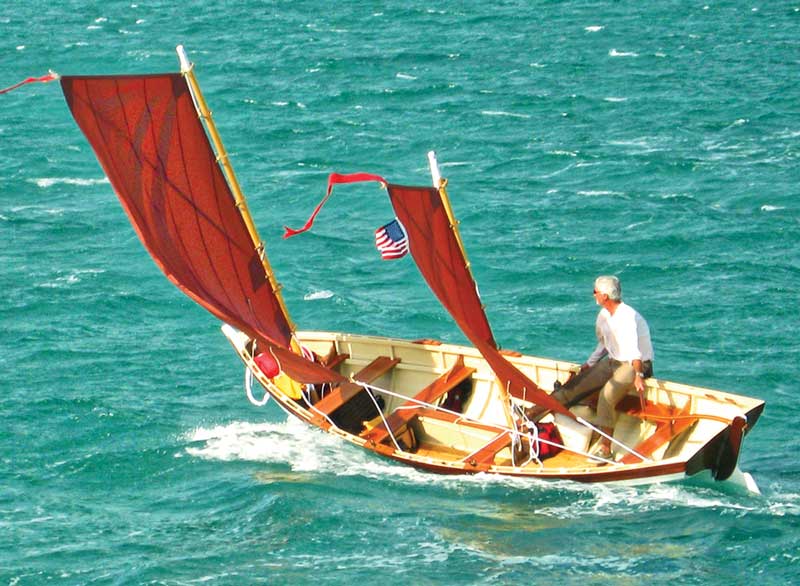 A Newfoundland Trap Skiff that Simmons built for a previous customer steps out in a breeze. Photo courtesy Walt Simmons

Among the several wherry types that Simmons builds, the Newfoundland Trap Skiff is the largest, and probably the best sailer. The spars fit easily on the thwarts, and the ketch sprit-rig is low slung and easy to step. The deep, vertical centerboard can be fully retracted using a rope pennant. The rudder slides upward as the boat hits the beach. Performance under sail improves as the wind increases, because one feature of these boats is a lot of reserve stability. It’s as if a big, burdensome hull were sitting upon a fairly sharp, easy-going canoe body. A shapely wineglass stern provides a bit of added bearing in a blow. In most wherries the stern might be a touch higher even than the markedly high bow. As a result, the sheer of these boats is dramatically swept. The low waist amidships facilitates rowing, as the oars need not be dipped as far.

I like to think that I can improve most boats that come my way, but when my friend John and I conspired to find something to improve on this design, the best we could do was to suggest a wider stern seat to accommodate the wider stern of the owner.

I am happy to be writing about a small boat. The Newfoundland Trap Skiff is the most expensive of the several variants offered at Duck Trap Woodworking. There are 10 planks per side (this one has nine), and among the models, this is the most difficult to plank owing to her rather extreme tuck. With its mahogany thwarts, transom, top framing, and sheer-strake, the end product has a touch of yacht. By the way, the smallest of the Duck Trap wherries is a rocking baby cradle, originally designed for Simmons’s granddaughter—those plans sell like hot cakes.

If you are not in the market for a Newfie Skiff or any of the smaller and simpler Duck Trap Wherries, then you could consider buying a set of plans, assuming you’re handy with tools. Or take my advice and buy any of the 20 books Simmons has written—they are full to the gunnels with sage advice on boats, tools, lofting, planking, woodwork, finishing, and maritime lore.