Reproduction vintage fishing lures bring back the past 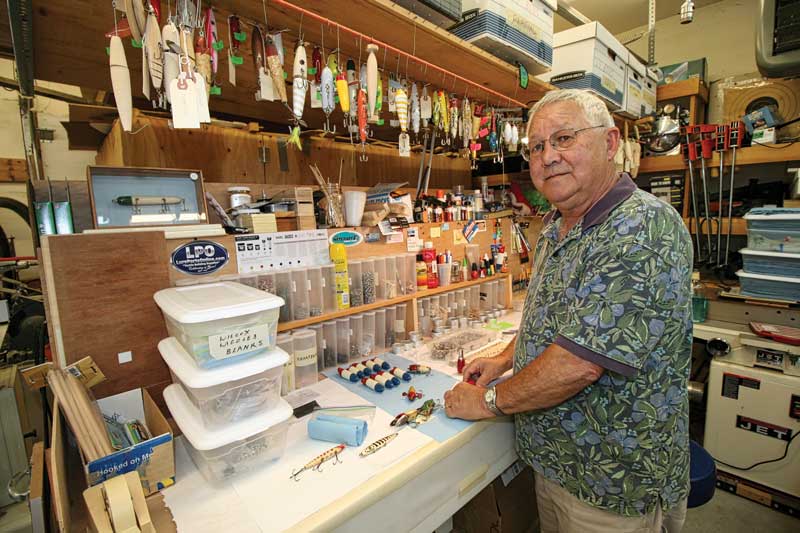 Old wooden fishing lures have a special “allure,” but they can be hard to find, especially in usable condition. For the past 10 years, Christopher Augustus has been filling the void, with handcrafted reproductions of lures dating back to the first half of the 20th century.

They have names like the Dowagiac Expert, the McGinty, the Crazy Crawler, and the Zig-Wag. Each has specific traits, like rotary heads, rear propellers, swivel fins, slope noses, articulated bodies, or barber pole paint patterns. Augustus has reproduced models for about two dozen heirloom lures, crafting thousands of them since he started a decade ago. He sells his work through eight Maine co-ops, and at about 20 craft shows each summer. 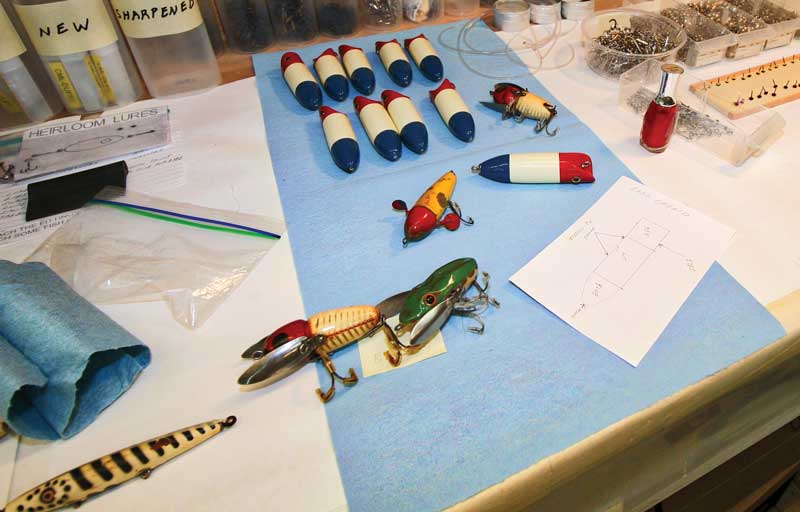 A batch of Bass Orenos and vintage Crazy Crawlers.

During a visit to his workshop, at his home in Seal Cove, Augustus picked up a model called the Dillinger, which has a slim profile and a prison-stripe paint job. Created in the 1930s in Bartow, Florida, by the Eger Bait Company, its original name was the Florida Special.

“But the locals down there called it the Dillinger, because it had stripes like a convict’s uniform and it killed the fish,” said Augustus. “The creator was a smart businessman, so he changed the name to Dillinger. It’s a very famous lure.”

The years from 1900 to 1950 were “the golden age for wood lures in the United States,” he said. A fellow named James Heddon is credited with patenting the first wooden fish lure in 1902, in Dowagiac, Michigan. After the 1950s, plastics dominated the market.

Augustus crafts batches of about a hundred lures at a time. No one makes patterns for what he’s doing. So to create a model, he takes measurements from an heirloom lure and uses them to carve a reproduction. From the reproduction, he creates a template to ensure subsequent lures come out exactly the same when he shapes them on a lathe. If he doesn’t have an heirloom to measure, he extrapolates measurements from photographs or drawings.

Using softwoods like basswood or western cedar, he turns wood pegs—about 1 inch by 1 inch by 6 inches—on a mini lathe to achieve the desired shape. Each piece is coated with six to eight layers of oil-based enamel paint that’s sealed with clear finish. Component parts include claw hooks and fittings such as tiny glass eyes.

“This was all learned by the seat of my pants,” he said. “There are some books that will show you how to make a lure, but how to make reproductions of the antique lures was another story all together.”

Earlier in life, Augustus made a living designing and creating prostheses. He always enjoyed woodworking and has built sea kayaks and iceboats in his free time. One day, at a garage sale, he picked up a shoebox full of beat-up old lures.

“I went online, trying to identify these things,” he recalled. “That’s when I became aware that there was a universe of collectors for this stuff. People collect all kinds of things, but these old fish lures—they’re not making them anymore. The companies, for the most part, have gone out of business or switched to plastic.”

He thought it would be fun to try to make some.

“My earliest lures were pretty crude,” he said. “I didn’t even make the bodies. I bought them. But they didn’t fit the exact sizes I needed to make the reproductions. So after a year or so of fooling around with that, I got the wood lathe and started making them.” 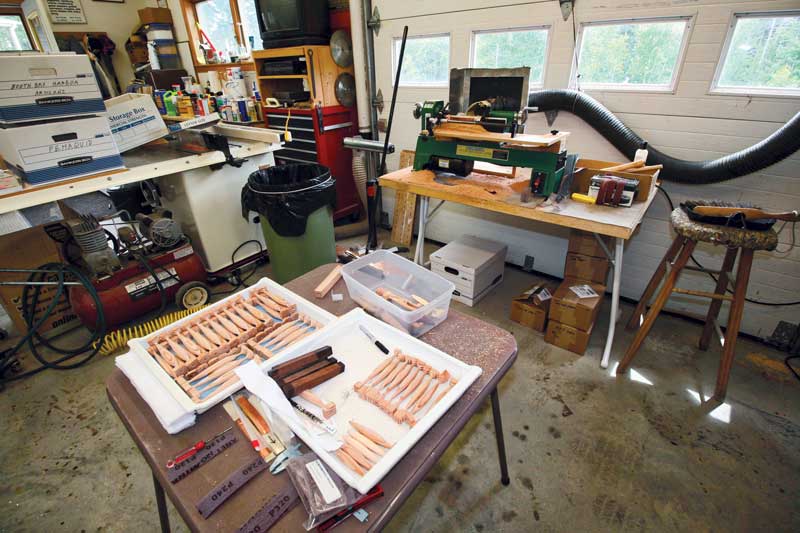 This batch of turned pegs will become Dillingers, a lure design created in the 1930s by the Eger Bait Company and originally named the Florida Special.

Antique lure lore is plentiful online. Augustus does much of his research there, buying interesting vintage lures on eBay. He’s also accumulated a library of books and magazines on the topic. Numerous companies made wooden lures before the plastic lure was invented, he said.

“James Heddon was considered the godfather of wood fish lures,” he said. “There were a lot of companies in the Great Lakes area—that was a hotbed of lure development. If you fast-forward to the mid-1940s and probably by 1950 for sure, every major company had switched to plastic. Since then you’re talking about collectors and the lures they were out to collect.”

When Augustus looks for the next lure to reproduce, what catches his attention most is the story behind it. Take the wooden Bass Oreno; a cylindrical specimen with a tapered tail, it’s not unique in itself. The South Bend Bait Company, in South Bend, Indiana, invented the Bass Oreno in 1915 and made the lure in volume in different color combinations. The model was discontinued in 1964. But people still keep them in their tackle boxes.

“On eBay, you wouldn’t pay much more than $30 for an original,” Augustus said. “But during the Great Depression, the company made a limited-edition, red, white, and blue Bass Oreno and gave it away for free if you bought a U.S. savings bond. Today, an original red, white, and blue Bass Oreno is worth about $1,500. And it’s only because of that story. It had nothing to do with the fish.”

Each of Augustus’s lures is sold in a little wooden box and accompanied by a write-up of its history and a copy of its patent. Augustus keeps a customer record of every sale.

“So I can tell you that 80 percent of my lures are bought by women, for the men in their lives,” he said. “The old guys come by and want to talk about Uncle Al’s tackle box. They hardly ever buy anything. But the women come in and say, ‘I’ve got a husband, a father, a son, a son-in-law, an uncle. I never know what to get them for any of the events in our lives. But I know they like to go fishing.’ And that’s who usually buys them. I never thought that would be the case, when I started. People usually say, ‘You ought to go to a sportsman’s show.’ But I don’t think I would do well there because they’re populated by guys who don’t buy anything. So I do arts and crafts shows.”

Lures are designed to target different types of fish. But they’re also eye candy to fishermen.

“It’s always good to remember that fish lures are designed to catch fishermen,” Augustus said. “Most fishermen have a tackle box with god knows how many lures. They’ll point to two or three of them that they use 99 percent of the time.”