A puffin in flight over Eastern Egg Rock.
Eastern Egg Rock (1) sits just east of a border that splits Muscongus Bay between Lincoln and Knox counties and just south of another that further divides it between the Knox towns of Friendship and St. George. These lines are critical to the lobster catchers who work these waters, but I’ll venture that the multitudinous birds that fish off the rock don’t give a quack, a cackle, or a coo. With significant help from National Audubon Society humans, Eastern Egg has become a sort of communal summer resort for eider ducks, laughing gulls, black guillemots, storm-petrels, three types of tern—common, Arctic, and roseate—and, of course, Atlantic puffins. 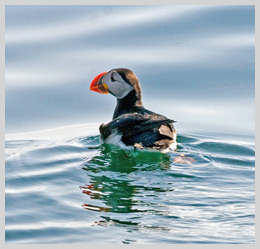 Puffins have made a Maine coast comeback
on Eastern Egg Rock.
The puffins are cute beyond words, and the rebirth of this particular colony is amazing. In the mid-1970s, biologists hand-fed successive generations of infant birds that had been carefully transported from Newfoundland. Seasons later, they erected decoys to reinforce the puffins’ instinct to breed where they’d fledged. Every year scientists and volunteers live in a shack on the island dubbed the Eastern Egg Hilton to carefully monitor the goings-on, which is how we know that last summer burrows were set up by more than 90 pair of puffins, including the rock’s patriarch, “Y54,” who returned for his 26th summer, during which he’s sired almost as many offspring. The tern and storm-petrel colonies are also thriving, encouraged by decoys, “gull and vegetation control,” and tape recordings of courtship sounds. You can learn much more about all this at www.projectpuffin.org —there’s even a puffin cam—and by a visit to the Puffin Center on Main Street in Rockland (207-596-5566). But the real thrill is to visit the rock, which is possible, and even more thrilling, in a craft as small as Gizmo. The rules are simple: you can travel as close to the rock as you dare (the chart seems accurate, and the birds don’t mind), but you can’t go ashore. In fact, you’ll wonder how the bird people manage to, given a persistent surge even on an the otherwise flat day. But the resulting splash and spume contribute to the good fishing conditions that make the birds so joyfully noisy. Coastal cruisers can easily follow a viewing of Eastern Egg with a gawk at what may be Maine’s two most artfully reimagined island homesteads, which complement each other across the passage (2) between Benner and Allen islands. Think Wyeth. Another option is a visit to Black Island (3), where you’ll find paths, berries, and beaches, now guaranteed public forever thanks to the same Maine Coast Heritage Trust, Chewonki & Maine Island Trail Association partnership that also protects Hungry Island (4) farther up the Bay. One birdy day I’m looking forward to a wander around Hog Island (5), home of the Todd Audubon Sanctuary. 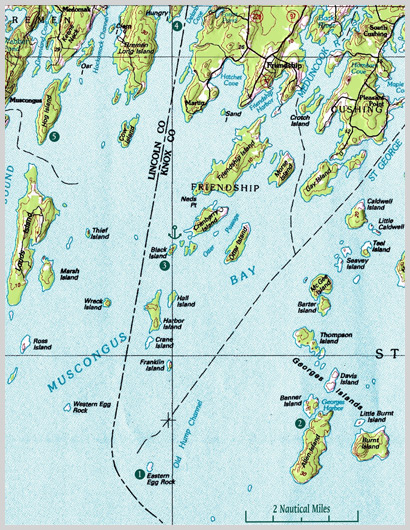 Click on the above image to download a PDF chartlet. (1mb)
Chart Details: 1 --- Eastern Egg Rock bird sanctuary, looking is permitted, but going ashore is not (see www.projectpuffin.org). 2 --- Passage between "what may be Maine's two most artfully reimagined island homesteads." 3 --- Black Island, forever public under the auspices of Maine Coast Heritage Trust, Chewonki Foundation, and Maine Island Trail. 4 --- Hungry Island, also public under the same partnership as Black. 5 --- Hog Island, home of the Todd Audubon Sanctuary.
Roll over numbers to view thumbnails
Credits: All images and map enhancements by Ben Ellison, based on 1:100,000 topo quadrangle “Bath.” Chart not meant for navigation. For reference only. E-mail Ben (gizmo@benetech.net) about restaurants, parks, and the like that he can visit aboard the M/V Gizmo.