Illustration by Caroline Magerl
It’s easy to forget, in these days of pricy imported fuel, that not all that long ago a good part of Maine was energy self sufficient – burning locally grown wood in locally built stoves. And while some homeowners opted for imports from distant places like Vermont or Taunton, Massachusetts, there were also many homegrown heaters and ranges: the “Atlantic” from Portland Stove Foundry, the ubiquitous “Clarion” from Wood and Bishop of Bangor, the “Kineo” from Noyes and Nutter (also of Bangor). Or for that matter, the stove might have been built in Waterville, Houlton, Mapleton, Hampden, Augusta, or Brunswick. It seemed that almost anywhere you went in Maine you might find a stove foundry. Part household appliance, part furniture, the cast iron range and parlor heater was a study in practical and elegant construction. Some have likened a cast iron wood stove to a steam locomotive: levers and dampers that slide, lids that lift, shakers that shake, heat chambers and flues, water jackets, and dandy thermometers. 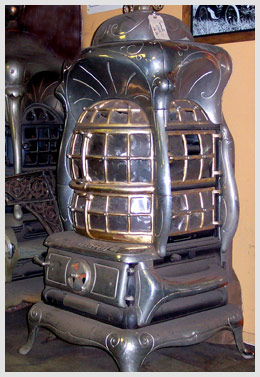 One was expected to know one’s woods (and their relative heating values) and to be an active participant in the heating and cooking process. Like any proper locomotive of the same period, a wood stove would have ornamentation ranging from humble to elaborate. Nickel plated trim was common and the cast iron would be adorned by foundry men with bas relief scroll work in Gothic, Greek, Italianate, Rococo, or Egyptian motifs. There might be cast-in lion’s heads, a cod fish, a quote from Milton, or even torch-wielding cherubs traipsing through a vineyard accompanied by a hound. There could be iron urns that humidified, stacks that recalled temple columns, warming ovens and swinging elevated trivets. The entire top of the kitchen range was a cooking surface of differing temperatures. Some had ovens that could accommodate a 35-pound Thanksgiving turkey — and all the trimmings. Also reflecting the era, the devices bore confident names: “Queen Atlantic,” “Star Kineo,” “Home Comfort,” “Glenwood Oak,” “Monitor,” “Hot Blast,” and “Climax.” Clearly these were appliances to be reckoned with. Alas, times change. Wood heat went to central heating. Gas and electric ranges arrived in kitchens. No stove black, firewood, or ashes to contend with. Just turn it on and there you go. Many of the old stoves were broken up. But others simply went into retirement in the barn or shed to await better times. These arrived in the early 1970s when a fuel crisis and a back-to-the-land movement rekindled an interest in the practical business of wood heating. By this time, most of the old foundries were gone, but the remaining old stoves could be dusted off, and with the addition of some new grates and perhaps a few parts, they would be ready to go. If, that is, you could find the stoves -- and the parts. Enter Bea and Joe Bryant. In downtown Thorndike is the home of Bryant Stove and Music Inc. There, Bea and Joe specialize in restored antique stoves — kitchen and parlor, Franklin, wood/gas combination, and gas. Also, they will restore customer’s individual stoves, supply hard-to-get parts and offer nickel plating. A visit to the showroom is akin to a stop at an antique car museum. Polished black iron (and occasional enamel) is accented by glistening nickel. Cook stoves in a wide array of sizes jostle with parlor heaters of all sorts. (The Fixers - Wood Stoves cont.) 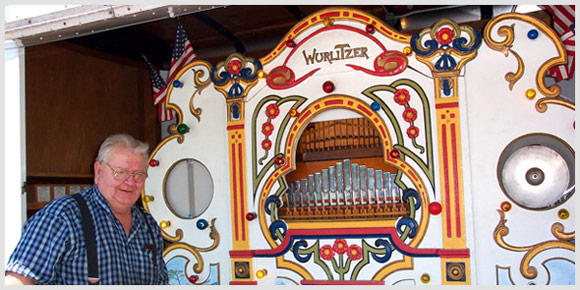 photo by Greg Rossel
Bea Bryant started her wood stove restoration business in the late 1960s. “I just liked them” she said. “And Joe had the shop that could do the work.” Cast iron stoves can last more than a lifetime and a 90-year-old cook stove left in place with a kerosene burner can still be just like new. But, continuous exposure to hardwood fires can burn and warp metal, stove cement can fall out, and abuse or simply moving the heavy devices can damage parts. Stoves have to be re-built to at least the same quality as the original. Joe outlined the process: ”Someone will bring in a stove. We have two men who go over the stove and determine the price to restore it. First, we cut every bolt, disassemble the stove and put it into a shopping cart and we take it to the Wheelabrator machine that cleans the pieces by slinging metal shot at it. One pass through the machine usually does it.” They also have a sandblaster for larger pieces Tracking down parts has been more problematic. Noted Bea, “It was hard for us when Portland (Stove Foundry) went out in the mid 1980s. One by one, the foundries in the east had to close.” As each foundry closed there was always the chance the delicately elegant carved wooden patterns might be lost forever. When Noyes and Nutter shuttered their doors, their “Kineo” patterns were sold to Wood and Bishop. When they ended their run in 1939, the Portland foundry acquired both sets. Finally, in 1982, the Bryants purchased all those just as Portland was closing. Said Joe, “The original patterns are best but in a pinch, you can use an old part for casting but you have to deal with a small amount of shrinkage.” Today, some iron parts are cast at a small foundry in Maine, while others are fabricated in the midwest. Nickel plating is also done out-of-state. Currently, the Bryant’s have most of the critical parts for a Maine-built stove and many parts can be adapted to fit stoves from away. Right now, they are probably the only ones in the state stocking new parts. What can’t be found new, can likely can found out back. Said Bea, “We buy (non-rebuildable) stoves on purpose just for parts. We have quite a junkyard.” After the parts have been cleaned, welded if necessary, and new ones obtained, the stove is reassembled with the same care as when it was new. It’s then carefully painted, the nickel trim added, and the finished product is brought out to the showroom. “Business has gotten better every year,” observed Joe. “People come from all over the world – England, Alaska, Germany. Several of our stoves have gone to Disney World and other museums.”