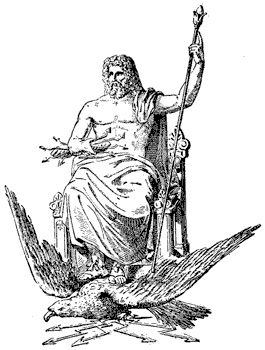 Photo courtesy Mara L. Pratt, Myths of Old Greece
(New York: Educational Publishing Company, 1896)
When I was nine, my mother gave me a book entitled Myths and Enchanted Tales. First published in 1960 by Rand McNally, the book was full of cheerfully colored drawings of Greek gods, goddesses, and mortals (all of whom seem suspiciously young when I leaf through the book now) coping with their fates. Many of those destinies were tied to the water. Icarus fell into the sea blazing, and Daedalus mourned. Jason set forth in the Argo in search of the Golden Fleece. Ulysses, of course, spent an inordinate amount of time at sea, thwarted by Neptune and aided by Ino, a sea nymph. Perhaps it is because oceans cover the majority of the earth that civilizations, ancient and modern, invest their imaginations in the sea. Or perhaps it’s because those oceans rise and fall and lavish harm on communities with impunity that stories must be told to grapple with the fact of humanity’s helplessness. Floods are a popular motif in many ancient legends. The waters may come from the sky or arise from the sea but whatever the source, the result is a cleansing of the earth and a lot of repentance on the part of the few human survivors. In the Babylonian Epic of Gilgamesh, the hero Gilgamesh is searching for immortality. He meets a very old man, Utnapishtim, who says he is immortal. Gilgamesh wants to know how that came to be. Utnapishtim tells him that after the council of the gods decided to destroy all human beings with a flood, one of the gods, Ea, told him about the plan. Ea taught Utnapishtim how to build a ship in which to store himself, his wife and children, animals, food and, importantly, beer. It rained for seven days and then Utnapishtim’s boat settled on a mountain. Later the benevolent goddess Ishtar rewarded Utnapishtim for surviving by giving him and his wife immortality. The Greeks told the story of Zeus, yet again angry, sending a flood to destroy mankind. Prometheus, still chained to a rock for bringing fire to humanity, tells his son Deucalion to build a stout wooden chest. The young man and his wife climb in and float for nine days and nights as the world is covered with water. Finally, they land on the mountain Parnassus. Deucalion, who is wise in the ways of angry gods, promptly makes sacrifices to Zeus. Mollifed, Zeus tells the couple to throw stones behind them as they walk. Where the stones fall, new men and women spring up from the earth. A myth from Indonesia tells the tale of a giant sea snake, Naga-Padoha. On the back of the placid snake rests the earth. The snake, however, grows tired of its burden. One day it shakes its back and the earth falls into the sea. This upsets the god Batara-Guru, whose daughter happens to live on the earth. So Batara-Guru sends a large mountain down into the sea upon which the girl and others climb. She then becomes the mother of a new human race. Batara-Guru decides that the back of a snake is no place for the earth so he settles it instead upon the snake’s head. In the Americas, the Inca believed that the great god Viracocha used a great flood to destroy a population of angry giants. During the flood, two people hid in sealed caves. After the waters receded they came forth and quickly repopulated the earth. The Mayans said it was the god Huracan (from which we get our word “hurricane”) who caused a great flood after mankind somehow angered the gods. After he sent the flood to cover the world, Huracan spoke the word “earth” repeatedly until lands rose up again from the sea. The source of all these stories is, of course, impossible to determine with any certainty. A popular theory, which was covered in National Geographic several years ago, is that the Mediterranean Sea was the source of a great flood about 7,000 years ago. As the ice ages ended and glaciers melted, the Mediterranean grew larger, pushing up into Turkey. At that time, the Black Sea had existed as an isolated freshwater lake for many thousands of years. The Mediterranean continued to rise until it finally burst through the Bosporus Strait (at the time, dry land) like the stream from a giant fire hose. According to archeologists, the Black Sea rose about six inches a day for decades, flooding a vast area around its former shores very rapidly. That flood was translated into the legends of many disparate peoples. What mythic tales can we spin for ourselves about such catastrophic events as Hurricane Katrina or an entire summer month of rain in order to bring order to the seemingly arbitrary havoc wreaked by nature? We could claim that it was the fault of the government, which should have planned better for calamity. We could find some sort of bitter solace in the facts of science, which link warmer world temperature to changes in local climates as well as stronger oceanic storms. We could always say that it’s God’s will. Or perhaps we should just say that the sea snake shrugged.