Slow Down and Save 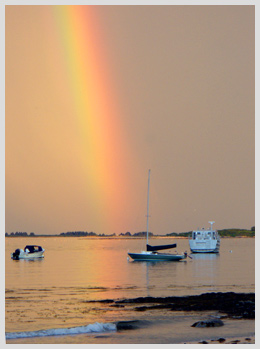 Michael Porter's mooring.
Photo by Leah Arsenault
Sometimes it seems as though there is no longer any restraint or reason in the world. No, despite what you may think, I'm not talking about world affairs, or the current political scene, but about the parade of boats that speeds past my mooring every summer day. Except for the sailboats (not too many) there is nothing moving at less than 15 knots. Even in this era of high fuel prices there seems to be no alternative to keeping the throttle right “in the corner" and the ocean, at least the couple of miles of it between us and Whaleboat Island, is constantly roiled by wakes. In the words of the old-timers, these folks are "bailing dollar bills overboard." You could say this is the fault of the boat manufacturers, and in truth it is difficult to buy a boat that is efficient at relatively low speeds today, but even if you went to Sea-Ray or Sunseeker they would simply say that there is no market for slow boats. Even many builders of lobsteryachts have redesigned their boats with "modern" underbodies, which is code for underbodies that give up the good qualities of the older lobster boat in favor of higher top speeds and correspondingly poorer low-speed performance. Now, there is nothing wrong with going fast in the absolute, and in situations where you simply have to be somewhere quickly. People who live on islands always seem to be in a hurry on the mainland too, spurred on by the boat schedule, and I have been known to drive . . . well, "briskly" (is there a statute of limitations for speeding?) on Route 1. Even for some kinds of boat (crew boats, for example, or water taxis) there is a significant economic incentive to hurry, but those are not the boats that roar down Casco Bay for the most part. It can't really be a love of speed for its own sake, because in most boats you don't really go all that fast, and most of the boats speeding past my mooring are not going any great distance. If asked, their owners would probably say they are simply out to enjoy a day on the water. So why the rush, other than to enrich the oil companies? It's not as though these are all performance boats, deep-vee "Cigarette" boats, or high-tech sport-fishermen; instead they are typically small to medium-sized "cruisers" with hull-forms intended to make them go fast. They invariably carry too much weight, however, to go fast gracefully, so they are greatly over-powered in order to get the speed back by brute force. This means they drag huge wakes behind them. One might be tempted to go along behind them with a bucket to scoop up the bills (not ones any more but fives and tens) they are dumping overboard. Even the lobster-catchers, who one might think would know better, are not immune. It is not at all uncommon to see a boat finish setting a stringer, jam the throttle forward for the maybe half-mile run to the next buoy, and then throw the boat in reverse to pick up the buoy and start hauling. The result is not only that the boat is forever slatting and rolling in its own wake, making the work harder, but also that the fuel bill is at least half-again as big as it needs to be. I can't help remembering my old friend and sometime employer Ray, who never used his reverse gear except coming into the mooring. I can see him now, going along at a reasonable speed (maybe eight knots?), slowing as we neared the buoy and steering a little wide of it to prevent it from disappearing under the bow, taking the boat out of gear at just the right moment and giving the wheel a little twitch to starboard to bring the buoy right alongside just as the boat stopped. The boat never bounced around (unless the day was choppy, of course) and he made a high-liner's living while hauling fewer traps. There is wisdom in that.
Marine designer and consultant Michael Porter lives and works on Chebeague Island. He has spent his life in and around boats, even during periods when he was not involved with them professionally. He has run a boatshop for some 25 years, building boats (mostly to his own designs) and doing repair work as well. Click here to find out more about Michael.