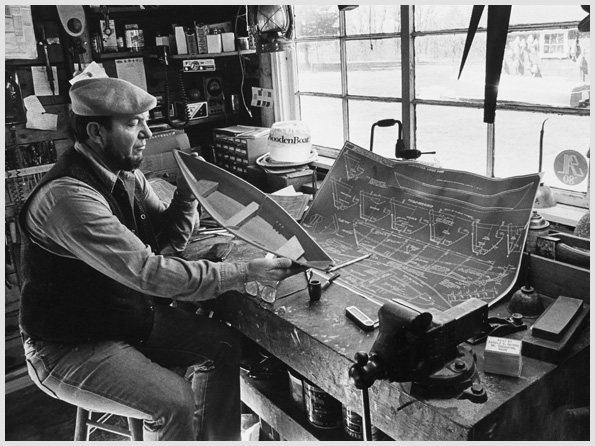 Harold "Dynamite" Payson, Boatbuilder, Author
Photo courtesy of the Payson Family
Among the men who ply the various trades, I have observed that the ones who work with boats—designers, builders, and users—are usually happier than most others, and of these, the very happiest in my opinion are boatbuilders who use edged tools and work in wood. Such work makes demands on, and seems therefore to satisfy, the whole man—hand, eye, ear, brain, and heart. — Dynamite Payson I knew Harold H. "Dynamite" Payson long before I met him. Like thousands of other aspiring amateur boatbuilders, I had answered one of his classified advertisements in a boating magazine. He suggested that I, too, could build a boat in my own backyard. For a couple of dollars he sent me in the mail a packet of information about the plans he offered for various boats, as well as instructions for building and using them. He called his operation Downeast Dories, and everything he wrote about it was spiced with a compelling aura of boatiness that promised the realization of my dreams. Dynamite's personality oozed from the envelope. I knew that I must meet this man. About 40 years ago I did, and in short order we became fast friends. Think of that. A Maine coast lobsterman-boatbuilder who wouldn't receive his high-school diploma until he was 65 years old and a college-educated writer-editor from away who was nearly 15 years the junior. Together we transferred our skills to the other. He helped me build boats and boat models, and I have had plenty of those to show for it. I helped him become a writer, and he wrote a shelf full of books that made him famous—among them Boatbuilding the Easy Way, Boat Modeling with Dynamite Payson, How to Build the Gloucester Light Dory, The Dory Model Book and several others. Together over the years we worked in his shop, went sailing, fished for smelts, taught boatbuilding classes, played with make-and-break engines, dowsed for water wells, and spent hours around the kitchen table discussing all manner of things.

Books by author, Harold "Dynamite" Payson, Boatbuilder.
Dynamite Payson, like many Mainers, was a curious blend of contradictions. A traditionalist, he nevertheless built most of his boats with plywood and had no compunctions about gluing them with epoxy and skinning them with fiberglass. Cautious when it came to style, he built prototypes of some of Phil Bolger's most avant-garde designs, including a sailing skiff that was steered from the bow and a schooner that could be folded in half for easy transport. A flinty conservative in the Yankee sense, he was liberal in politics. An introvert, he was a consummate conversationalist. A stay-at-homer, he had incredible curiosity about the outside world. A perfectionist, he was artful in compromise. Dynamite Payson passed away on March 23, 2011. Everyone who knew him—his family, his friends, his readers, the thousands of people around the world he encouraged to build their own boats—all of us mourn his passing. — Peter H. Spectre