Renovation adds a modern touch to a historic home 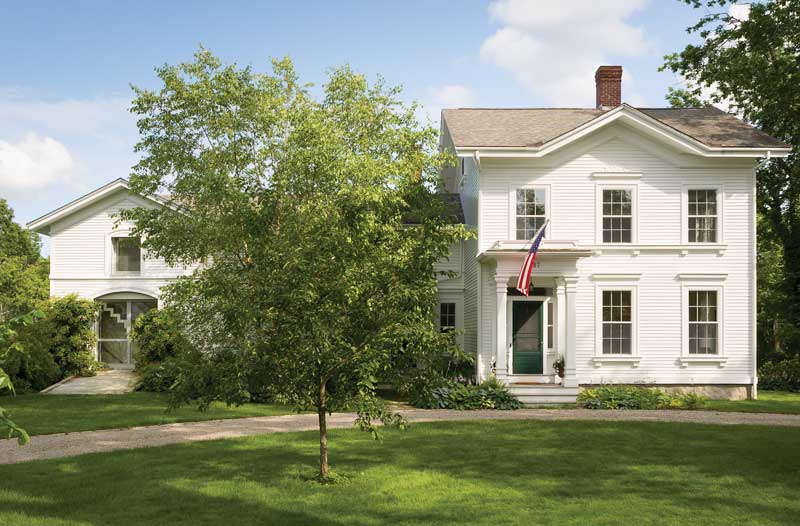 During the day the exterior of Castine’s historic Moses Perkins House and attached barn looks much as it did in 1849 when the house was built.

The coast of Maine is dotted with villages featuring elegant old homes. Many would-be homeowners love these houses for their charm and history, but a perpetual dilemma is how to adapt these old-fashioned spaces for 21st century life.

That was the task faced by Elliott + Elliott Architecture of Blue Hill with a historic structure in Castine known as the Moses Perkins House.

Castine can trace its roots back to the early 17th century, when French traders built a fort on the highlands overlooking the mouth of the Bagaduce River and Penobscot Bay. The fort was part of France’s attempt to control “Acadia,” the region between the Kennebec and St. Croix Rivers. Dutch forces destroyed the fort, named Pentagoet by the French, in 1676, then more or less disappeared from the area which became part of the British Empire in 1713.

By the 1760s, the first permanent European settlers had put down roots there. In the half-century or so between the end of the War of 1812 and the outbreak of the Civil War, the town became one of the most prosperous communities in terms of per-capita income in the United States. The source of that wealth was the sea—shipbuilding, fishing, and providing the myriad goods and services required by those maritime industries. Families named Perkins, Dresser, and Dyer made money from those trades, and the extent of their prosperity can still be seen in the elegant Federal- and Greek Revival-style homes that line Main Street, Court Street, and Perkins Street in town. 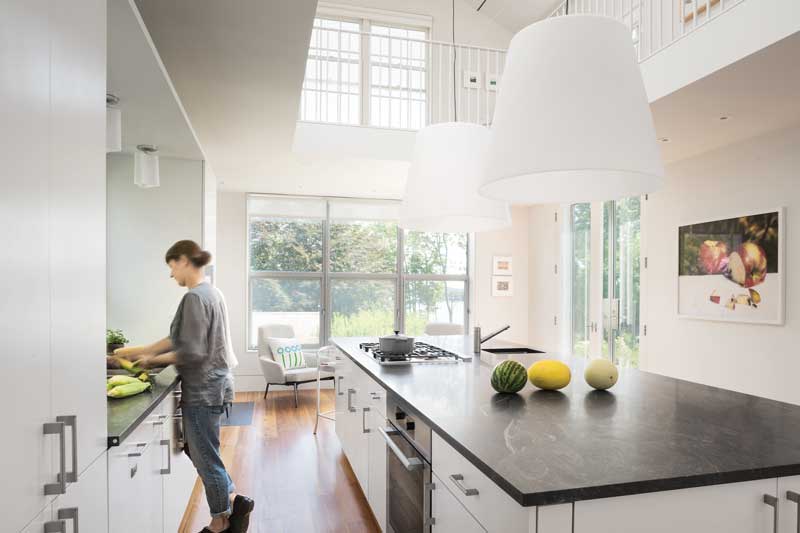 But inside, the barn and ell were completely redone to create an airy kitchen with easy access to the backyard and garden. 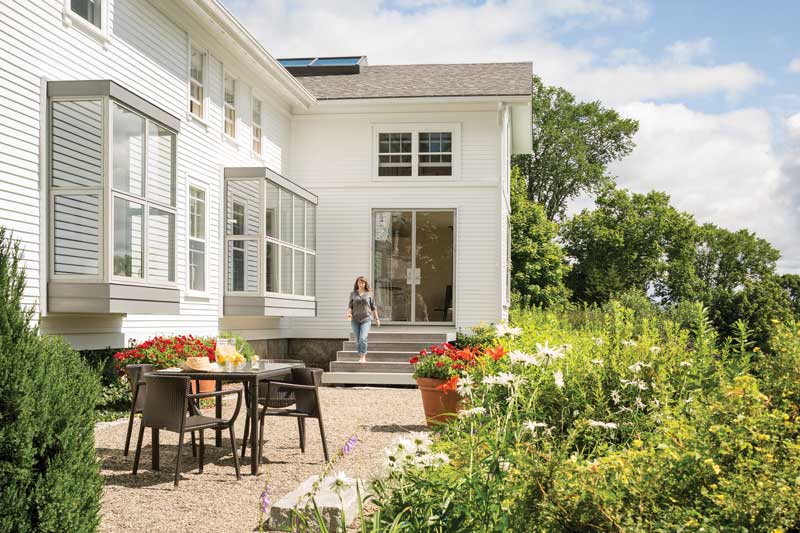 While Castine was at the height of its 19th century prosperity, Henry Austin was one of America’s most prominent architects. Based in New Haven, Connecticut, Austin was best known for the public buildings he designed, among them the Yale University Library, which was converted in the 1930s for other uses and is now known as Dwight Hall.

Austin also designed several private homes for an affluent clientele. At least two still stand in Maine, including the Moses Perkins House. Built in 1849, the simple clapboard house stands on Court Street overlooking the town harbor and what is now the Castine Yacht Club. The other is the elaborate Italianate brownstone Morse-Libby House in Portland, which is now the Victoria Mansion museum. Completed around 1860, it is considered one of Austin’s greatest works.

In 2006, an architect and a serious art collector from New York City bought the Moses Perkins House. After five years of living with it, the couple hired Elliott + Elliott to design and oversee the execution of some significant changes to the house, its attached barn, and the ell connecting the two.

The structure had already seen significant change over the course of some 160 years, according to Elliott + Elliott architect Corey Papadopoli. The kitchen, originally in the cellar, had been relocated to the ground floor. The barn, which was obviously no longer being used for livestock, had been closed off and was largely unused. Also, the first floor of the ell had been enlarged and an addition annexed to the rear of barn and ell. Some further makeshift renovations had added a stair, laundry, and bathroom to the space, Papadopoli said, as well as “this weird little stair that went up and connected the two floors [of the barn] that was almost unusable, sort of very tight and difficult to navigate.” 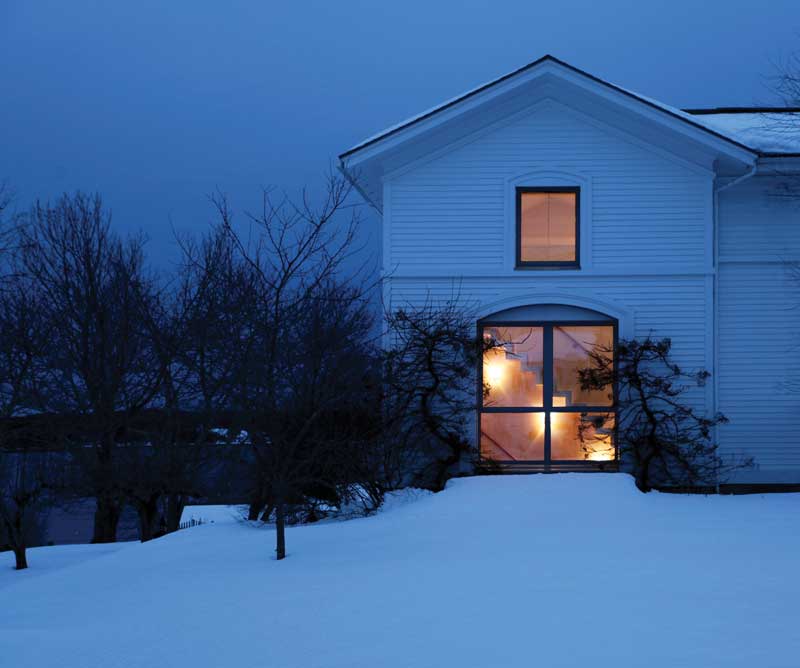 At night when newly installed sliding doors in the barn are opened they reveal decidedly modern glass and steel-framed windows installed in a doorway once used by livestock.

As things stood, only half the ground floor of the barn was being used and the second floor—once a hayloft beneath a towering roof—was not in use at all.

The owners wanted to find a way to use the barn space, create a better connection between the three floors vertically, and add gallery space on the second floor to display their art collection, Papadopoli said. All that had to be accomplished without any significant changes to the exterior of the buildings, which are within Castine’s strictly controlled Historical District.

“We did want to respect what was there, but we also recognized that what we’re doing is not 1849 era,” Papadopoli said. “So we set about trying to create a dialogue between old and new.”

From the street, the view is unchanged, at least in the daytime. Nothing was done to alter the house itself, and the ell and barn appear much as they do in a photograph taken around 1860. There are two tall sliding pocket doors at ground level where livestock would have entered the barn, and a smaller pocket door on the second floor that would have accessed the hayloft.

The view changes at night, though, when the doors are rolled back and light streams through newly installed glass windows from what is now a large, modern kitchen on the ground floor and the gallery space above it.

Light was central to turning the barn into elegant, usable space. 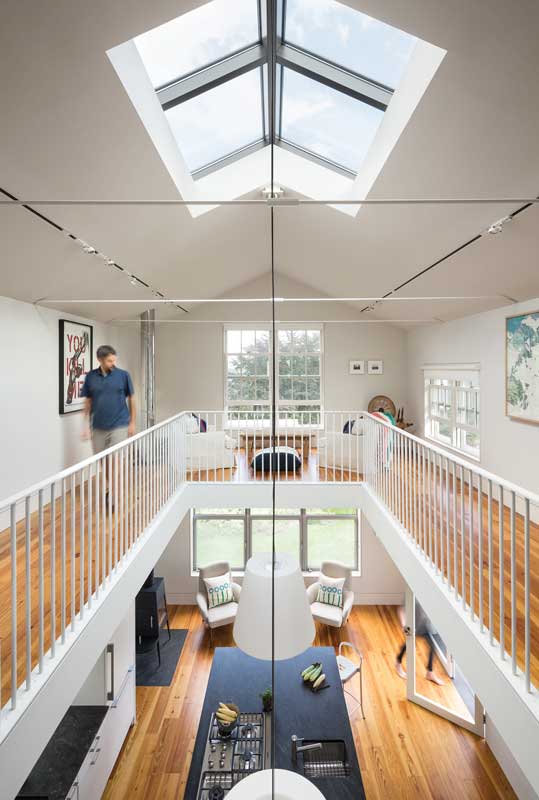 A hole was cut in the hayloft floor to create a gallery space that looks down on the kitchen. “The barn essentially became a kitchen—a big open space,” Papadopoli said. The architects cut a hole in the floor of the hayloft and then a hole in the roof, and installed a steel-framed skylight to bring light down into the kitchen below.

Opening up that floor exposed ties—some wood, some steel that had been added sometime in the past—that spanned the barn beneath its roof and held it together. Some of those ties were obviously fatigued, and were replaced with new ones fabricated from steel.

“We kept the wood structure that was there and we just added on to it with newer stiffer members, and we did the same in the walls,” Papadopoli explained. “Basically, the contractor built a whole new wall system inside the existing wall system to allow us to get plumb walls without affecting the exterior of the building so that everything inside is both level and plumb.”

Light also streams into the kitchen from the steel-framed windows, concealed behind meticulously fitted sliding panels, that fill the barn door openings, and from new bay windows with narrow steel frames in both the kitchen and in the ell that serves as a dining area and overlooks the elegant backyard gardens and distant Castine Harbor.

The kitchen features a large central island that holds a gas cooktop, oven, dishwasher, sink, and washer and dryer, and conceals all the complex electrical and plumbing systems required for the equipment. The stove includes a built-in downdraft exhaust that vents to the outside through under-floor ducts.

The flooring—heart pine—is an example of the attention to detail that characterizes the entire project. 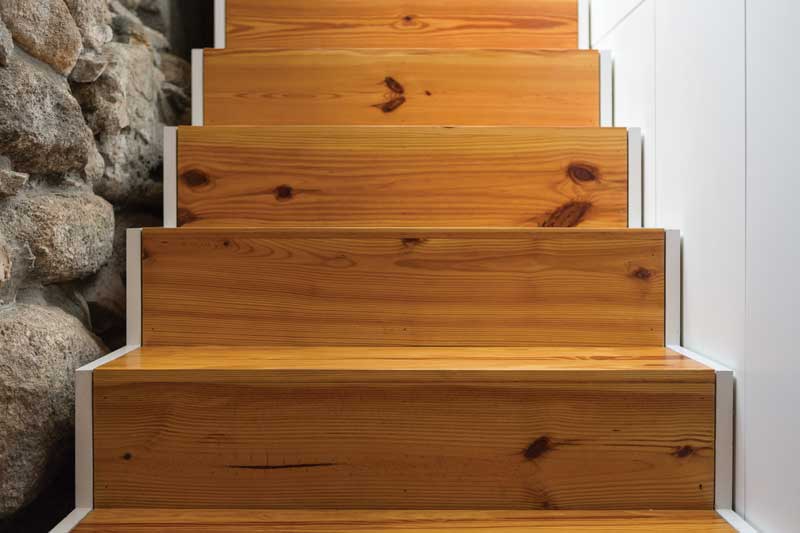 The stairs were slipped in between the exterior wall and new cabinets, forming the end wall of the kitchen.

Heart pine was also used for the treads and risers of the stairs that connect the now-finished cellar with the kitchen and the kitchen with the open gallery above. A steel frame supports the stairs at the top and the bottom with clear spans between the floors. The stairs slip in between the exterior wall and new cabinets, forming the end wall of the kitchen. “Everything is sort of in tension and wants to be sort of floating free and light,” Papadopoli said.

Except for a one-piece Carrara marble backsplash in the kitchen fitted precisely between two windows, the materials used were relatively simple: painted wood and painted gypsum board.

“We wanted everything white and clean to give as much light into these spaces as possible,” the architect said.

While the materials may be clean and simple, the way they were used was not. Trim, such as the baseboards, echoes the trim in the original house without trying to duplicate it.

The aim of the project was “to capture the essence while distinguishing the new work from the 19th century architecture,” Papadopoli said.

Mission accomplished. This 21st century renovation integrates with the old without sacrificing its integrity, and gives an old home a modern feel.

Book Review: Settled in the Wild, Notes from the Edge of Town