As autumn arrives, boats are hauled and quiet descends 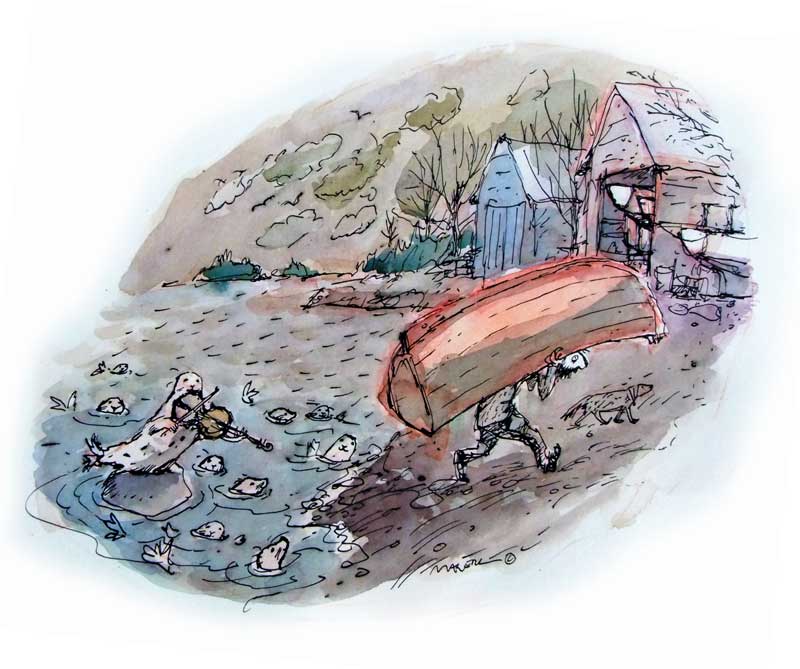 There will come a day, it comes every year, when Castine’s floating town docks will be hoisted out of the water with a crane and stacked in the municipal parking lot for the winter. Our platform for mackerel fishing is gone; the red and white “20-minute tie up” sign becomes sentinel to nothing. The harbor seals venture closer as the human activity withdraws and the yacht club has long stopped firing its cannon at the official, precise moment of sunset. Like turning back the clocks on Halloween weekend, we will be recalibrated for the impending season beside a winter ocean. We will be reefed.

The docks will rest until April, the barnacles, algae and seaweed gradually releasing their hold, shedding onto the macadam to stink on a surprise warm day in January. Dudley’s Refresher, the town’s dockside takeout stand, has closed for the winter, though its menu under the awning still advertises fish tacos, “a better chippy,” and ice cream—staples for summer visitors and hovering seagulls. This storing of the docks is the final phase of a ritual preparation for winter: freezing weather, flowing ice, and punishing Nor’easters that will sweep up the bay. Just as people begin to wrap the house, skirt the foundation with plastic sheeting, stack the firewood close to the ell, and call the man about snowplowing, the harbor too must hunker down. We are on the verge of the season in which it is weather’s turn to impose. It is the season of storage, of firesides, of interior work, of waiting.

Kenny Eaton, whose father, Alonzo, and grandfather, Mace, ran the adjacent boatyard before him, has been hauling boats out of the water for weeks… or generations. The landside of the boatyard fills with sailboats standing on their keels, braced by stanchions, to be power washed and then shrink-wrapped for hibernation. The weathered shingles of Eaton’s Boatyard, the steady retreat of equipment to the sheds amidst the cultch of boat-servicing hardware, the abatement of dockside activity, like the shortening days, herald yachting’s torpor. When you can see the propeller, rudder, and keel of a sleek sailboat, its charm is fled: the ungainly innards of some of its trick of flying before the wind with sheets has been exposed. The boat becomes an object of maintenance, not romance.

Eaton’s yard isn’t large and fills quickly, so the larger boats must be taken by trailer right out of town. Like a parade of nautical floats, mastless ketches and sloops, bulky cabin cruisers, and muscular workboats slip up Main Street by the Trinitarian church on their way out of town. Kenny tows them to his upland winter harbor for storage and repair: a massive Quonset hut next to a peat bog, 10 miles from the harbor, where the maintenance work of winter can proceed in the shelter of the woods. The engines’ vital fluids will be drained, the hulls scraped and caulked, sanded and painted; rigging retooled, remounted, revived. The wooden boats come up for air, dry and shrink, the fiberglass boats shed algae. Gallons of marine varnish are brushed into teak and mahogany decking, extending the usefulness of wood plying corrosive salt water. Even Kenny wonders, “why would anyone want to get involved with a boat?”

Back at the shore, the boatyard is a forlorn regiment of white rubber globes, buoys stenciled with the names of boat owners. They bob on the tide, but without a boat to turn its bow into the current they give no telltale sign of the direction of flow. A forest of masts during the summer, the harbor is now a field of buoy “erratics.” Nothing much interrupts flat water, skerries, and whitecaps except a channel marker. Nothing interrupts our inspection of the farms and forest on the opposite shore. All the leaves are down; buildings ghoulishly emerge from their summer cover. The hillsides are mizzened by maples and oaks. Nothing interrupts the perception of distance. There is no longer a middle ground in this picture.

But for a lone lobstermen, whose catch has not yet migrated farther out into the bay, the human boating presence on the water recedes, a tide of activity that will be out until the spring equinox, when the migratory process reverses. Kenny will haul the boats back down to the water and re-insert them, following some improvised sequence, parading back from bog side to harbor side. Freshly painted, newly engineered, ready for rigging, one by one, the boats float back to their globes. The docks will be dropped back in place at the town dock and patrons of Dudley’s will flock back like the seagulls at just around the time that “lilacs in the dooryard bloom.” And the 20-minute tie-ups will resume.

Todd R. Nelson is a writer living in Penobscot, Maine.