Eat a smelt, save a salmon 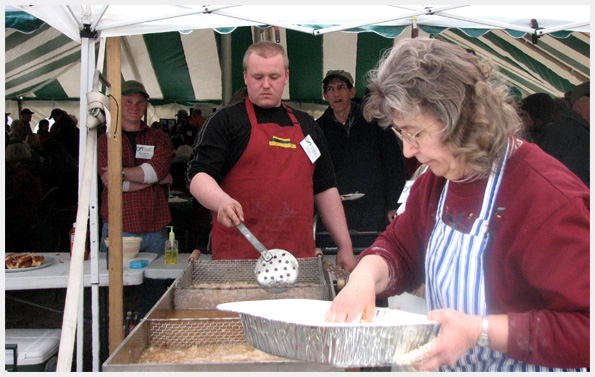 Marlene Farnsworth dredged freshly caught fish while Evan Emerson
fried a mess of smelts to crisp, flaky perfection. Photo by Karen O. Zimmermann
“First I catch them, then I clean them, then I cook them” said Evan Emerson, a sturdy young man with flour on his apron. He had just fried the last batch of fish for the Downeast Salmon Federation's annual Smelt Fry, an annual rite of spring and fund-raiser for the organization. Under a tent on the banks of the Pleasant River in Columbia Falls, more than 400 hungry diners helped eat those smelt, along with corn chowder, coleslaw, creamy layered potatoes, and an ever-changing selection of salads, pasta, and bread. Everytime a bowl was emptied, a new, equally tempting dish was put out in its place. The meal was topped off by whoopie pies, iced cakes, and other treats prepared by students in Machias High School’s Culinary Arts program. But the smelt were king, and a hardworking group of volunteers kept them coming. Muriel Gay and her sister Marlene Farnsworth dredged the shimmering silver fish in flour and cornmeal, and passed them to Evan Emerson, who fried them in the new, three-well cooker built at the Bucks Harbor Correctional Facility. Jane Copp, Muriel’s neighbor, had never been to the smelt fry before, but came down from Jonesboro to help feed the crowd. The final count was about 174 pounds served, according to Emerson. 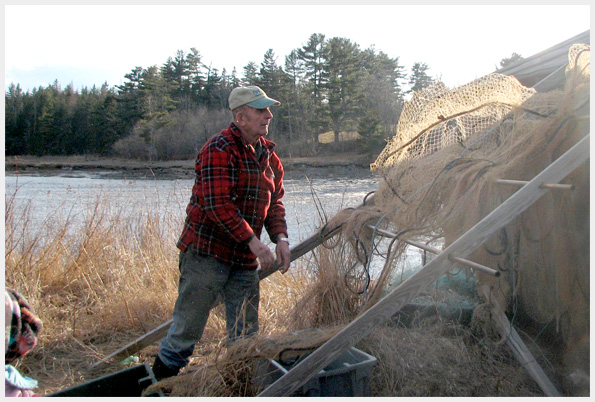 Lewis Emerson tosses his nets to help them dry as the sun sets on the Pleasant River.
Photo by Karen O. Zimmermann
Emerson has been helping his grandfather Lewis Emerson and his father fish for smelt since he was big enough to go out in a boat. The Emersons, Sewell Look, and Stevie Tibbets all donated their catch for the smelt fry. They also cleaned the fish, and while Evan Emerson cooked, Lewis and Sewell were down by the riverbank, telling visitors how they catch these fish, and showing the delicate nets they use. “Sometimes I fish under the ice,” Lewis explained, holding up a small spruce bough. “I tie this to a net and drop it in one hole, then go down-river to another hole I cut, and hope I catch the spruce,” he laughed, “and the net of fish, too.” As he pulled out the first net, a second one followed it into the water. Spirits were high as the long line edged closer to the buffet of side dishes and the hot crispy smelts at the end of the line. By the time the food was reached, names had been exchanged, friends made, and stories shared. “I first came as part of a class I was taking with Kevin Kline at College of the Atlantic,” said Jasmine Smith of Bar Harbor. “It made such an impression. I have come back every year since.” She has also had her sixth-grade students illustrate some of the concepts she is passing on as a student teacher, including salmon anatomy, life-cycle, and habitat concerns. These have been scanned and turned into notecards, which are sold to benefit the Downeast Salmon Federation. The tables were still crowded when the band, named (appropriately enough) Live Bait set up and began to play a few tunes. John Viselli, Sepp Huber, Curtis Russet and Sheila Unvala fiddled, whistled and sang. Feet tapped, bellies were full, and diners relaxed. “They are fighters” said Viselli, speaking about the Downeast Salmon Federation, and why his band comes each year to play at this event. “They don’t care about the politics, they just care about the river, and the salmon,” he added. Crispy fried smelt, fishing tales, lively music, and plenty of good company might have been enough to draw people together, but one shared concern was the real reason for the smelt fry: the need to conserve the wild Atlantic salmon. All proceeds benefit the federation’s Pleasant River Hatchery at the Wild Salmon Resource Center in Columbia Falls. The DSF's mission is to conserve the fish and its habitat, restore a viable sport fishery, and protect other important river, scenic, recreational, and ecological resources in eastern Maine. Dwayne Shaw, executive director of the DSF, was there, ready to stop and discuss the state of the salmon population, river restoration, and water quality. Informative tables manned by staff and volunteers explained the mission and projects of the federation, and to tell folks that the hatchery is open for tours from 4 p.m.-6 p.m. For more information call 207-483-4336 or visit www.mainesalmonrivers.org.