Illustration by Sam Manning.
The most beautiful thing we can experience is the mysterious. It is the source of all true art and all science. He…who can no longer pause to wonder and stand rapt in awe is as good as dead. His eyes are closed.
—Albert Einstein
Dear Friends: Sleep is natural, especially in the winter. Hibernation is not just for the bears. With the weather forbidding, the ground frozen, and the nights long, what better than to catch up on all that sleep we lost last summer, or last year, or back in our 20s and 30s when sleeping was optional, but partying wasn’t. 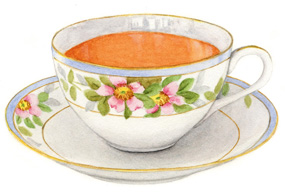 Illustration by Candice Hutchinson.
Now that I’m older, hibernation done right can be an extreme luxury. After dinner I’ll sit by the stove and get drowsy over a theology text or a history of the Transcendentalists and a cup of chamomile tea. The book works as fast as the tea—faster, actually. Then, when my eyes start to close I’ll hoist myself up one more time, brush my teeth, give my honey a kiss, and pad up to our huge bed in the cold northeast bedroom from which you can see both the mountain and the bay. One more sip of tea and one more page of Emerson and Alcott with my skull on the pillow and my bones under the quilt, and, brothers and sisters, I’m gone where good bears go. Bears have it easy. All they have to do is fatten up on free wild blueberries and beechnuts, find a warm den for the winter, and let Nature take her sweet course. We have it a little harder. For one thing, some people are morning people and some are night people. And wouldn’t you know it? They end up marrying each other. For another thing, bears don’t have to go to work or to school all through the long winter. Anyone who has tried to rouse a sleeping teenager for four years of early morning calculus or civics or European history will see the sublime wisdom of starting classes at a saner hour, as many secondary schools now do. Question: How many promising careers have been nipped in the bud by a naturally somnolent adolescent brain that didn’t start working effectively until 10:00 in the morning, even though the body appeared reasonably operational by 8:00? Answer: Millions. Wild speculation I suspect the experts may one day find ancient evolutionary reasons for all this. Survival once dictated that some stalwart souls stay awake at night to tend the fires and fight off the giant marauding chinchillas to save the peaceful, primal village from destruction. What’s more, the young have always wanted to do their courting at night. No courting, no babies. No more babies, no more us. See? It makes survival sense. Students, show this to your parents, who may not yet be too old to remember. And if that doesn’t work, try reading this column in bed. It could help put you to sleep. Field and forest report, early February Yes, the bears are slumbering soundly in their dens for the duration, and the chipmunks in the woodpile, and the frogs in the mud of the pond, but on a milder night the skunks may rouse themselves and rustle about in the dark, and the porcupines may rise to greet the dawn with reverence. During the day, cedar waxwings flock to feed on last year’s old apples, rose hips, and viburnum berries. At night the birds retire into the treetops and the thick puckerbrush to hunker down, slumber lightly, and knit up the raveled sleeve of winter care. Sleep, sleep soundly, one and all. Sleep-pods to carry to bed with you From Plato: “How can we determine whether at this moment we are sleeping and all our thoughts are a dream, or whether we are awake, and talking to one another in the waking state?” And from Leo J. Burke: “People who say they sleep like a baby usually don’t have one.” Field and forest report, mid February Flocks of mourning doves arrive daily. They strut with their spouses under the birdfeeder and speed on squeaking wings from tree to tree. We even hear a pileated woodpecker’s love call coming from the old sugar maple behind the town hall on some mornings. A few starlings return, the vanguard of the myriads of black birds we’ll see in a few weeks. Last year at this time someone said at the post office that they’d seen a flock of cardinals in their apple trees. I’m thinking they might have been waxwings, which are fruit eaters, while cardinals are seed eaters. The cedar waxwing does look like the female cardinal, though. 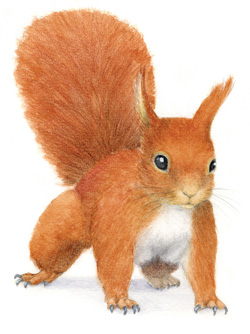