...and how about those chickens? 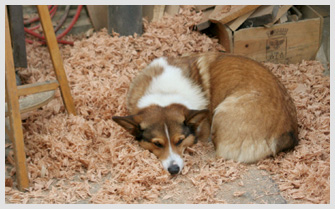 One boatyard corgi. Photo by Leila Murphy
Here we have a Pembroke Welsh corgi, originally bred for herding. That’s an occupation that seems unusual for a boatyard dog, but consider all they are called on to do in Dick Pulsifer’s Brunswick boatshop, where there are always corgis about: There are boatbuilder Pulsifer himself and his assistant to keep in line, visitors to protect from all those sharp boatbuilding tools, and a bunch of chickens to keep out from underfoot. (Boatyard Chickens? What’s next? Boatyard Bunnies?) Big in body, short in leg, corgis make wonderful pets and—believe it or not—spectacular guard dogs. They might spend a lot of time sleeping in the shavings—Pulsifer builds wooden Hampton boats—but if anything untoward should happen, they are right on top of the job. 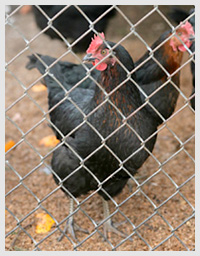 Several boatyard chickens.
Photo by Jamie Bloomquist
They are short, it’s true, but given provocation they have what’s best described as attitude. Nobody even thinks about messing with the Pulsifer boatshop when they’re around.

We’d like to see your Boatyard Dog® (OK, OK, or cat... or even chicken). Send a clear photo and pertinent details to BYD, P.O. Box 566, Rockland, ME 04841 or editor@maineboats.com. Don’t miss the wild & crazy Eighth Annual World Championship Boatyard Dog® Trials! August 15, 2010, during the MBH&H Show in Rockland. Click here for more information.