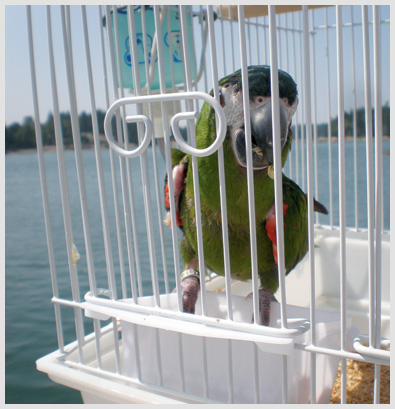 Pilar lives aboard the Roberts 36 Anudari.
Photograph courtesy the Taylors.
We know it’s difficult to imagine—in fact, there are those who believe that what we are doing is wrong, Wrong, WRONG—but the Boatyard Dog this time around is a bird. Actually, it’s a parrot, in particular a Hahn’s macaw (Ara nobilis nobilis), and she spends much of her time on Penobscot Bay aboard Anudari, a Roberts 36 cutter owned by Kate and Ellard Taylor. The Taylors sent us these particulars: “Our pet parrot, 17-year-old Pilar, was adopted by Ellard Taylor from a Santa Fe-based bird rescue mission in 2000. When we moved from Head Harbor, Isle au Haut, to Pulpit Harbor, North Haven, last August with the rest of the family (two boys, their parents, a dog, and a cat), she came with us. She continues to travel aboard Anudari between the two Penobscot Bay islands, spending moored time on Isle au Haut (in Head Harbor and the thoroughfare) and North Haven (in Fox Island Thorofare and Pulpit Harbor). “On board, Pilar is the cabin alarm clock, chirping persistent, crisp ‘Hellos’ starting precisely at 6:30 a.m. and ending when the sweatshirt is taken off her little white cage. The tiny animal, a teenager in bird years, entertains her fellow sailors by mimicking a variety of sounds: copying the deep whir of the diesel engine, shouting “Whaaaack” as waves strike our steel hull, exclaiming “Good luck!” when anyone gets into the skiff, and greeting them with “Ahoy!” upon their return.”

Entries Open for 2011 Boatyard Dog Trials The wild and wacky World Championship Boatyard Dog Trials will return in 2011 as part of the ninth annual Maine Boats, Homes & Harbors Show, August 12-14, 2011, in Rockland. Click here for photos of previous shows and details on how your dog (sorry, no parrots allowed!) can enter the trials.