By Rob McCall
The year that is drawing towards its close has been filled with the blessings of fruitful fields and healthful skies. To these bounties, which are so constantly enjoyed that we are prone to forget the source from which they come, others have been added, which are of so extraordinary a nature, that they cannot fail to penetrate and soften even the heart which is habitually insensible to the ever watchful providence of Almighty God.
—from Abraham Lincoln’s 1863 Thanksgiving Proclamation

Illustrations by Candice Hutchison (3)
In rural New England it’s a regular thing to see a few old kerosene lamps around in preparation for the next power outage. We’ve got some beauties. We also have old cross-cut saws, lanterns, a treadle sewing machine, a hand mill, a hand pump, and various other hand tools collected over the years in preparation for the time when the power just doesn’t come back on again. Many have such things all stored away in the barn or shed right where Grandpa left them. Hauling all of this stuff out of the barn and selling it to someone from Massachusetts who will put it on their front lawn or hang it on the wall in their den has been part of the Maine economy since, oh say, the French and Indian War. It’s about having what you need when you need it. Just rummaging through my backpack I find matches, birch bark for tinder, a folding multi-tool, a lock-back knife, small binoculars, a magnifying glass, a tape measure, a comb, a can of sardines, a fork, and some Benadryl for bee sting. It all comes down to the Boy Scout motto, “Be Prepared,” which we learned in our early teens and have never forgotten. Writ large, “Be Prepared” expresses itself in the survivalist and back-to-the-land movements, the members of which swoon over solar panels, windmills, hand pumps, and horsepower that uses real horses. “Be Prepared” is seen in the urge to find alternative sources of energy before the oil runs out. It is also seen in the apocalyptic fervor that sweeps the country more and more frequently in hard economic times like these. For example, note the radio prophet last year who predicted the end of the world for May 21 and then again for October 21, earning the distinction of getting it wrong twice in five months. That date, by the way, was one day before the anniversary of the Great Disappointment of 1844, when self-styled prophet William Miller predicted the destruction of the earth by fire falling from heaven and the second coming of Christ, and it didn’t happen. Why anyone would consider this a disappointment is something to ponder. Coming up next is the end of the Mayan calendar on December 21, 2012, when the finale will supposedly come with a giant tidal wave. That could be handy if fire is falling from heaven. It’s tough to know how to prepare for something like that. A multi-tool and a can of sardines probably won’t to do it. Mountain report, early November Awanadjo, the Algonquin name for Blue Hill, means “small misty mountain,” and so it is these days, with clouds hanging low over the summit on cloudy days and mists rising from the slopes at dawn on sunnier days. The mountain is busy with climbers this time of year, and since it is hunting season, blaze orange ought to be the fashion statement for all. A tragedy would help neither hunters nor non-hunters. I started up Awanadjo on a frosty morning last year at this time to find several pick-up trucks and ATVs idling on the Morse field. Soon a helicopter came arching over the mountain. Talk about “Be prepared,” they were getting ready to change a handful of propane tanks that run the emergency generator for the cell-phone/TV/radio tower commercial complex that stands (on land declared forever wild!) near the summit. It took several hours and six men, one helicopter, two ATVs, two large fuel trucks, and several pick-ups to do the job. So be not dismayed. If the tidal wave is not more than 1,000 feet high, you’ll still be able to use your cell phone in the event that the wave or the fire falling from heaven should interrupt electrical service. Seedpod to carry around with you From Tom Lehrer: “Be prepared! And be careful not to do/Your good deeds when there’s no one watching you./If you’re looking for adventure of a new and different kind,/And you come across a Girl Scout who is similarly inclined,/Don’t be nervous, don’t be flustered, don’t be scared./Be prepared!” Field and Forest report, mid November The eastern larch, also known as tamarack—or “hackamatack” as it is called around here—is wearing its gorgeous autumn coat of burnt gold, enough to set the heart on fire when aglow in the afternoon sun. The name “tamarack” in Algonquin means “wood for snow shoes.” The tree’s roots are also used for ship’s knees. 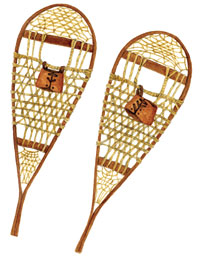 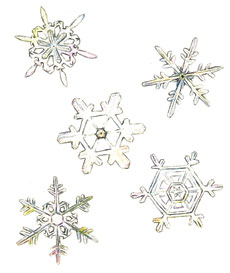 The day dawned a muffled gray with a chill breath coming off the water. The dome of sky looked like weathered bone, the inside of a skull, as the damp, leading edge of a winter storm began to flow in from the North Atlantic, creeping into the harbor and under my coat and hat. We filled the wood boxes and collected the snow shovels, idle since before Christmas. By late morning, a bit sooner than expected, powdery snow was dancing and swirling through the air. Soon it began frosting the cold, bare ground like confectioner’s sugar, only not so sweet. Finches, crows, and squirrels fed nervously on nuts and seeds in the yard, stocking up before the storm. “Snow that’s fine lasts a long time,” goes the old Maine saying, so—like the squirrels and finches—people hurried about their errands and jobs, hoping to get home early before the snow got too serious. By noontime the snowflakes were large and sticky, flying sideways, and everything was covered with a blanket of white. The wind was blowing a gale from the east and hooting and huffing in the chimney. The plow trucks rumbled along the state highway through town several times each hour, but were unable to stay ahead of the storm; the roads were soon snow-covered. The ambulance came and went again and again, and I trudged down to the busy hospital ER to visit a lovely 85-year-old lady who was thanking the Lord that she ended up in a soft ditch and not wrapped around an immovable tree. By mid-afternoon the daylight was getting dusky and the snow was easing up a little, but the gale blew on, swirling curling clouds of white through the air and forming drifts in the lee of the house. A mourning dove in its fluffy down coat sat stoically in the pear tree, nothing moving but its head as it surveyed the storm. As the sun sank softly into the snowy woods, everything—sky, snow, white houses, and woods—glowed for a moment with soft phosphorescence like the pearly gray of the dove’s breast. That’s the story of the first snow storm of the New Year. Rank opinion The storm is at its most beautiful just before the snow stops falling, before the smooth, sculptured surface is broken by boot prints, pocked with clumps dumped from branches, pushed by plow trucks (God love ’em), splattered by speeding cars, or even marked with the myriad heart-shaped monograms of deer tracks. It is a fleeting moment, as though the world is holding its breath and its perfection at once, and it is soon gone. That’s the almanack for this time. But don’t take it from us—we’re no experts. Go out and see for yourself.
Yr. mst. hmble & obd’nt servant,
Rob McCall