Family in the front, fishing in the back, combined with speed and nimble handling

The Southport 29FE can travel at speeds in excess of 40 knots. Still, it remains roomy and thanks to its electronic control system, is a joy to drive. Photographs courtesy Southport Boats
By Dave Getchell, Jr. The first time I realized the speed potential of these Maine-built center-console boats was when a Southport idled up to the docks at the Maine Boats, Homes & Harbors Show. The operator was wearing a slightly silly ear-to-ear grin. “What are you looking so happy about?” I asked. “Well,” he said, glancing at his watch, “I left Belfast Harbor 31 minutes ago.”
I winced and chopped the throttle a bit... Okay, so maybe we went airborne for a few seconds, but there was zero drama.
Belfast to Rockland is 27 miles by water and 25 by land; the drive usually takes 45 minutes via U.S. Route 1. You do the math—this boat literally can travel faster than a car. I would expect a twin-outboard, 600-hp, deep-V sportfish boat designed by C. Raymond Hunt & Associates to be plenty quick, but there’s more to this one than mere velocity. The 29FE is a new version of the Southport hull aimed at owners who want to balance fishing utility with family comforts. 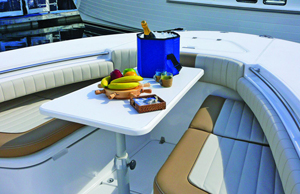 The seating area forward includes a table for family meals. Alternately, the table can drop down to create a large platform area.
Aft of the console, this boat is all business, with tackle station, rod holders, rod lockers, live well, washdown, and a transom door to haul lunkers aboard. Forward it’s family-friendly, with cushy settees and a center table that can host a picnic or drop down to form a sunbathing platform. Clever storage cubbies abound. The center console conceals a commodious head, with full standing headroom, sink, mirror, and still more storage. Fit and finish is to yacht standards everywhere you look. During my sea trial on the boat off York Harbor, the Southport 29FE displayed a remarkable combination of talents. The first party trick came courtesy of its Yamaha Helm Master electronic control system. The joystick offered video-game low-speed control even in crosswinds and swirling currents. It was a bit disconcerting at first to tweak the stick and have the big outboards crank in different directions, with one in reverse and one churning forward, but the control is intuitive. It does not take much learning to sidle the big Southport sideways, then crab it back and forth at will. Docking this thing was a simple pleasure. 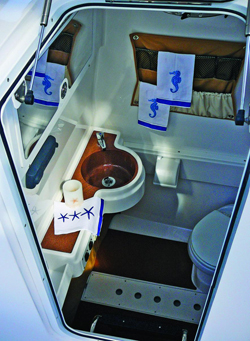 The center console hides a head with full standing room.
Threading out through the twisting tide-race of a channel, the Southport’s padded wheel steered easily, the boat showing good headway-speed maneuverability, which is not normally a strong suit of deep-V hulls. Once outside and (quickly) up to speed, the beamy, Carolina-flared boat shrugged off a lumpy two-foot chop. The real eye-opener was how it handled big offshore swells. These sort of long-period waves can travel at 30 mph, and since we were clipping into them at 40-plus, the closing speeds were impressive. We punched through the first few sets with a soft initial hit and no spray in the boat. Then as one particularly ominous swell reared up, I winced and chopped the throttle a bit, but the boat just sliced through as though the roller was hardly there. Okay, so maybe we went airborne for a few seconds, but there was zero drama. 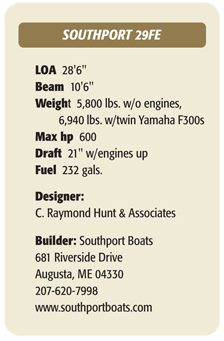 Then Tim Greer, the Southport rep, took the wheel to demonstrate the boat’s high-speed stability. We were barreling along at around 40 knots. “Hang on,” he said, cranking the helm hard over. The boat just dug in, tracked around, and tore off in the opposite direction—no porpoising, no cavitation, no bogging. He explained that the designers’ careful attention to clean water flow off the hull and around the outboard lower units makes all the difference. All too soon we were idling back into the harbor, where a fly-fisherman standing in a skiff surveyed the rakish machine sliding past. “Nice boat!” he hollered. Now I know where that silly Southport grin came from. Associate MBH&H Publisher Dave Getchell grew up piloting small powerboats along the Maine coast. Some 50 years of watery adventures have taken him as far north as Alaska and James Bay, as far south as Costa Rica and Belize. Slide show: The 29FE from Southport Boats is speedy, family friendly, and equipped for the serious boater. Photos by Billy Black