An Art to be Simple

On one of his trips to Maine, the poet James Schuyler stopped at the Sabbathday Lake Shaker Village in New Gloucester. The poem inspired by that visit, “Shaker,” highlights the spare design for which the Shakers are famed. “There was simply/nothing to look at,” the poem begins, “a white empty room/with pegs to hang/chairs on.”

In honor of that spiritual community and its artisanship, the Farnsworth Art Museum in Rockland’s exhibition “The Shakers: From Mount Lebanon to the World,” features works from the Shaker Museum | Mount Lebanon, the Sabbathday Lake Shaker Village, and several major museums. Some 200 objects, including the minimalist furniture, boxes, and other household items for which the Shakers are renowned, are on display. 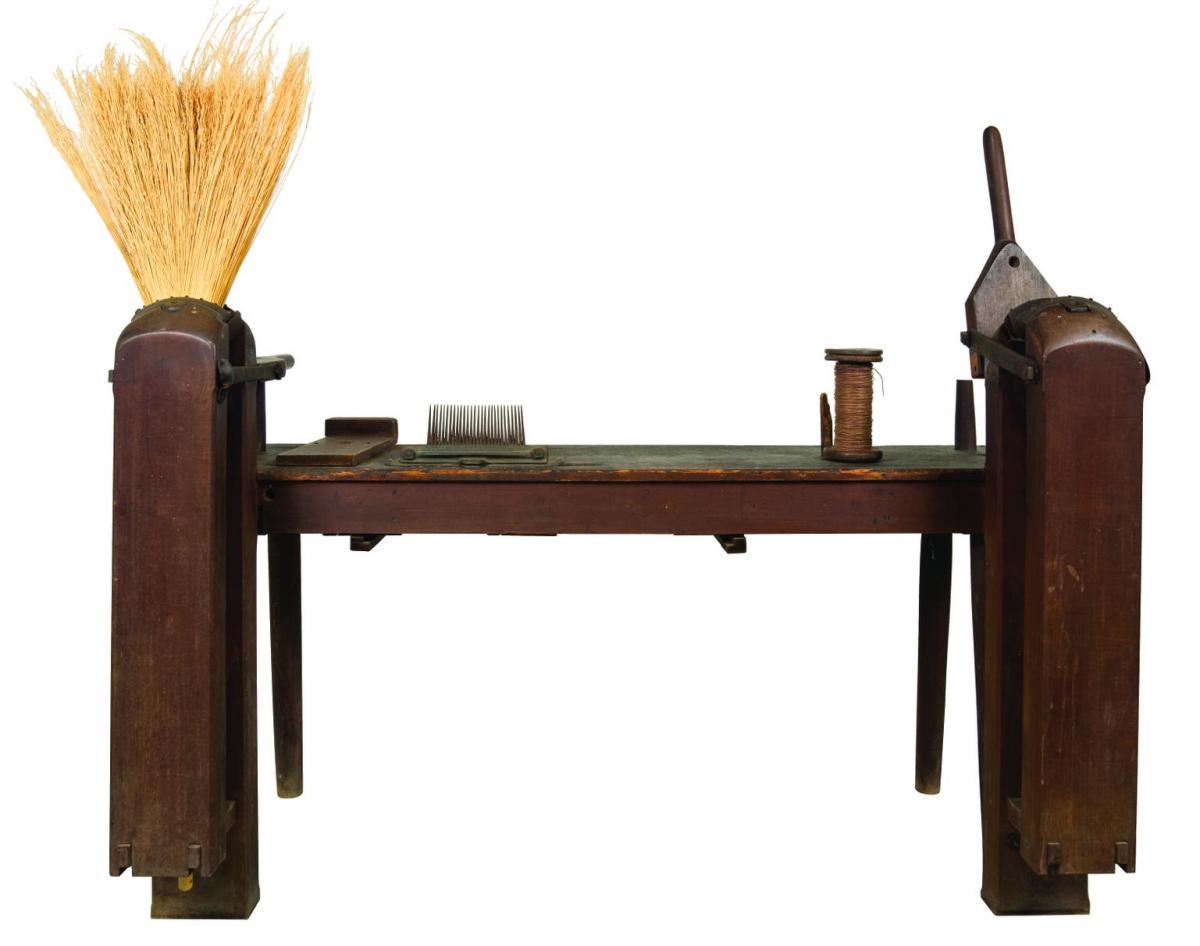 Here you will find the classic ladder-back chairs, benches, tables, trunks, and other functional furnishings meticulously crafted of cherry, birch, oak, pine, and other woods. Not all decoration was eschewed. Brother Jacob Fasting’s wall shelf (1876) is downright ornate in its carving while Brother Shubal Vane’s bible box (ca. 1875) is a tour de force of scrollwork. 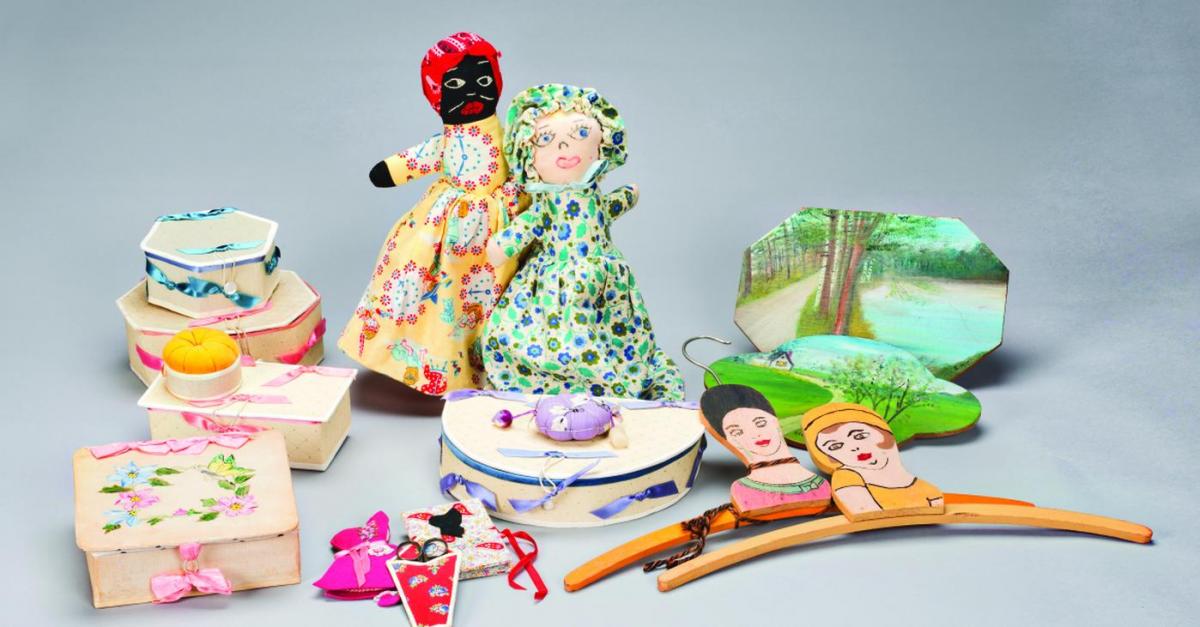 The Shakers did not mind a little decoration. Sister Elsie McCool (1900-1993) made these flapper coat hangers, circa 1920, shown along with various other accessories. Collection of the United Society of Shakers, Sabbathday Lake, Inc. Photo by Alan LaValle

Examples of Shaker ingenuity are on display, among them, a laundry press, a mortising machine, a broom-making table and a remarkable armchair-turned-wheelchair. Clothing is represented by a wonderful clutch of bonnets, as well as cloaks and Shaker “uniforms.” Most unusual, perhaps, are several flapper coat hangers featuring the bobbed-haired heads of women.

Originally founded in England in the first half of the 18th century as an off-shoot of the Quakers, this communitarian order went on to establish settlements in America, most notably at Mount Lebanon, New York, which became their home base. The exhibition highlights their spiritual tenets by way of original texts written and published by the Shakers. Their pacifism and focus on equal rights for women remain an inspiration. 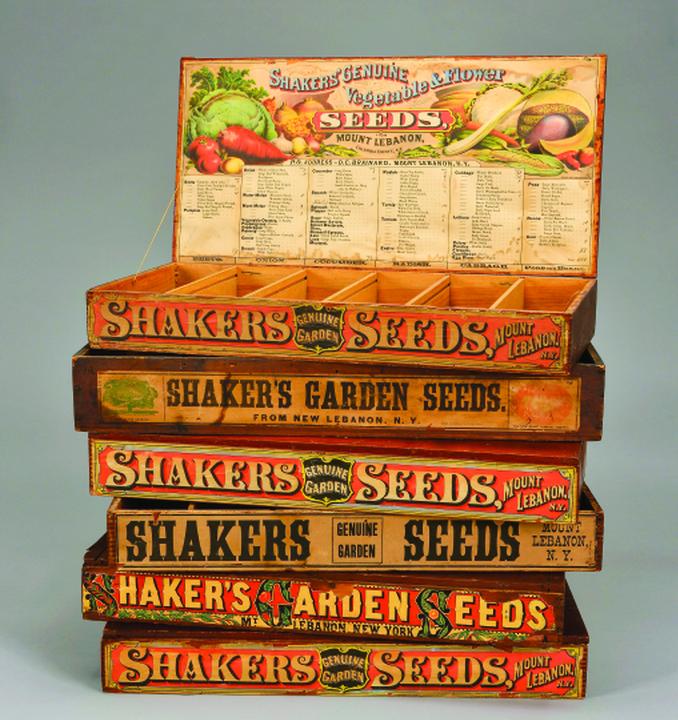 “America’s largest and longest-lived experiment in communal Utopianism,” as Michael Komanecky, the Farnsworth Art Museum’s chief curator calls the Shakers, eventually spread beyond the northeast. In the last half-century, however, their numbers have decreased drastically. With only three members, Sabbathday Lake is now the only active Shaker village in the country.

And active it is. With the help of volunteers and full- and part-time staff, the Sabbathday Shaker community offers craft workshops, an herb fest, folk concerts, and tours every year. One example: in a kind of act of aesthetic and spiritual solidarity, they open the grounds to the Maine Native American Market and Demonstration (this event, co-hosted with the Abbe Museum, will take place August 23, 2014).

James Schuyler’s poem ends with this vision: “I looked back/at the girl who looked/back/at me: perhaps to be/the last Shaker/at Sabbathday Lake.” The Farnsworth exhibition and a new video about the Shaker community in Alfred, Maine, are helping to revive interest in this extraordinary society and its simple gifts to the world.

The Shakers of Sabbathday Lake are the recipients of the Farnsworth’s 2014 Maine in America Award, which honors an individual or group who has made an outstanding contribution to Maine’s role in American art. “The Shakers: From Mount Lebanon to the World” runs through January 4, 2015. For more information, visit www.farnsworthmuseum.org.