By Rob McCall
“One of these days winter is going to run out of breath, but it is the sun itself that marks the time unmistakably. It is approaching the rim of the winter quadrant, rising more nearly due east day by day, and its shadows now point toward spring.” -—From the American naturalist Hal Borland, 1900-1978 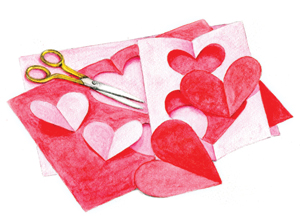 Illustration by Candice Hutchinson
Dear Friends: There is no doubt that it has been a hard winter in these parts. Everybody knows it. Somehow the creatures seem to know it too. By now we might normally expect to see starlings and redwing blackbirds returning in flocks, and mourning doves returning in pairs from warmer climes. By now we might expect to see ducks pairing off and nesting in the scrub by the water. But these creatures seem to be holding off on their annual rituals. Ice still binds the lakes and streams and covers most of the harbor. Old snow hardens enough to walk on overnight, but softens and scatters in large crystals underfoot by midmorning. Meanwhile, woodpiles shrink to less than a quarter and fuel trucks tirelessly ply the washboard roads. Still, it is a nice surprise to open a south-facing door and feel the warmth of the sun on your face. It’s a bit like seeing a loved one you have missed or only seen from a distance for so many months. And as the sun moves relentlessly northwards, the days get longer, too, and we naturally wake a little earlier from our nightly hibernations. According to the Old Farmer’s Almanac, the length of days and angle of the sun are about the same now as they were in late October and we see the same bleached white light as those days. It’s what John Gardner called ‘October Light’ only now it’s March. So hug your honey if you have one, don’t take the quilt off the bed yet, and kick in a little donation to your local fuel fund if you can afford it. There are plenty of people out there still locked in a life and death struggle with Old Man Winter. Heaven knows they could use the help. Natural and un-natural events, February 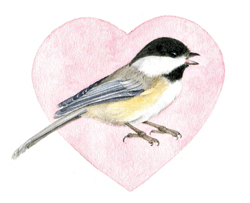 Illustration by Candice Hutchinson
When we were in grade school we usually had a Valentine’s Day party when each of us could give valentines to our favorite classmates. This was also the chance to tell your secret crush how passionate your feelings were, and then maybe not sign the card, because when it comes to love, fantasy trumps reality. There were always some of us who got few valentines, and none from the exalted demigods of our class. We lesser mortals looked out for each other, though, and cards were exchanged among the un-cool who still had an inkling of respect for each other’s feelings. For that special someone, chocolates or heart candies with little love notes imprinted on them were just the thing. This sort of courtship behavior is not all that different from many species of birds who court by giving food or shiny trinkets to the object of their affections. Bower-birds of Australia and New Guinea even make large attractive “valentines” constructed out of twigs, colored leaves, shells, stones, and found objects to attract their mates in the name of, and in the game of, love. Wild speculation Imagine what could happen if you love-showered a few unsuspecting souls with vigilante valentines. Get some red paper and cut out scores of hearts of all sizes. Hand one to the cold and bored highway flagger who risks his life to prevent a head-on collision. Give one to the checkout woman, the grocery bagger, the bank teller, the floor sweeper, the housekeeper, the fast food worker. Leave one on the counter at the lumberyard, the auto parts store, the post office, and the library. Leave one with your tip for the waitress. Put a bunch in the mail-drop, the night deposit, and the offering plate at church. After all, love’s not love until you give it away. Field and forest report, early-March Woodsmen are still felling and skidding out maple, birch, oak, and ash while the ground is frozen and before the sap starts running, preparing firewood for next winter before this one is even over. Farmers are out in the sugar bush hanging buckets or stringing yards and yards of plastic hose to their maples in anticipation of the warm days and cold nights needed to start the rise of sugar in their trunks. Orchardists are waiting for a few warmer days to do their pruning, or they are bundling up and braving the cold to get it done now. Commercial operations do not have the luxury of waiting for warmer days. With hundreds of trees to prune, the work must go on regardless of the temperature. 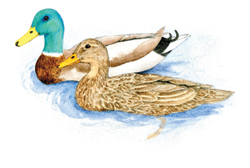 Illustration by Candice Hutchinson
Rank opinion Before we get too tired of winter, it’s good to remember how fortunate we are to live where the seasons actually mean something more than fake decorations in store windows. More people each year live in cities where snow is a nuisance rather than a delight, where cold is an inconvenience rather than a refreshment, and where their labors are the same day after day after tedious day regardless of the season. We are blessed to live way out here on the bumpy two-lane roads because it keeps us ever aware that we live on the great wheel of the seasons and are members of the great family of all living creatures. That said, it’s time for SPRING! Field and forest report, mid-March Maple sugar time is here and the sweet smell of sap steaming and birch wood burning fills the air with its healing perfume. The vital fluids that prevent the tree from freezing to death and keep it alive and healthy throughout the winter are distilled down by the woodsman into an ambrosial nectar that restores the vigor and timbre of winter-weary Mainers when poured on snow to make sugar candy or ladled onto a stack of pancakes or waffles to fortify us for a day out of doors. What was fuel for the forest is now fuel for the forester. And doesn’t that taste some good?
It is a nice surprise to open a south-facing door and feel the warmth of the sun on your face.
Natural events On the first day of spring our whole world was colored like the back of a colossal seagull or chickadee: mostly white, gray, and black in pleasing patterns; mostly soft, but sharp and hard in places. Rain and sleet fell, fog rose. Every elemental thing seemed to be suspended, unable to make up its mind whether to go forward into spring or backward into winter, teetering on the sharp cusp of the seasons, like the gulls lined up along the peak of the roof on the town hall, some facing north, some facing south. One could imagine the earth not turning for a moment, the clouds not flying, the winds not blowing, everything standing still holding its breath. Then a gust of wind and a warm shower moved over the mountain, and the gulls lifted off the ice in the harbor, circling and squawking. A frozen chunk broke off and bobbed down the mill stream and over the dam. The world turned a notch and spring arrived. Winter is not gone, but it is over. It is history. A little song of chickadee joy chirped in our hearts, a song not heard for many long cold months. We will make it. We will live. Seedpods to carry around with you From Henry David Thoreau: “We are affected like the earth, and yield to the elemental tenderness. Winter breaks up within us; the frost is coming out of me, and I am heaved like the road, and thoughts like a freshet pour down unwonted channels.” And from the poet Rainer Maria Rilke: “Spring has returned. The earth is like a child who knows poems.” That’s the almanack for this time. But don’t take it from us—we’re no experts. Go out and see for yourself. Yr. Mst. Hmble & Obd'nt servant, Rob McCall Rob McCall lives on Moose Island. This almanack is excerpted from his weekly radio show, which can be heard on WERU FM (89.9 in Blue Hill, 99.9 in Bangor) and streamed live via www.weru.org. His latest book, Great Speckled Bird: Confessions of a Village Preacher, is available through your local bookstore.

Winter and a few of my favorite things