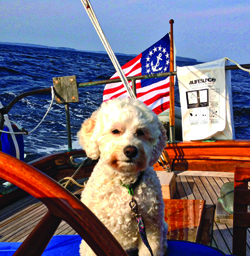 Rufus. Photo by Robin Lloyd
Rufus is an 8-year-old cockapoo (a cocker spaniel poodle mix) who has sailed much of his life, mostly on Penobscot Bay, with his owners Robin and Tamara Lloyd of Camden on Galatea, their 38-foot L. Francis Herreshoff ketch. The author of the historical novel Rough Passage to London, based on an ancestor who was captain of a 19th-century transatlantic packet, Robin is hard at work on a new book about Civil War-era blockade runners. No word yet on whether Rufus will play a role. 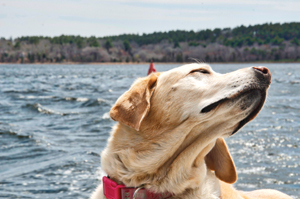 Sierra. Photo by Michael Magni
Sierra was a stay-at-home dog until she joined the team at Cape Cod Shipbuilding Company in Wareham, Massachusetts. An 11-year-old yellow Lab, Sierra keeps close tabs on her companion, company President Gordon Goodwin, and is ready to lend a paw for any boatyard task. Here she is on a test sail of Cape Cod’s new Marlin Heritage 23. Do you have a dog that helps on your boat or accompanies you alongshore? We’d like to see your water-friendly canine. Email a clear photo and pertinent details to editor@maineboats.com or mail it to Boatyard Dog, P.O. Box 566, Rockland, ME 04841.