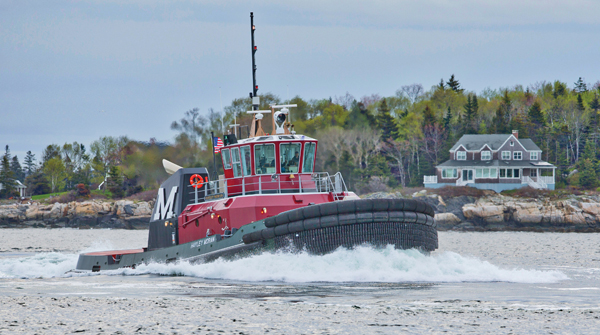 Designed in-house by Bruce Washburn, the Hayley Moran is the 26th tug Washburn & Doughty has built for Moran Towing, which has ordered several more tugs from the Maine builder.
Story and Photograph by John Snyder Hayley Moran, one of two harbor tugs that Moran Towing had commissioned last year, entered service in June 2014. 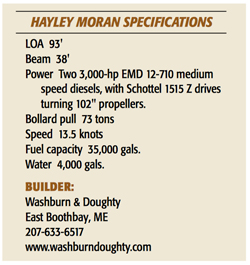 Christened and launched last winter at the Washburn & Doughty shipyard in East Boothbay, Maine, the 93-foot long, 38-foot wide, 6,000-hp tractor tug is now based in Port Arthur, Texas, where it is the most powerful ship-docking tractor tug at the region’s busy port. A James A. Moran-class Z-drive tractor tug, the Hayley escorts and docks petroleum product tankers, U.S. Navy ships, and various classes of freighters. Washburn & Doughty is Maine’s premier builder of modern, high-powered tractor tugs; this is the 26th vessel to be built by the Maine yard for Moran Towing, which is based in Canaan, Connecticut. John Snyder is a multimedia journalist specializing in the marine industry.