All photos by Trish Romano 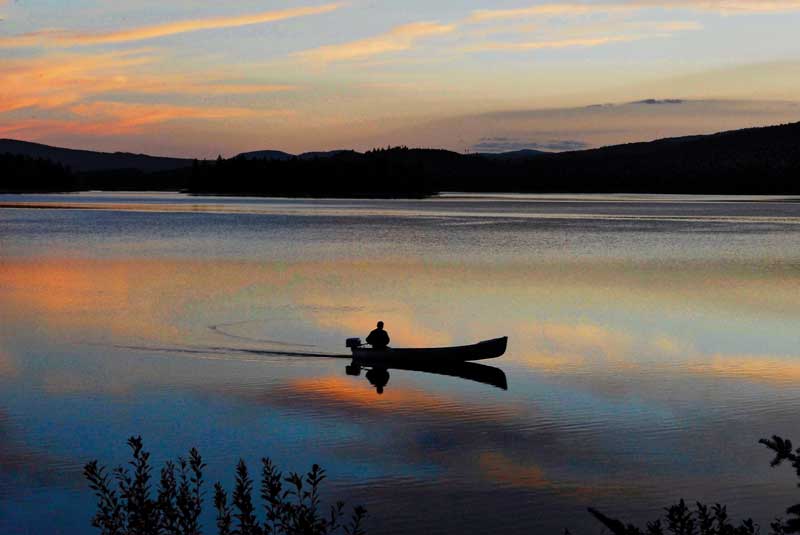 Returning to camp after a day on the water.

It’s been nearly 40 years since my wife and I first drove up a dirt-and-gravel logging road with more twists, turns, bumps, and grinds than a dancer in a carnival sideshow. The road slipped across Maine’s border into New Hampshire before sliding back again as it followed the western shoreline of Aziscohos Lake.

Trish was in her mid 20s. Me, a year shy of 30. Having driven from our homes in New Jersey, where ponds are called lakes and hiking trails are conveniently marked, we were unprepared for the vastness of the forest that appeared as wild and unrestrained as the moose that broke through the surrounding balsam and spruce to cross the road.

A few years after our first visit, we purchased a camp on the lake. Under the branches of an ancient spruce tree we discovered a square-stern canoe the owners had left behind. After shaking off pine needles and scraping off moss that had gathered along its sides, we turned over the aluminum hull and wiped away cobwebs from the thwarts and mouse droppings from under the seats before lifting the boat off two logs that had sunk into the soil over the years.

Manufactured by the Grumman Corporation, the 15'4" boat has three seats welded into the hull—one in the bow, another amidships, and a third at the stern. Although it can be paddled, we found it easier to row, the owners having left behind two heavy oars bolted to a set of oarlocks that slip into sockets set in front and behind the middle seat. In a lean-to behind the cabin, we found an ancient four-horsepower Evinrude outboard engine.

Trish had spent her childhood summers on Conway Lake across the border in New Hampshire, where she rowed a wooden peapod while her father cast metal lures and wooden plugs to largemouth bass and sharp-toothed pickerel. His friends would rib him, saying they wished their daughters were as well trained, but it was the graceful movement of that old wooden boat and the rhythm of those ash oars that captured the fancy of my future wife. So, it wasn’t long before she manned the oars on the Grumman while I trolled a streamer off its stern.

Over the years, we traded in the old Evinrude for a Johnson, and recently retired the two-stroke engine for a brandy-new, four-stroke Honda that doesn’t require oil to be mixed with gas and purrs instead of thunders. Since that first afternoon nearly 40 years ago, we’ve motored the Grumman up and down the lake while sometimes paddling, more often rowing up the river that winds through marsh and forest.

Each year, the ice breaks up in early May, leaving the lake’s big fish frisky. Although lilacs and forsythia may be blooming across southern New England, the beginning of spring can quickly revert back to winter in western Maine where the aspens and paper birch have yet to sprout a leaf. The year after our daughter was born, our happy little troop climbed into the newly-acquired Grumman. We slipped Emily Rose amidships, tucked in beside Buck, our black Lab, and a large canvas pack. With my wife in the bow, I steered the outboard from the stern. As the Grumman powered through heavy waves that had been building throughout that morning, Trish and I let our lines out from either side of the sturdy craft.

Landlocked salmon appear to revel in bad weather, the nastier, the more active they become, or so it seems. As the sky turned ashen, the fish took notice of our colorful streamers. At some point during the morning, a salmon hit the Mickey Finn pattern knotted to my line. As the fish erupted through the turbulent surface, Trish’s rod also bent forward. By then, clouds had closed in upon us and sleet turned to snow. Never one to quit, my wife held her fly rod in one hand while leaning over the dog to open the canvas pack with the other. Sliding out a plastic bag, she tore open a hole in the end, placed the bag over our daughter’s head, and slipped it over her snow suit, all the while playing the fish that rose through the angry waves to dance a jig across the lake’s surface.

I recall another afternoon, this one in late September. With the outboard cocked upward, we paddled up the Magalloway River. Our daughter, by then six or seven, was once again sitting between Trish in the bow and me in the stern. Emily had draped her arm around our big lab Buck. We’d often seen moose along the shoreline. Now, floating around a bend in the narrow river, we encountered a massive bull standing in the middle of the stream. While I performed a reverse stroke, a menacing growl emanated from deep within our dog’s chest. Preferring not to challenge a male moose during rutting season, I threw a boat cushion toward the Lab’s head before his growl could develop into a full-fledged bark. But the bull had no intention of abandoning the tasty greens that were waving in the current and we were able to paddle back around the bend to wait him out. 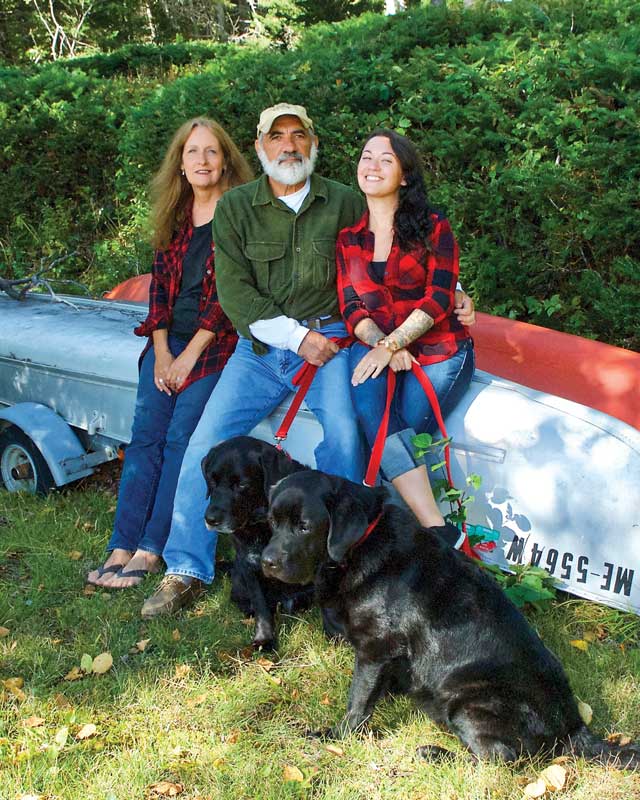 The author with his wife, Trish, daughter, Emily Rose, and their two black Labs, Winslow Homer and Finnegan. A few years later, my wife and I left our daughter in the care of her grandparents while setting out in the Grumman to see what we could see. It was a warm summer’s morning, and Trish had packed a lunch in anticipation of spreading our beach towels on the sandy shoreline of a small island a few miles down the lake. All was going well until she pointed toward the northeast. I turned to find the sky had turned gunmetal gray. Within 20 minutes, the lake was cast in shadow. Soon, rain was falling, the winds swirling around the Grumman while waves splashed over its sides.

Notwithstanding the squall that had caught up with us, we felt safe in the aluminum craft that I’d motored into the wind. It wasn’t until the rain turned to hail that we felt the need to head toward the closest shoreline. Buck, who had accompanied us, sought shelter among the beach towels, raising his head in my direction as if to say, “I’m getting too old for this sort of thing.”

Once on shore, I unscrewed the outboard and set it upon a boulder. With the Grumman tipped to one side, we were shielded from the wind and the dime-sized pellets that now pinged against the boat’s aluminum hull. Twenty minutes later, the hail abated. Soon, the winds slowed down. Not long afterward, the dog’s barks echoed off the spruce-studded hills while we celebrated the return of the sun by dancing around the square-stern canoe like a trio of ancient druids.

Mike Yates, the owner of the sporting lodge a short boat ride from our cabin, often jokes that I can afford to purchase a “real” boat—one with a cabin to provide shelter from storms and enough horsepower to zip up and down the 13-mile lake. Although I’m tempted, the Grumman has stood the test of time. Under blue skies and dark, whether over sun-streaked ripples or through storm-driven waves, it has gotten us there and back again. 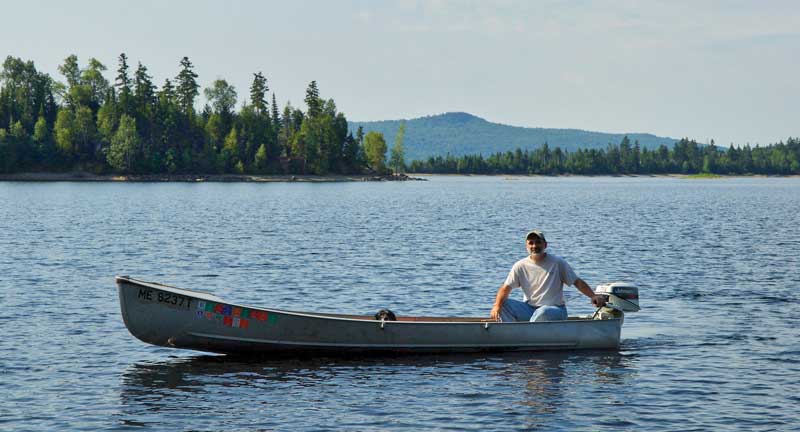 Making ready for a summer’s day—Robert, with Winslow peeking over the Grumman’s gunwale.

Buck is long gone. Our daughter, now the creative director for a major advertising agency, resides in Texas—too far away for frequent trips to Maine. Nevertheless, come this May, not long after the ice has receded from the lake, Winslow Homer and Finnegan, the two Labs who currently share our home, will race out the cabin door, with Trish and I tramping behind them. Shaking off the pine needles from the Grumman’s hull, we’ll remove the cobwebs from its corners and carry the aluminum boat down to the edge of the lake. There, I’ll screw the outboard to its transom, and lay the oars and life preservers on one side, the fly rods along the other, making ready for our next adventure.

Robert J. Romano Jr.’s most recent book, River Flowers, is a collection of short stories and fishing tales set in the North Woods of Maine, accompanied by watercolors painted by Emily Rose Romano. Email magalloway@mac.com for details about purchasing an autographed copy.