By Rob McCall
“Summer is the time when one sheds one’s tensions with one’s clothes, and the right kind of day is jeweled balm for the battered spirit. A few of those days and you can become drunk with the belief that all’s right with the world.”  —From Ada Louise Huxtable, 1921-2013

Summer is slipping in and surrounding us. Warm and humid air comes in on a South wind bringing foggy mornings and hot, muggy afternoons. Then, thunder showers pound down under towering clouds from the North, cooling the earth and giving it a drink. Wild flowers nod lazily in the breeze and trees show the undersides of their leaves as the showers move in. Everything is green and lush, like a touch of Ireland in Maine on these early summer days. Birds are quieter now as they busily tend their nests and feed their hatchlings. Deer graze happily in their shiny new summer coats. For those of us who winter over here, it is not just another season. It is more like a different planet we inhabit these days. The hardships of winter fade in our memories as we look around in wonder, and walk barefoot in the garden.

We are seeing a turning point in the growing season as more and more plants turn their energy from leaf to seed. For the most part, they devote the early weeks of the season to growing new leaves and stems, but once the bloom emerges, it’s all about producing seeds for the future. For us, flowers are about our own pleasure and enjoyment in the present as we marvel at their beautiful shapes and colors and aromas. But for the plants, flowers are all about survival into the next generation, ensuring that more of each kind will flourish next year and in years to come. How mysterious and holy Nature is!

Most enticing this week are the native strawberries. There is nothing that compares to a cold dish of strawberries with a large dripping scoop of vanilla ice cream on a hot July day. 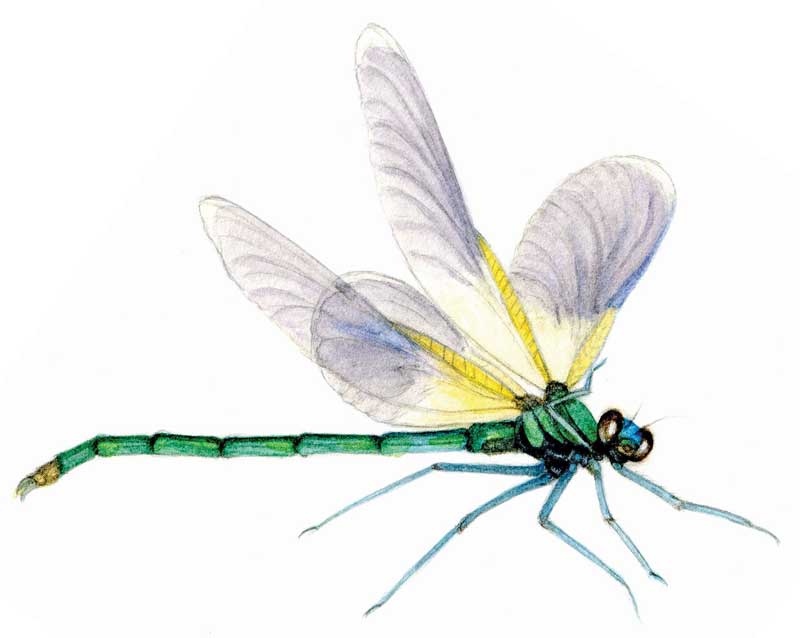 Rising above the daisies and the timothy grass are the Corinthian stalks, filigreed leaves and lavender-tinged white florets of Valerian officianalis, sometimes called “heliotrope” around here. Its beguiling odor has the power to transport us beyond time and place into a halcyon state of grace. This is not just wild imagination, because Valerian has been a well-known herbal remedy for anxiety and insomnia since ancient times. One chemical derivative is Valium. Meanwhile above, the air zips with dragonflies recently emerged, and sightings of tiger swallowtail and Monarch butterflies.

With the weather and the water warming, pleasure boats begin to appear as if from nowhere. Living, as we do, way downeast in Brooklin, which calls itself the “boatbuilding capital of the world,” we see more beautiful, hand-crafted wooden boats than we ever could have imagined emerging from their long winter’s naps in barns, boathouses, shops and garages, then riding along the roads, and then sliding into the waves: a sight to behold!

Near the summit of Awanadjo—Blue Hill Mountain—is a tiny spruce tree about waist high that has grown no bigger since I first saw it there almost 30 years ago. It is rooted in a crack in the ledge where soil and moisture are sparse. It is a natural bonsai, as the Japanese would call it. Not far from this tiny tree other spruces and firs may add six or eight or ten inches to their height and breadth every year as they reach up for the sky and out toward each other, but this small one does not. It remains small. If a part of it shows new green growth, another part of it turns brown and dies. Still it lives and grows and makes seeds for another year.

As the Dog Days fade away and we reach astronomical mid-summer, the heat and humidity ease a bit, evening comes earlier, and nights are better for sleeping. Most birds have left the nest and we smile to see fledglings trying out their new wings and learning the ways of the flock. There is a squad of young crows around our Moose Island field station and we are endlessly amused at their adolescent antics: squawking, pushing, jumping, twirling, brimming with youthful energy like the young of any species. White-tail fawns are teetering about on their fast-growing legs and young bucks are going head-to-head trying out velvety new antlers.

The great salt marsh (named Kci-Peskiyak in Passamaquoddy) where the Passamaquoddy people have gathered sweet grass for centuries, lies between Passamaquoddy Bay and Cobscook Bay along the Sipayik Trail which we hiked this past week, much to our delight. High summer adorns the trail with abundant common wildflowers like daisy, buttercup, rambling rose, fireweed and wild lettuce. Dominating the bloom now is tall meadow-rue, also called king-of-the-meadow, which can grow shoulder high with feathery white blossoms and oval or paw-shaped bi-pinnate leaves. Sweet grass is identified by its satiny yellow-green leaves and beguiling vanilla-like aroma, and is used for ceremony, basket-making, home decoration and the like.

Schools of blue striped Atlantic mackerel are running again and the pier is lined with eager fishermen, women and children hoping to hook this sleek and beautiful swimmer, one of the easiest fish to catch and very healthy to eat. They are high in vitamin B12 and omega 3 fatty acids and very low in mercury. They are also a beautiful fish with sparkling silver and blue sides, graceful shape and large lucid eyes.

Roadsides are abloom with the fluffy, fuzzy, rose-pink flowers of rabbit’s foot clover, Trifolium arvense, which loves dry sandy places and, like other legumes, improves the soil in which it is rooted by fixing nitrogen from the air into the dirt, and thus helps other plants move in. A good neighbor, for sure, and cute. Clovers with white, purple, pink, and yellow blossoms appear every summer, too. Clovers are immigrants from Europe and Asia and their benefits are great. In addition to improving soil, they are irresistible to bees and make excellent silage, fodder, and pasture for livestock. When I was a lad, we loved to pull out the petals of purple clover and suck out the sweet nectar. I can still taste it on my tongue.

Nearby, we can see a compact shrub with pink or white flowers called
meadowsweet. It is a wild cousin to spirea, which grows in many a garden. Meadowsweet may have tall white blossom stalks or shorter salmon-colored clusters and is abundant along roadsides and the margins of fields.

If your house is troubled by evil spirits, you might want to consider the mountain ash, Sorbus americana, also called “Rowan” or “Rowan tree.” A small tree 10-30' tall with compound leaves and clusters of white flowers that turn to red-orange berries in late summer, it grows throughout Maine and the Maritimes, as far West as Minnesota and as far South as the mountains of Georgia. The leaves are fodder for deer and moose, and the red berries are food for birds, squirrels and field mice.

Some say that the cooked berries are good for various ailments, being high in vitamin C and antioxidants, and make a delicious marmalade. With that in mind, your commentator did some field testing, going out to a rocky cliff on Moose Island where a number of small Rowan trees are holding on for dear life, and there picking some berries. They grow in clusters of a deep red-orange with 50 or more berries. They look like a tiny apple—to which they are distantly related—deeply colored where the sun hits them and green on their shady side, with a five-pointed star on the bottom of each berry. The pulpy, green flesh was surprisingly juicy given the lack of rain and, yes, it was bitter, but with a hint of spice. It is not hard to see why flocks of Cedar Wax-wings will descend upon these mythical trees and whisper gleefully to each other while enjoying the richly flavored fruit.

In former days in Europe and the British Isles, rowan twigs lashed with red string into the shape of a cross made a charm to repel evil spirits and prevent enchantment. A rowan wood walking staff had the same effect, or planting a rowan tree in the dooryard. Livestock, too, was thought to benefit by a rowan sprig on their byre. These customs date back to very ancient times. Magic qualities aside, I have found the wood useful for fashioning light and strong hiking sticks and for making coat-hooks. So that is Rowan tree, or Mountain Ash.

This is molting season for adult avians, the time when old feathers are replaced by new, usually after brooding and while food is still abundant. There is an immensely complicated structure of even the simplest feather. Not only do they have a stem and veins like a leaf, but each vein has feathery edges, too, so that they lock together in flight. On owls the leading edges of the wing feathers are soft and downy allowing them to fly in silence. Ducks and sea birds have an oil gland which helps them groom their feathers so water rolls off like a duck’s back.

While adult birds are shedding, the young are fledging. We’ve been watching a crow’s nest in the big sugar maple behind the town hall for a couple of months now; the adults faithfully feeding their fledglings for weeks on end. Then, the end of their labors drew near; it was time for flying lessons in the orchard. Awkward, squawking youngsters bumbled about trying out their new feathers, still white at the base. Flapping frantically they careened from the oak tree into the branches of a lilac bush, then blundered into an apple tree groaning and griping but obviously elated, while the parents cawed their encouragement.

Meanwhile, down behind the dam on the mill brook, fledgling mallards paddled along behind their mothers preening and looking over their shoulders admiring their fluffy new coats.

From Richard Jeffries, English naturalist, 1848-1887: “Not only the days, but life itself lengthens in summer. I would spread abroad my arms and gather more of it to me, could I do so.”

Rob McCall splits his time between Moose Island and Brooklin, Maine. This almanack is excerpted from his weekly radio show on WERU FM and streamed live on weru.org.