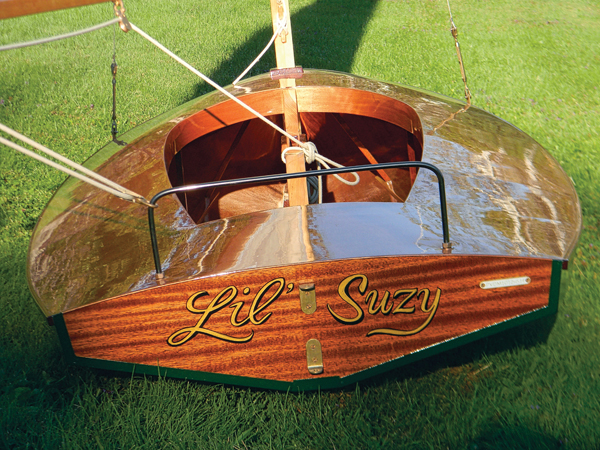 Photos by Sandy Dolan. This pair of wooden Moths will be sailed on Valhalla Lake in New York State.

In October 2014, Cottrell Boatbuilding of Searsport, Maine, delivered a pair of custom-designed and -built classic Moths to a customer in Cold Spring, New York. The customer, New York-based architect Joseph Pell Lombardi, had raced Moths in his younger days. His charge to the Cottrells—Dale, his wife Lynn, and his son Seth—was: “Design and build me two beautiful, identical Moths within the classic Moth rules.” Named Lil’ Suzy and Lil’ Suzy Too, the two Moths were delivered to Lombardi last fall. He has no intention of racing them in classic Moth fleets, but he does want to race the two against each other at his home on Valhalla Lake in the historic planned community of Valhalla Highlands, which dates back to the 1930s. Lombardi, who specializes in historic preservation, has been building a rustic lodge there. Since the lake is smaller than many other traditional Moth racing venues, Lombardi wanted these Moths to be a little smaller as well, Lynn Cottrell said. So Dale Cottrell designed the pair with some degree of latitude: While the most competitive classic Moths are constructed with 1/8" plywood, for example, Dale opted for 1/4" in the hull and 1/8" on the deck. He estimated that this increased the hull weights slightly above the class minimum of 75 pounds, but made the hulls more durable. 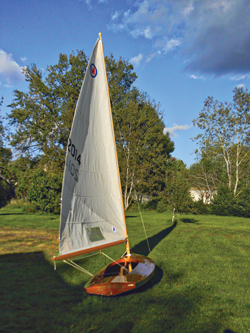 The Moth class is a development class, which means it is open to any designs that fit certain base parameters. The class measurement rules, which have only been slightly modified since 1969, are: maximum length overall of 11', maximum beam of 5', and—as mentioned above—minimum hull weight of 75 pounds. Maximum sail area is 72 square feet. The Cottrell Moths measure 11' length overall with a beam of 4'1". The sail area is 72 square feet. The sails were made by Bayview Rigging and Sails in Yarmouth, Maine, and the custom hardware by J.M. Reineck & Son in Hull, Massachusetts. Dale Cottrell grew up on the New Jersey shore, where he raced Penguin class sailboats and surfed. He moved to Maine in 1969 and built canoes at Rivers & Gilman in Hampden. A stint building dinghies for Plastic Pete in Blue Hill inspired Dale to design his own fiberglass dinghy, which he called the Puffin. He co-founded the Winterport Boat Company with Lynn, and made thousands of Puffins before bowing out of the company after 10 years to go back to his true love: building wooden boats.

The Cottrells now specialize in small wooden boats, both traditional plank-on-frame and glued lapstrake. Dale, Lynn, and Seth build about a dozen boats a year. The first Moth was designed and built by Joel Van Sant in Elizabeth City, North Carolina, in 1929. Today there are active classic Moth fleets along the East Coast from Florida to Maine. I first became interested in Moths at the annual Wooden Open One-Design Regattas, held at that time at the Rock Hall Yacht Club in Maryland, where a group of six to eight of them regularly participated. I loved how the owners talked about their different boats with such passion and affection. This past winter, I plunged in and bought two for myself. What fun, I thought, to have two different Moth designs, and to race them against each other. One is a Mint, and the other, a Ventnor. Alas, the two boats didn’t arrive here until the fall, just in time to be put away for the winter. I’ll let you know how it goes when I get them on the water next spring. Carl Cramer is the former publisher of WoodenBoat and Professional BoatBuilder magazines. He is now pursuing other endeavors. For more information about classic Moths: www.mothboat.com