By Peter Bass
Illustrations by Ted Walsh As I wrote this in November, Maine received its first snowfall. Some places received quite a lot of the heavy and sticky variety (15-plus inches in the Midcoast), which put more than 100,000 Mainers out of power right before election day. The governor issued a proclamation to allow utility workers to vote remotely as they worked to restore power. Could that make them an electrified electorate? I recently worked at a boat show and struck up a conversation with a visitor to the booth. We introduced ourselves and he asked how it was that my name sounded familiar. I mentioned my greatest literary accomplishment, writing for Maine Boats, Homes & Harbors, and voilà, I discovered I had a second reader. Actually, I have three; I gave my grandson a subscription and he claims to read this column, as well as looking at the boats. 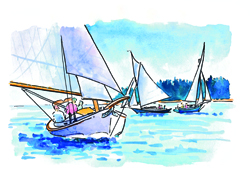 Illustration by Ted Walsh
Lasting Friendships If you doodled pictures of sailboats as a child in Maine, probably the Friendship sloop was one. It was a Maine coast icon. When I first summered in Boothbay Harbor there were a number about, the best-known being Roger Duncan’s Eastward, which he would thread through the back entrance to Newagen Harbor under sail, a tricky bit of handling in any boat. The family boat of one of my fellow wharf rats (and current porch regular) was a small Friendship named Content, which his family took to the town of Friendship for the annual Friendship Sloop Society get-together and races. Content was remarkably unsuccessful on the racecourse; as I recall, it sailed better on one tack than on the other. It was nice to learn of the publication of a new history of the boats, called Lasting Friendships, A Century of Friendship Sloops. Authored by the eminent boatbuilder Ralph Stanley, writer/illustrator T.B.R. Walsh, and members of the Friendship Sloop Society, it is both a history and a catalog of existing sloops, with photographs and line drawings. The hardcover is available from the society (fss.org) and the paperback from the usual suspects. By the way, Mr. Walsh, a.k.a. Ted, illustrates this column and is probably the real reason my grandson reads it; he wants to know the stories behind the illustrations. Safety first Yarmouth had the distinct honor to be included on the “safest places to live in Maine” list, according to a study widely reported around the state. The way I read the statistics, it looks like the town, which was my home from 1984 to 2011, is the safest place to live in the state. During my time in there, I belonged to the Yarmouth Lions Club, and had the pleasure of knowing Chief of Police Dick Perry, a real professional and fine guy all around. I, of course, give Dick all the credit for the safety ranking, although he has been retired for some time. The former weekly newspaper, the progressive The Maine Times, used to run an annual survey for the best of this and that in Maine. One of the questions concerned the most likely place to get a speeding ticket. Yarmouth nearly always won, and I can support that. I have gotten just one speeding ticket in nearly 50 years of driving and it was in Yarmouth. This is not to say I shouldn’t have gotten other tickets, but Chief Perry’s department took the honor. My payback came when my wife at the time and I shared a table with Dick and his wife at the Yarmouth Middle School Players’ murder mystery dinner, and I alone solved the whodunit. It was a Pyrrhic victory, given the speeding fine. Progressive weeklies One thing I like to do is read my local daily newspaper, the emphasis on “read” and “paper.” I grew up with the Lewiston Daily Sun, now the Sun Journal. When I lived downeast, it was the Bangor Daily News. Later the Portland Press Herald chronicled the news in my southern Maine years. But what really made life fun was the weeklies, many of which survive. The really fun ones were the progressive weeklies, in particular The Maine Times, which could be exhilarating or confounding, depending on your state in life and your current political views. I drop in on one of my previous weeklies, The (Falmouth) Forecaster, from time to time via non-paper media. One reason is to read Edgar Allen Beem, one of Maine’s great and enduring journalists and veteran of several alternative progressive weeklies including The Maine Times. Mr. Beem, who will soon celebrate a half-century in print, wrote a poignant column recently about the demise of alternative weeklies and print journalism in general. His column appeared in late October, and is worth trying to find. It begins, “When people ask me what I’m up to these days, I sometimes answer, only half facetiously, “I’m trying not to outlive print journalism, but it could happen.” 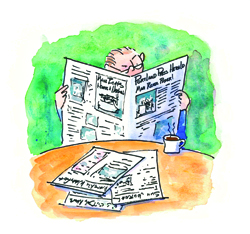 Contributing Editor Peter Bass is sniffing his way through the winter cocktail circuit. He may be in jail by the time you read this, though not for speeding. To submit your comments... newsy tidbits, photos, illustrations, clippings, rants, and raves for possible use in this column, use the form below. Or mail to “View From the Porch,” P.O. Box 566, Rockland, ME 04841 or fax to 207-593-0026. Items may be edited for length and clarity; materials become the property of Maine Boats, Homes & Harbors, Inc.