Echo Lake is a great pond in more ways than one

In 1999, my wife and I found a piece of land a hop, skip, and a jump from the northern end of Echo Lake and had a house built there to hold our family, which featured daughter Emily, son James, and Cedar Sox, the cat (Buster, the Springer spaniel, joined us shortly thereafter). 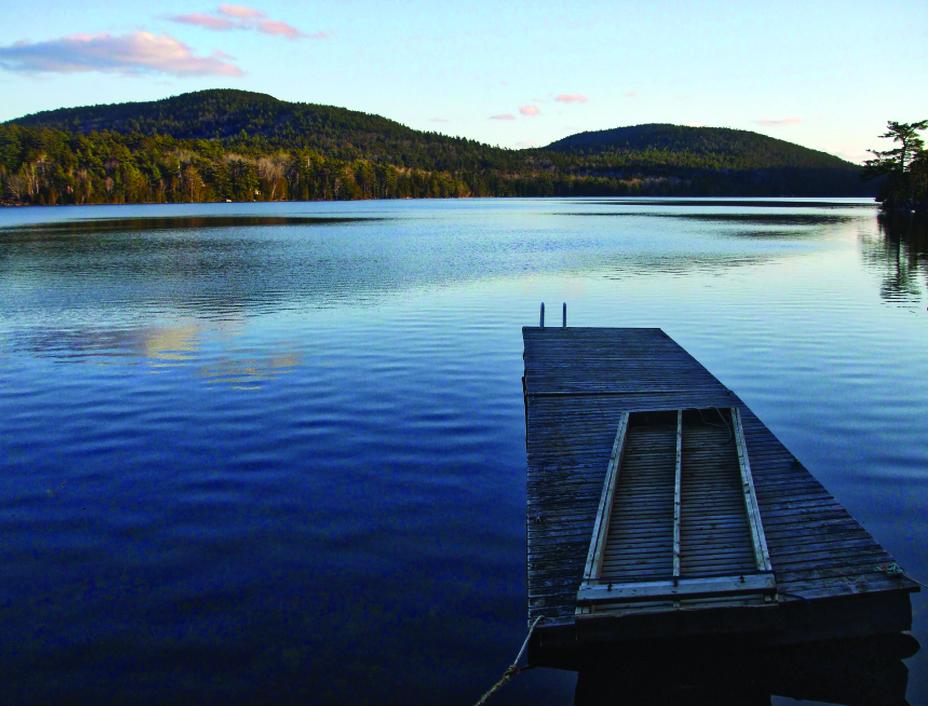 Echo Lake from the northern end, looking toward Acadia Mountain and Southwest Harbor. Photo by Carl Little Echo is one of 14 great ponds within or adjacent to Acadia National Park. This designation, applied to lakes and ponds in Maine that are greater than 10 acres in size, carries certain regulations, including a prohibition on motors of more than 10 horsepower.

The lake, which lies south of Somesville and north of Southwest Harbor, is bordered on the east by Route 102. In the summer, that stretch is busy: people park to hike a number of trails, including the popular Acadia Mountain, and to swim at the Echo Lake Ledges, rock outcroppings that offer a natural platform for diving into the cool depths (the lake’s maximum water depth is
66 feet).

This side of the lake is also home to the Echo Lake Club, a favorite seasonal retreat for visitors and locals alike, that was established in 1925 by the Appalachian Mountain Club. Students from island elementary schools have sleepovers there in the fall to learn about nature (I helped chaperone one year).

The park maintains Echo Lake Beach at the southern end. We took our children there when they were little, and now take the granddaughters, as it is shallow and a perfect place for little ones to become comfortable in the water. The beach lies beneath Beech Cliff, a dramatic prospect both from above and below.

The western shore is all trees, except for a handful of camps and a clutch of docks that serve as the waterfront campus for Beech Cliff Camp. Our neighbor, a seasoned rower, recently located two 4-oar shells that will form the beginning of a local rowing group at the camp this summer.

Daughter Emily, who was a counselor there for four summers, describes one of her best memories of Echo as kayaking to the middle of the lake with a friend, “accidentally” flipping the boat, and then barely getting it back to shore because they were laughing so hard. “There was a feeling of privacy in the middle of the lake, a place where we could tell all our teenage secrets,” she recalled.

Son James’s memory also involves a kayak. Some geographic context is required here. Looking out at the lake from our dock, there is a small scraggly island, to the right of which is a narrow channel with submerged rocks. Once, maneuvering a kayak between two of the larger rocks, James dubbed them Scylla and Charybdis. “Choosing between two evils: a whirlpool or a six-headed monster”—that’s the way he imagined this passage. Sherry Geyelin, a master storyteller, had been teaching the Greek myths to his class at Mount Desert Elementary School, and he found a vivid way to conjure one of them on Echo Lake. 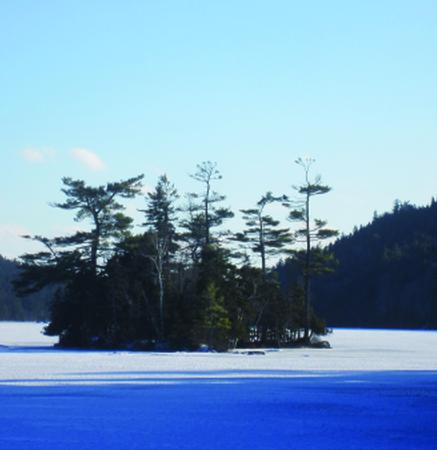 Photo by Carl Little My wife, Peggy, also offered a story related to boats. On more than one occasion, she noted, a kayak or canoe has come unhitched from our Lakeside Association’s dock and floated away, sometimes ending up at the other end of the lake. They are eventually returned, our name and phone number on the hull leading the good Samaritan to our door.

Over the years the lake has inspired a few poems. One involves snorkeling alongside Buster, the aforementioned springer. A marvelous swimmer, he would follow us as we canoed the length of the lake, half in the water, half in the trees.

There’s not much to see with a mask and snorkel, by the way. I encountered a good-sized eel once, and the spiraling umbilical cords of lily pads are stunning, but that’s about it.

Another poem plays off the lake’s name, which does indeed feature an echo. Riffing on something the poet Stanley Kunitz, one of my writing professors at Columbia, once said in an interview, this verse [see sidebar] uses the setting as a means to profess love, bravely.

With Acadia National Park turning 100 this year, my family owes a special debt to the founders who sought to protect this special body of water with its loons and kingfishers, its ice skating and fishing in the winter, and snapping turtles sunning on rocks in the summer. Long may this lake be great.

In addition to writing extensively about Maine art and artists, Carl Little is the author of two poetry collections.

The Echo
“I love the sound. Brave. It echoes love.”
—Stanley Kunitz

How brave it is to love,
to love is to be brave,

brave love, I love you.
Are you brave enough

to love me in return?
Ah, love, let us be brave

with one another.
We call out “love”

over the water.
“Courage, mon vieux,”

be brave, old friend,
my love, my lover,

A Letter from the Publisher - Issue 132

A Letter from the Publisher - Issue 100