Welcome Downeast: The Towns, the Bays, the Mountains

"In August... there's a few days somewhere about the middle of the month when suddenly there's a foretaste of fall, it's cool, there's a lambence, a soft, a luminous quality to the light as though it came, not just from today, but from old classic times." —William Faulkner Dear Friends: Many an August morning we awaken in thick fog. Sometimes it stands still, sometimes it floats over island and inlet, house and hill, giving the whole landscape an air of enchantment. By breakfast time, the fog has retreated out over the water to wait out the day until it can creep in again and embrace us with its misty damp. Field and forest report, August

Illustration by Candice Hutchinson
The late summer crop of mushrooms is springing up all around. These various and colorful fruiting bodies that rise above the ground, like a scene from Fantasia, are the flowers of the fungus which grows unseen underground. Some claim that the largest living creature on earth is a golden mushroom, Amillaria ostoyae, in the Malheur National Forest in Eastern Oregon, which reportedly covers more than 2,200 acres. It is of a type that is parasitic and may kill host plants, including Douglas fir, but many mycorrhizal fungi are symbiotic and beneficial to their hosts. They intermingle and greatly extend the root systems of the host and help it absorb moisture and metabolize minerals that the plants alone could not. The fungi, in turn, absorb carbohydrates they need from the plants with which they are partnered. Natural events Heavy and muggy has been replaced by lighter and cooler, making for better sleeping right through until the everlater sunrise. Older and weaker maple trees are turning color and even beginning to lose their leaves while apples are starting to show new rosy cheeks. The round yellow buttons of tansy line roadsides and common mullein and evening primrose are coming into bloom, as are the long nodding stalks of goldenrod and the lacy leaves and tiny green flowers of ragweed. Saltwater report As summer begins to dwindle and the air gets cooler, the water gets warmer. Notice I didn't say "warm." The exhilarating thrill of a dip in the Gulf of Maine is not soon forgotten, but it is also not for everyone. First there is the slow wade out into the water as you bounce on the tip of your toes and your breath comes in short pants punctuated with O-o-o-o-os and A-a-a-a-ahs while the feet and legs gradually lose all feeling. Then there is the passing of that critical point where the water reaches your midsection and, hey, why not just dive in? Then there is the plunge, a few missed heart-beats, and the breeching and screeching out of the water dripping wet with a flush over the whole body and every little scratch and cut stinging and burning with the salt. Hoo boy! Nothing can beat that. That's when you really know you are alive. Field and forest report, September Ripe, red tomatoes, pink-cheeked peaches, glistening blackberries, and shining apples greet us at farmer's markets, thanks to the good work of local growers with dirt under the fingernails, eyes on the weather, and songs in their hearts. Wild apples fall softly along the hedgerows and stonewalls, a cidery feast for field mice, chipmunks, raccoons, deer, bears, and hornets. Beechnuts and acorns provide a special bounty for the black bears fattening before hibernating. Saltwater report Mackerel fishing continues, but is winding down. When mackerel are running they are a little like zucchini—so plentiful that if you leave your car windows rolled down you may find a bucket of mackerel on the front seat when you return. They are a beautiful fish, with flanks sleek and glowing, but slowly fading as the light of life goes out of their eyes. Natural events, late September 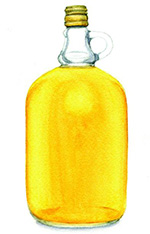 Illustration by Candice Hutchinson
It's still apple picking time in Maine orchards. Some of the earlier varieties are gone but later varieties are still to be picked. Many orchards have "pick-yourown" trees for the adventurous. The rest are picked largely by migrant workers from the Caribbean or south of the border. They do much of the hard work that brings shining apples and rich golden cider to our tables at this season. Apple picking is a delicate art; they must be handled carefully. Saltwater report As the waters cool along the coast, lobstermen are hauling their traps out of the water for another season. Lobstering is a tough business with high costs for boats, fuel, and equipment, and complicated regulations necessary to protect the fisheries. But it has its pleasures too: going out at the crack of dawn in the quiet, watching the sun rise over the water, getting to know the sea like a loved one, being your own boss, and all the lobsters you can eat. Rant opinion My brother and sister-in-law (like me) are getting to that age when you think things used to be a lot better than they are today and that we are all going somewhere in a hand-basket. The natural thing to do is to rant about it, but that can get tedious for your family because they have heard it all before. So they have developed a system whereby instead of doing the whole rant, they give each one a number and when something ticks them off, they just call out the number and save a lot of breath and boredom. You and I might be getting into that situation too, come to think of it, because I've been doing this column for 23 years and I am pretty sure I have delivered this next rant more than once. Here goes: The apple business and the lobster business were once a whole lot simpler than they are now. Most of the gear could be made by hand off-season. The apple grower could get wood from the nearby box mill to make and repair his bushel boxes, helped by some hired locals over the winter. His ladders were made nearby. He sharpened his pruning saws himself. He grew his new stock in his own nursery. He concocted simple sprays. When picking time came, the locals would turn out to help with the harvest. Likewise, the lobsterman would go to the local trap mill to get the materials to make and repair his lobster traps in the off-season. He might even build and maintain his own boat with help from friends and family. Nowadays, everything is bigger and faster, or made in China, and the smaller or slower guy who wants to use local materials has been pushed out, and many have no work to keep them busy in winter and have to live on the dole. It is a doggoned shame! Just call that Rant Number 22. Natural events, October Red and orange are the colors of fall as the green chlorophyll, which does the work of photosynthesis all summer, fades to show the underlying yelloworange carotenids that were there all the time. Red anthocyanins are produced only in fall and only in certain plants and trees. Apples, raspberries, cranberries, rose hips, and the leaves of swamp maple, woodbine, and "burning bush" display brilliant reds this time of year, especially against a bright blue sky in late afternoon when the longer slanting rays of October light set them aglow, or under a red sky in the morning with a little frost on the ground when you can see your breath coming in clouds. Field and forest report Sipping on fallen pears, the mourning cloak butterfly Nymphalis Antiopa sucks up sweet antifreeze to fortify her through the coming cold, then flutters to a sunny spot and spreads her deep purple ivorytrimmed blue-spotted solar-panel wings to warm up. The hardy mourning cloak is the only adult butterfly that winters over in these parts, thus being the first to appear alive in early April to warm our winter-weary hearts. Yes, the flowers will freeze and turn brown, the crickets will stop their singing, the ladybugs and the bumblebees will die. For that we mourn. But shall we not also rejoice that life will inevitably return, the trees and fields will be green again, and the mourning cloak will cease her mourning to flutter up fairy-like and ecstatic in the spring sun? Seedpod to carry around with you 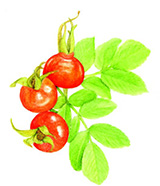 Illustration by Candice Hutchinson
From Edwin Way Teale: "On such October days as this we look about us as in some new and magic land. The mystical draws close behind the luminous veil... Looking back on such a time, we add, as Thoreau did, ‘And something more I saw which cannot easily be described.'"

That's the almanack for this time. But don't take it from us-we're no experts. Go out and see for yourself. Yr. mst. humble & obd'nt servant, Rob McCall Rob McCall lives way down east on Moose Island. This almanack is excerpted from his weekly radio show, which can be heard on WERU FM (89.9 in Blue Hill, 99.9 in Bangor) and streamed live via www.weru.org.

From Sail to Power