Unlocking the Past at Songo Lock

On a Sunday in late May when fog cloaked the sea, we drove inland in search of warmth and sunshine. We found both in the town of Naples, at the heart of Maine’s Lakes Region.

Standing on the Route 302 causeway separating Long Lake and Brandy Pond, we watched speedboats and pontoon boats etch the water’s surface, their swimsuit-clad passengers basking in the rays. It looked relaxing and inviting—and nothing like springtime boating on the coast. 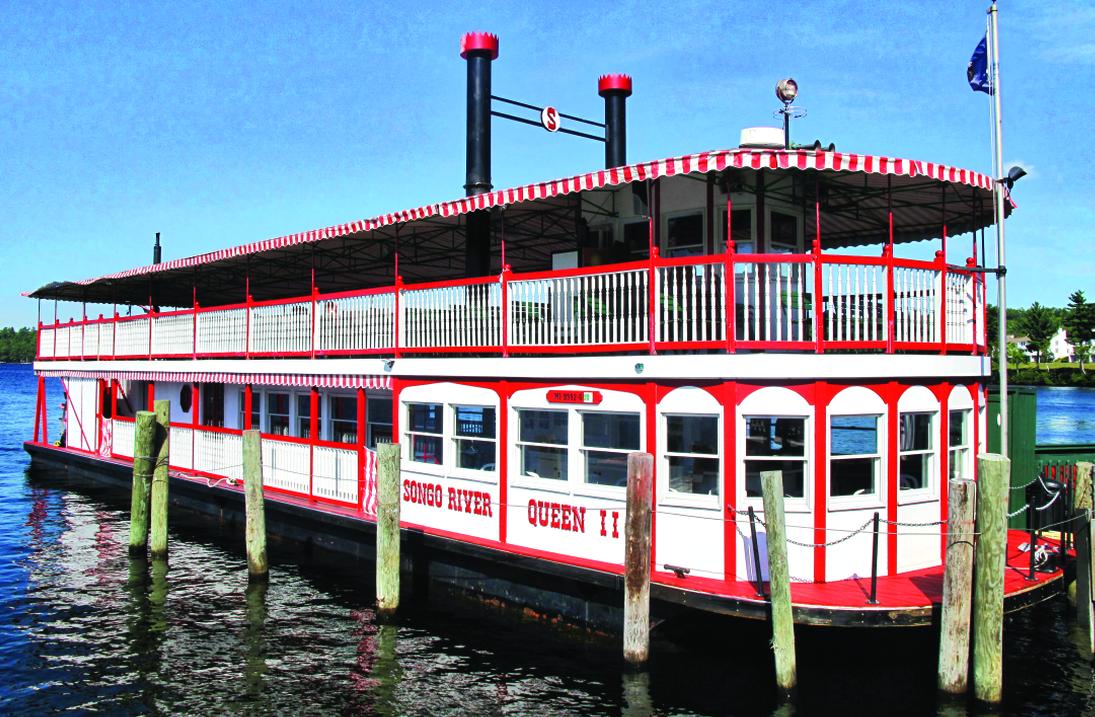 On the Long Lake side, the Songo River Queen II waited at her dock for the next cruise. An authentic, 93-foot-long replica of a Mississippi River paddle wheeler, she circumnavigates the lake, providing sightseers with White Mountain panoramas and views of luxury homes and historic camps. Until a few years ago, the Queen also headed down Brandy Pond, along the Songo River, and through the historic Songo Lock to Sebago Lake before retracing her route. But a fixed low-arched causeway built in 2012 to replace an old swing bridge trapped the double-decker vessel on Long Lake. 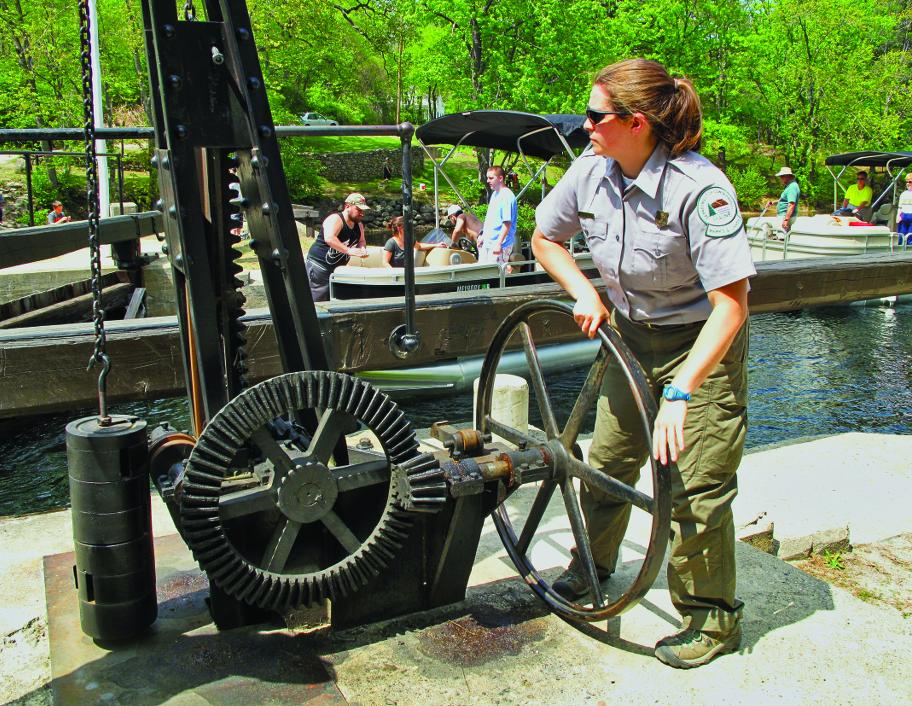 I wish I had taken that cruise before it was too late. I’d love to have glided along the Songo, a narrow ribbon of water whose serpentine course is the very definition of a meandering river. The highlight of the trip would have been slipping through a small, hand-turned swing bridge and into the historic, 100-by-25-foot Songo Lock, where the paddle wheeler fit like a shoe in a shoebox.

Located within Sebago Lake State Park a few miles from the causeway, the country’s last hand-operated lock is the only remaining one of 28 locks opened in 1830 as part of the Cumberland and Oxford Canal. The others were spaced along a hand-dug, 20-mile-long channel that linked the lower end of Sebago Lake with Portland Harbor. Opened just five years after the Erie Canal, the system created a continuous inland waterway for the transport of goods between the northern tip of Long Lake and the coast. 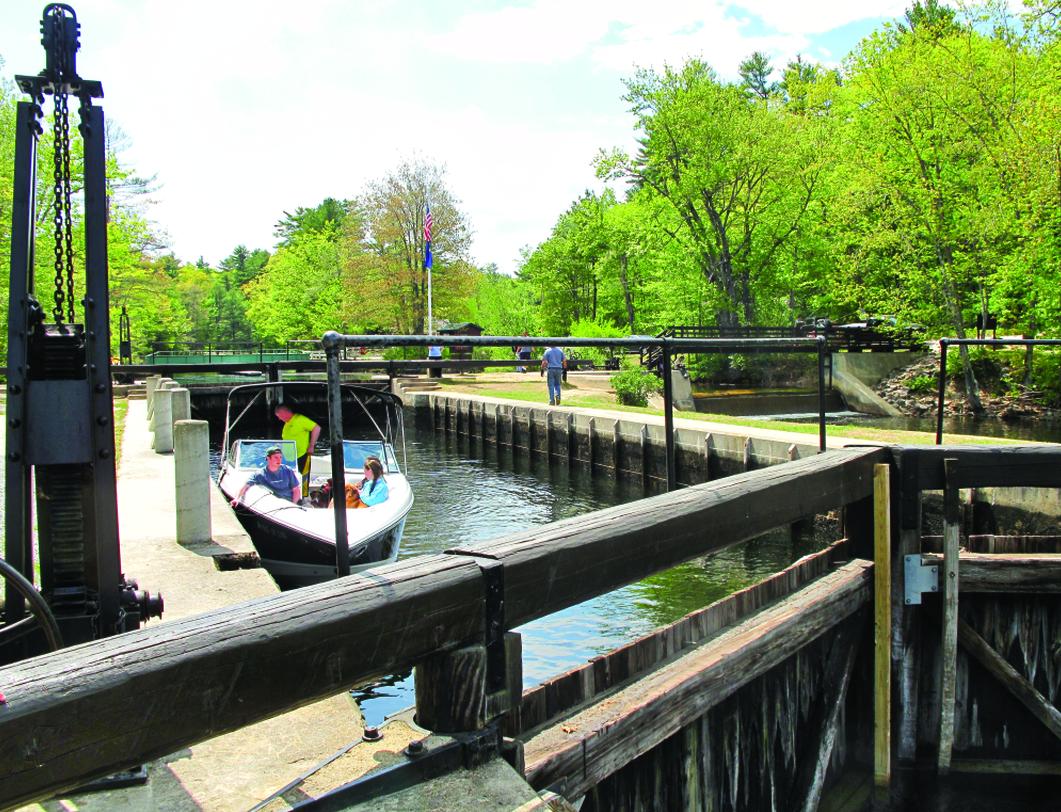 The lock was once part of an inland waterway used for the transport of commercial goods.

Sixty-five-foot-long, flat-bottomed, blunt-ended barges carried lumber, ships’ masts, barrels, and other materials from inland points to Portland; manufactured goods and foodstuffs traveled in the opposite direction.
Boatmen steered with long poles while horses or oxen pulled the vessels from a towpath parallel to the canal. Upon arrival in Sebago Lake, dual keels or centerboards were lowered; two short, hinged masts were raised; and gaff sails were hoisted. After sailing across the lake, the vessels were again poled into Songo Lock and along the Songo River, and then sailed up Brandy Pond and Long Lake.

“Nowhere such a devious stream,

Save in fancy or in dream,

Winding slow through bush and brake

Links together lake and lake.

Walled with woods or sandy shelf,

Ever doubling on itself

Flows the stream, so still and slow

That it hardly seems to flow.”

Toward the poem’s end, he offers advice that still rings true for visitors to the Lakes Region: “Traveller, hurrying from the heat of the city, stay thy feet! Rest awhile, nor longer waste life with inconsiderate haste!”

The arrival of the railroad foreshadowed an end to the waterborne cargo business. By the time Sebago Station opened in 1870, freight barges had disappeared. Passenger steamboats held on quite a bit longer, until the last one exited Songo Lock in 1932. These days, it’s small sportfishing boats, pontoon boats, and other pleasure craft that shuffle in and out of the lock, to the tune of some 4,700 vessels during the May-to-mid-October season. Without the lock, they would be unable to navigate the five-foot difference in water level between Brandy Pond and Sebago Lake.

It’s fascinating to watch Park Ranger Lauren Hillier open and close the large wooden gates by walking a beefy, horizontal beam back and forth. Once the lock is closed, she hand-turns a large wheel on cast-iron sluice gears to raise and lower the water. Hillier is the traffic cop, making sure boats enter and exit in an orderly fashion. She also is the toll collector: $15 going downstream (free going upstream). A Lakes Environmental Association representative also is on hand to inspect boats for milfoil and increase awareness of the invasive plant.

Hillier sees many local boats every weekend, but they’re occasionally joined by more unusual craft. “One of those car-boats from the 1960s came through one day,” Hillier recalled. And, she noted, large crane barges squeeze into the lock en route to dock-construction jobs. That would be an interesting sight, I thought. And then I started picturing one of the old canal barges entering the lock, its deck piled high with lumber. Now that would be an interesting sight indeed.

Departing from her dock at the Naples causeway, the paddle wheeler sails on weekends Memorial Day Weekend through June 26; and September 10 through October 10. Daily cruises are offered June 27 through Labor Day. One-hour cruises: adults $15; ages 4-12 $8; under 4 free. Two-hour cruises:
adults $25; ages 4-12 $13; under 4 free.