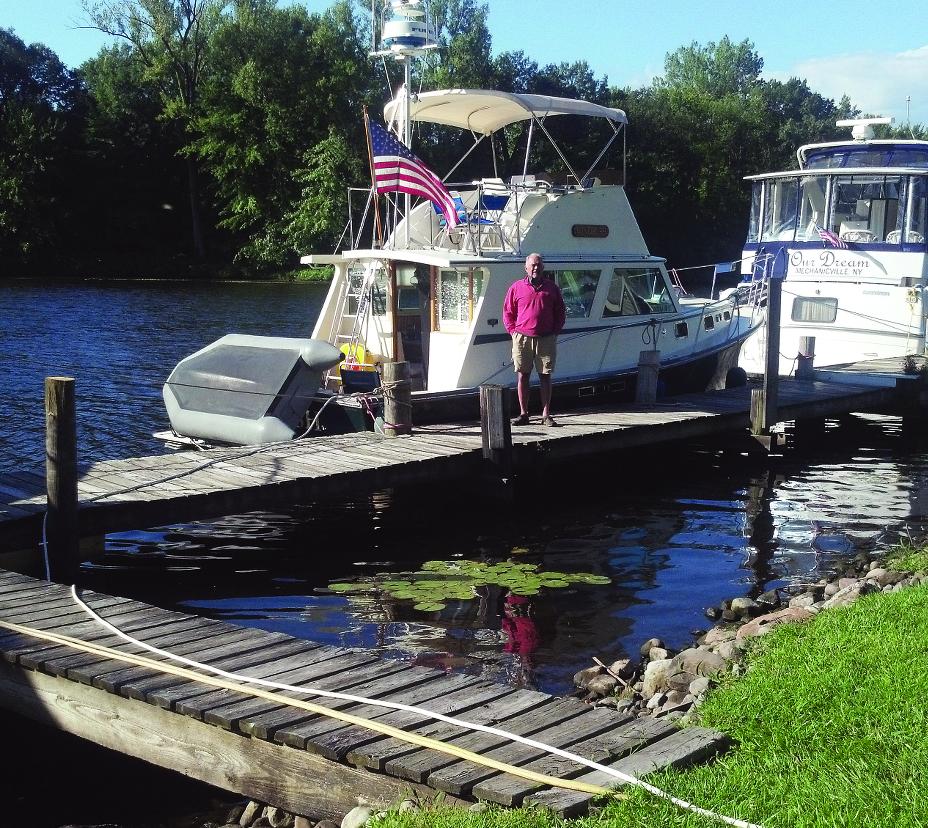 Windrush, a Wilbur 34, now lives in Lake Superior, where her owners use her both for day trips and long cruises. Here she is on launching day this spring. My family has a penchant for downeast boats, which we have found provide joy and perform well, even far from Maine where we live on Lake Superior.

For one of our first boats we went across the ocean to England, for a Dell Quay Fisherboat, a 19-foot open coastal fishing rig. We still have it, with its 6-hp Sabb diesel and a pair of sweeps from an old lifeboat. But it was plenty wet in the rain, or on sunny days when the wind was blowing. So we decided to seek some shelter with a Dyer 29. We bought it in Essex, Connecticut, while spending a few delightful days in town at the Griswold Inn.

After 15 years of cruising western Lake Superior on the Dyer, once again we were ready to move up. We wanted something just “a little” larger and more accommodating for longer trips and stay-aboards, with a proper head, galley, and maybe even a table for eating meals. Well aware of the danger of getting  something so big that we’d never use it, we set our sights on a boat in the 32' to 36' range. It should be downeast, pretty, traditional, slow, and comfortable. After many delightful days ranging the Maine coast, looking and looking (a major part of the fun), we found Windrush, a Wilbur 34 that had been built in Maine but was docked at the time in Oxford, Maryland.

We had been able to truck the Dyer 29 to Lake Superior. However, Windrush was too big to fit under bridges, so we had the pleasure of driving her back on her own bottom. We went up the Chesapeake, down the Delaware, up the Atlantic coast to New York City, then up the Hudson River and along the Erie Canal (the Great Loop so far). Then we veered right to Lake Ontario, went through the Trent-Severn Canal and over the Big Chute, splashed into Georgian Bay, and finally cruised up the St. Mary’s River into Lake Superior and across the lake to Madeline Island, Wisconsin, our homeport. The trip was 1,500 horizontal miles and 601 vertical feet through 76 locks; during that long shakedown cruise we went through a dozen fuel filters (bad supplies maybe?), but did not need to add a drop of oil to the Yanmar.

We keep Windrush at the Madeline Island Yacht Club near our cottage and use her as a day boat, almost as a runabout (remember she’s not too big), and for more serious cruising. We can tie her up at our dock during the day if it’s not blowing and get some serious boat-putzing done. 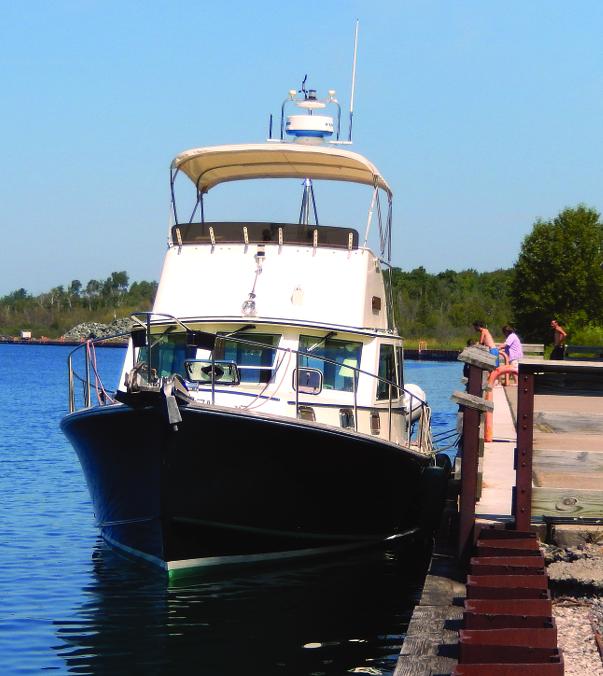 Madeline Island is in the Apostle Islands National Lakeshore, a beautiful and historic cruising area, so we spend many days gunkholing around the islands or commuting back and forth to the mainland town of Bayfield, Wisconsin, picking up guests or other critical cargo. We can cross the lake to the north shore, a 50-mile run, or, if the weather is good turn east to the Keweenaw Peninsula in northern Michigan, a 100-mile offshore run. Isle Royal, another National Park, lies 50 miles north of the Keweenaw. We have gone there, in pea-soup fog, navigating very carefully. Farther afield are Thunder Bay, Canada, and the north shore of the lake. Next summer maybe.

The Windrush suits us well—I would not want her to be even an inch bigger (more maintenance and all). She sleeps four in a pinch and two in civilized comfort, and her flybridge creates a patio for those special evenings and serves as an important conning tower. She’s stout and sea-kindly and we would take her anywhere at anytime... almost. In the meantime, when we want to downsize, there is always the Fisherboat waiting in the shed.

George Haecker is an architect who lives in Omaha, Nebraska and on Madeline Island, Wisconsin. When not boating, you will never find him on a golf course, but he may be in his studio designing homes or writing poems.