Rum-making on the rebound in Maine

Nearly 30 years afterward, a high school history lesson about rum’s powerful role in America’s past still resonates with me. The teacher had been animatedly lecturing about how the American Revolution came about. His heavy northern European accent grew thicker—think Henry Kissinger but with a Dutch twist. He exploded with excitement as he explained Salutary Neglect, a mostly uninterrupted 150-year period of parental apathy in which the mother country allowed the colonies to run their own trade system while England struggled with more pressing issues at home. 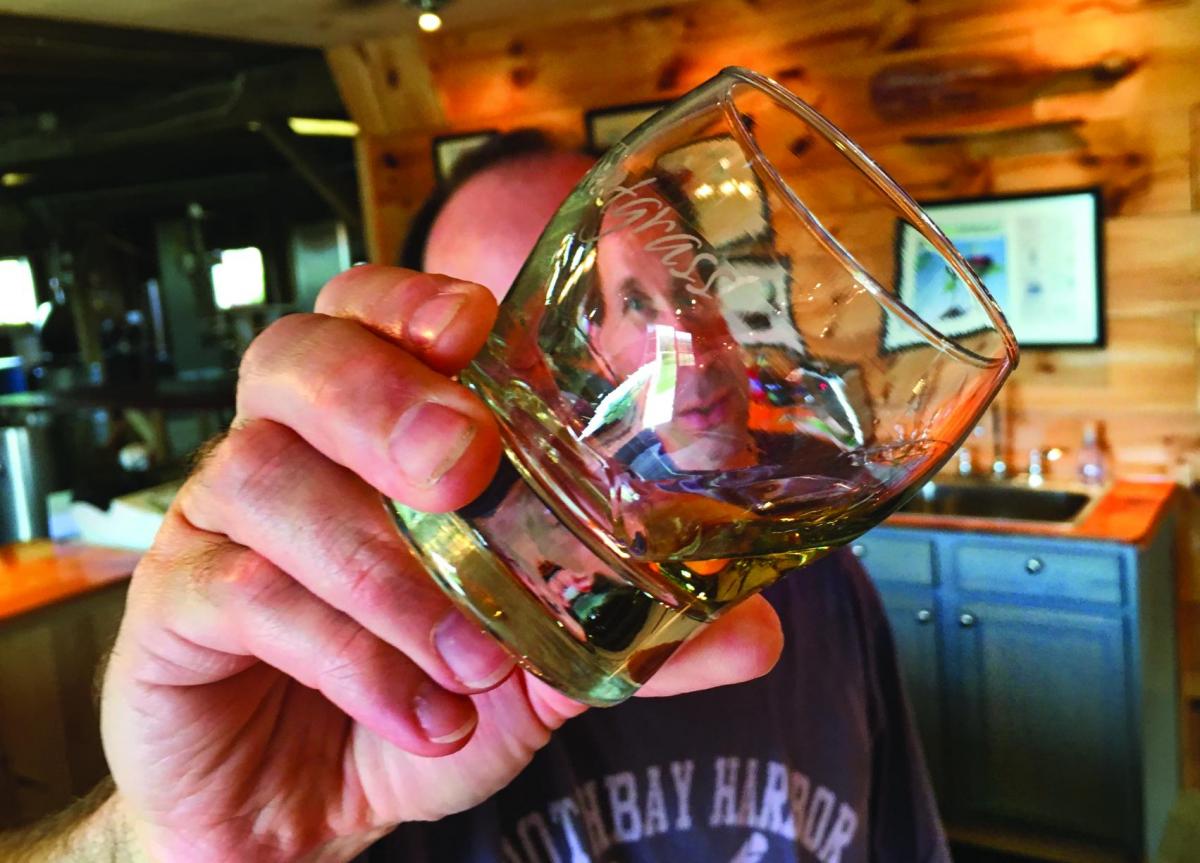 At Sweetgrass Winery and Distillery, Keith Bodine holds a masters degree in wine making from the University of California at Davis, which is also where he learned to distill hard alcohol. Here he holds up a glass of his Three Crow Rum. The process of making rum involves putting fermented molasses into a still and heating it until it boils. The vapors go up the tubing and into a condenser where the steam is cooled down and comes out as liquid alcohol. A 75-gallon bath of fermented molasses makes between 15 and 20 gallons of rum. The distilling process takes eight or nine hours. The rum is then put into used bourbon barrels and aged at least three years.

During this period, we were in many ways a colony run on rum making, rum-running, and rum drinking. We sold timber and other natural resources to traders in the Caribbean who then sent back unsulfured molasses and sugar. New England-area colonists, including distillers in the territory that would one day become Maine, turned that molasses into rum, which was sold at home and even to English merchants. For years the rum, timber, molasses, and other goods went untaxed. The unrest, and eventual Revolution, began when England tried to change all that.

The Revolution ended hundreds of years ago, but rum making is alive and well. In recent years, hundreds of micro distilleries have popped up across the country, competing for space on our liquor shelves and in our bellies. Maine was slow to join the revolution for mostly legal reasons. Until new legislation that was passed this year made things easier, Maine distilleries had to ship their product to a warehouse run by the state liquor licensing agency, then transport it back and pay a tax in order to sell it in their own tasting rooms/distilleries. Would-be distillers must build their distilleries to federal specifications and then file for a permit, which can take up to 18 months, to make and distribute their product—all without ever even distilling a drop of alcohol, since it is a federal crime to distill alcohol for anything but  medicinal use without a permit.

Despite this wall of regulation, more than half a dozen small-batch distilleries are now brewing, distilling, and selling their wares throughout the state—and a number of them are making some darn good rum. 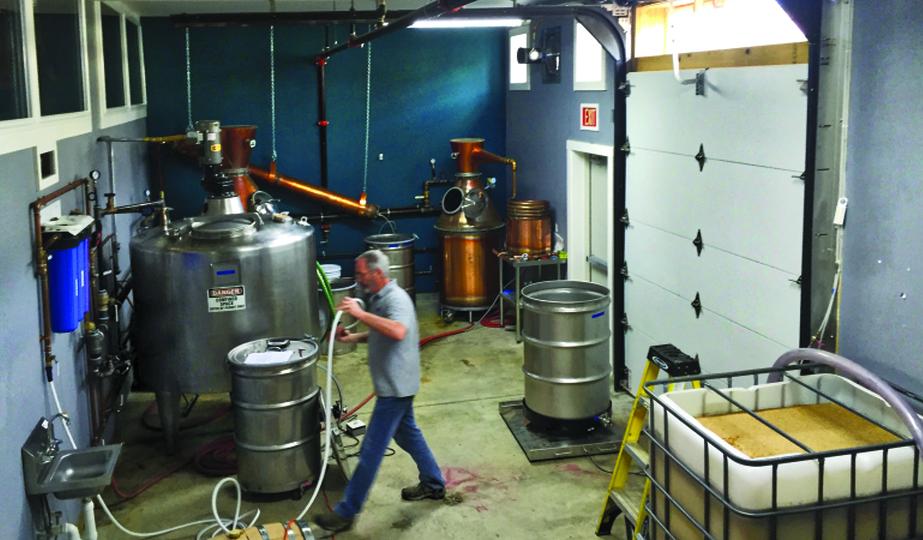 Dave Woods, 59, owner and operator of Wiggly Bridge Distillery in York, Maine, wasn’t deterred by the rules. Prodded by his son, he began distilling spirits on Montserrat in the Caribbean where he owns a home. That went well, but Woods wanted to do something to keep himself busy in Maine. He spent two years studying distillation, mostly online, and then filed for his federal permit in 2011. By 2012, his operation was up and running and he was selling vodka and bourbon out of his downtown York distillery.

He started making rum soon after, importing a high-grade blackstrap Caribbean molasses. “We were looking for—and were able to make—a thick, buttery, high-ester rum,” he said. “When I eat a steak, I want a lot of fat on it. I don’t want to eat that fat, but I want it for the flavor. It’s the same with rum. We are making spirits that are designed to be enjoyed. So much of life is no longer savored, and our product is about doing just that.” 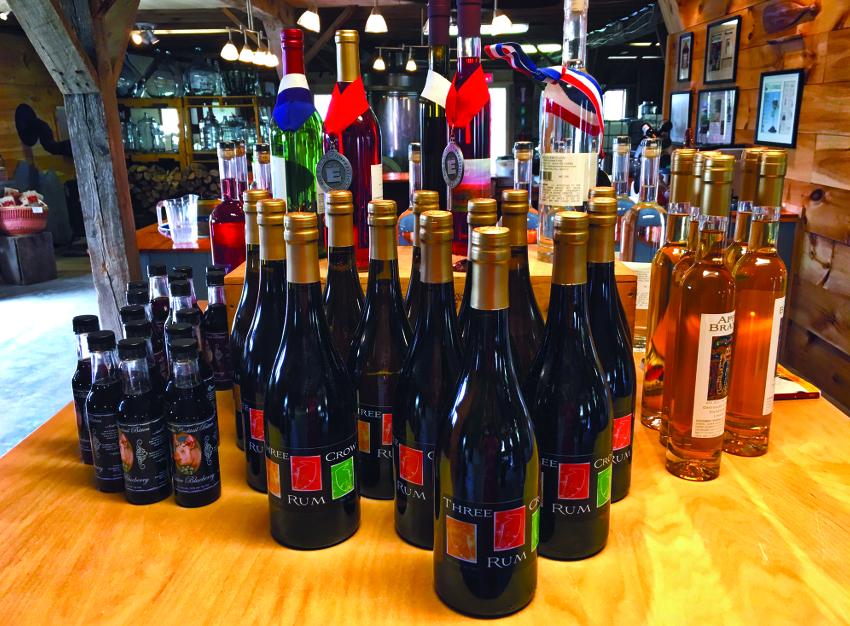 His rum has a strong butterscotch early taste and, according to Woods, “the last sip tastes like the first.”

Others in Maine who have decided to brave the difficult permitting process include New England Distilling in Portland, which makes Eight Bells Rum; Maine Craft Distilling in Portland, which offers Ration Rum, among others; Sweetgrass Winery in Union, which makes Three Crow Rum; and Bartlett Wines and Spirits, which produces Rusticator Rum in Gouldsboro. 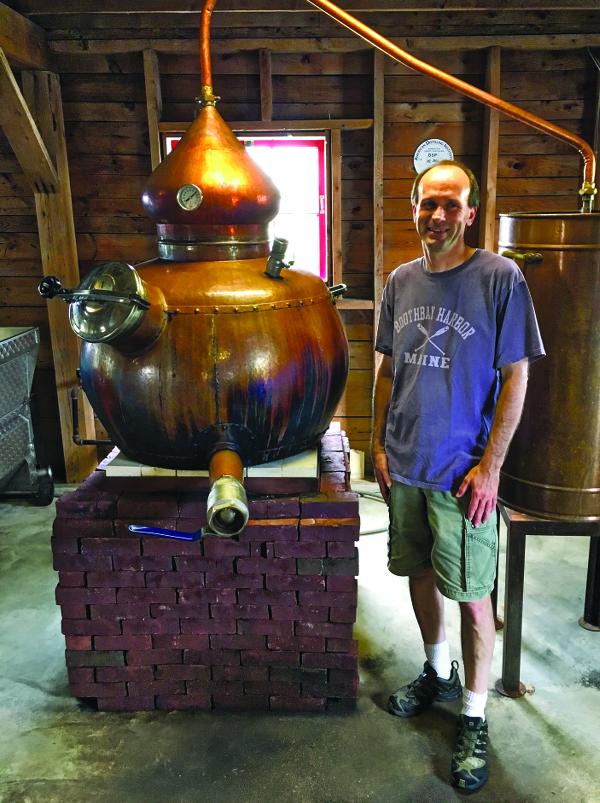 Bodine stands next to his alembic pot still. Steam from the boiling molasses goes through the overhead line and cools down in the container at right. Sweetgrass Winery’s co-owner Keith Bodine said Maine’s historical connection and affinity for rum led him to producing it. “That history carries through to today, and people in Maine think of themselves as rum drinkers,” he said. “Our customers, friends and neighbors kept asking if we were ever going to make it so we eventually did in 2008.” Sweetgrass’s Three Crow Rum was the first modern rum made in Maine, in fact. Three Crow is aged for about three years in used bourbon barrels and Bodine said it sells well.

Others started making rum for more whimsical reasons. Rusticator Rum’s creator, Bob Bartlett, who runs a 34-year-old winery with his wife, simply got some good molasses and decided to give it a try. He liked the outcome and so have plenty of others. Rusticator has been well-received both in Maine and elsewhere, nabbing a rating of 88 at the Ultimate Spirits Challenge a few years back, which is a strong recommendation. It has a number of initial flavors like vanilla and brown sugar and, according to the judges at the challenge, has “a long sweet finish.” 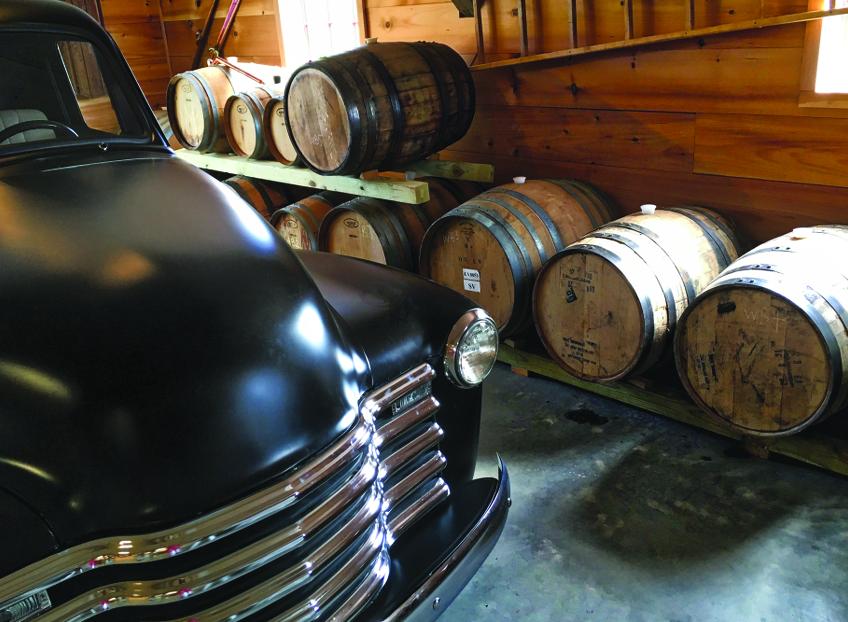 Aging in the barrels adds color and flavor. The finished product is then bottled. Sweetgrass is best known for its Back River Gin, whose ingredients include Maine blueberries. Of course, if former Portland Mayor Neal Dow, who helped outlaw the sale and consumption of spirits in Maine in 1851, were still in office, rum’s comeback would be short-lived. During his tenure, Dow, who went on to help make Maine the country’s first “dry” state, confiscated all the rum in his seaport town. As rumors spread that he was selling the confiscated goods on the side, angry Portlanders gathered outside the warehouse where the rum was being held on the afternoon of June 2. When the rum-starved protesters wouldn’t disperse and grew unruly, Dow called in the militia and ordered them to fire on the crowd. One man was killed and seven wounded, and the episode became known as the Portland Rum Riots.

W. Hodding Carter has written for several national magazines, including Esquire, Smithsonian, Newsweek, and Outside. The author of the books Westward Whoa, A Viking Voyage, and  An Illustrated Viking Voyage, he lives with his family in Rockport, Maine.