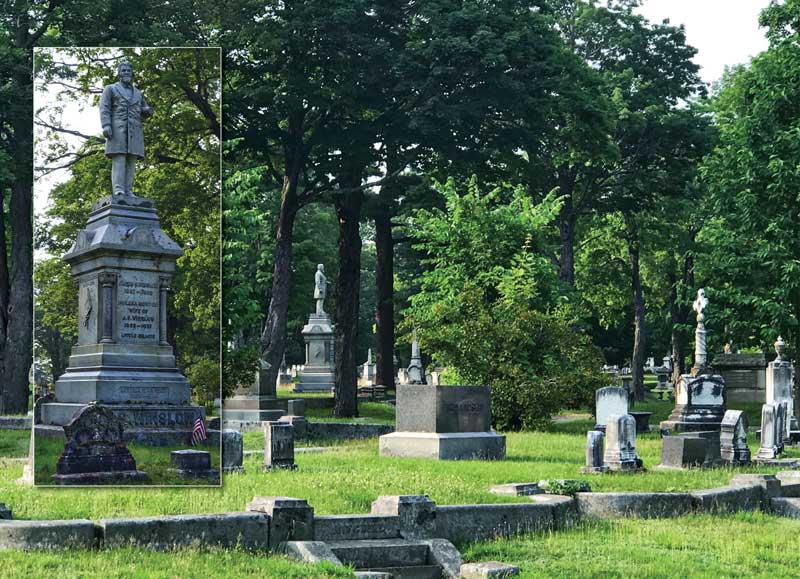 Capt. Jacob S. Winslow commissioned this larger-than-life granite portrait of himself with his spyglass tucked under his arm to mark his wife, Philena’s grave, and then later his own, in the Evergreen Cemetery in Portland. It is one of a handful of such carved monuments around the state celebrating 19th century mariners.

During Maine’s great age of sail in the 19th century, several prominent sea captains, shipbuilders, and shipowners were immortalized in stone sculptures at their gravesites. Today these impressive marble and granite monuments are poignant reminders of successful careers that once helped to shape the state’s maritime economy. 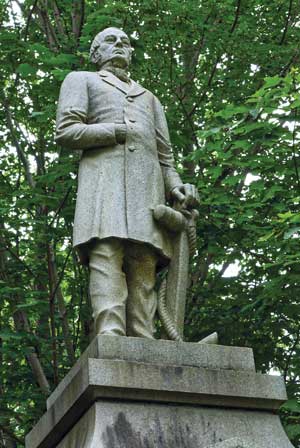 The elaborate carved statue of Edward O’Brien in Thomaston’s Elm Grove Cemetery includes an anchor, a symbol both of the source of his wealth and of hope. The first of these monuments was built in 1858 in the Badger Cemetery at Kittery Foreside to mark the grave of Samuel Badger, a noted shipbuilder who launched 45 vessels between 1830 and his death in 1857. Badger’s monument consists of a rectangular granite base upon which rests a two-part granite shaft. The lower section displays a relief of a vessel under construction, while the upper section features a niche containing a marble bust of Samuel Badger, the work of David M. French, a sculptor from New Market, New Hampshire.

After the Civil War, many Maine towns and cities erected monuments in public squares and cemeteries to honor those men who had served in the conflict. A popular motif for such monuments was the standing soldier, first employed in marble in Rockland in 1865, in bronze in Lewiston in 1868, and in granite in Boothbay in 1877. Soon the idea of a standing figure was used for private monuments as well.

In 1877, Captain Jacob S. Winslow of Portland lost his wife, Philena Morton Winslow. To mark her grave in Portland’s Evergreen Cemetery, the captain commissioned an elaborate Hallowell granite monument topped by a larger- than-life statue of himself holding a spyglass in his left hand. Winslow’s statue was first modeled in clay by the Portland carver Edward S. Griffin, and then carved in stone by local monument maker John Bell. Upon its completion in July of 1878, the Winslow Monument was pronounced by a local newspaper as “the finest monument in the state.” 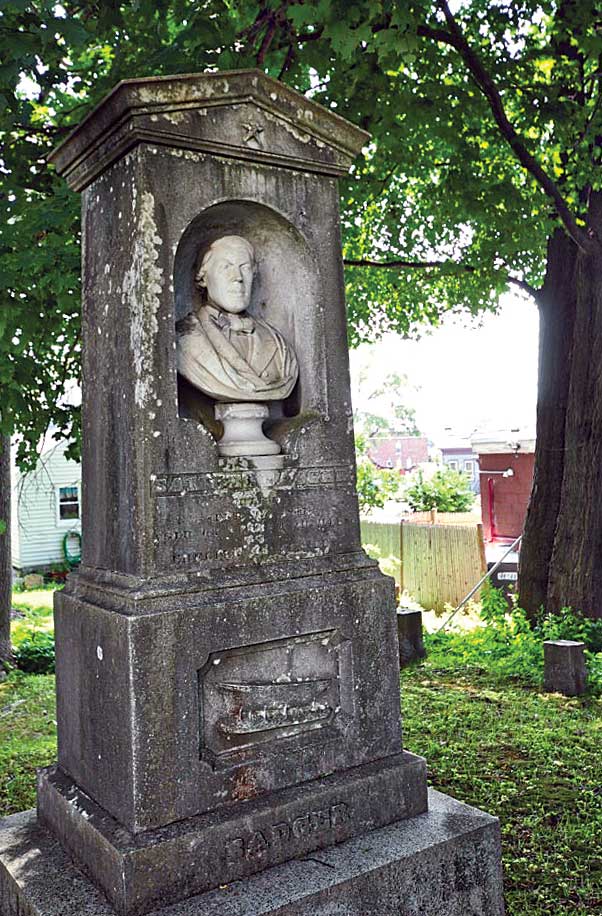 Shipbuilder Samuel Badger’s stone includes a bust carved by a New Hampshire sculptor, and a relief of a ship being built. If creating such a grand tribute to oneself while still living seems a bit conceited, Captain Winslow can be forgiven in view of his accomplishments. Going to sea as a common sailor at 14, he rose rapidly to become the master of a brig at the age of 20. After more than two decades as a sea captain, he established himself as a ship chandler, ship broker, and ship owner in Portland. From 1862 until his death in 1902, he was involved in the construction, ownership, and management of the largest fleet of sailing ships on the Atlantic coast.

Captain Winslow’s successes are mirrored in the life of Edward O’Brien of Thomaston. At the time of his death in 1882, O’Brien had built or owned approximately 90 vessels, making him the nation’s largest shipowner of his time. The fourteenth American to become a millionaire, he was widely known in Maine as a shipbuilder, banker, merchant, manufacturer, and politician. To recognize his achievements, his family commissioned a full-height statue of him for his grave in Thomaston’s Elm Grove Cemetery. The O’Brien monument was carved by Pietro Giordani from granite supplied by M.T. Jameson’s quarry in South Thomaston and was unveiled on Memorial Day in 1883. Edward O’Brien holds an anchor in his hand, a symbol of both hope and the sea.

The Badger, Winslow, and O’Brien monuments are in coastal communities. Statues of Captain Frederick Meady of Farmingdale and Thomas J. Southard of Richmond remind us of the close ties that Kennebec River towns had to seafaring and shipbuilding. 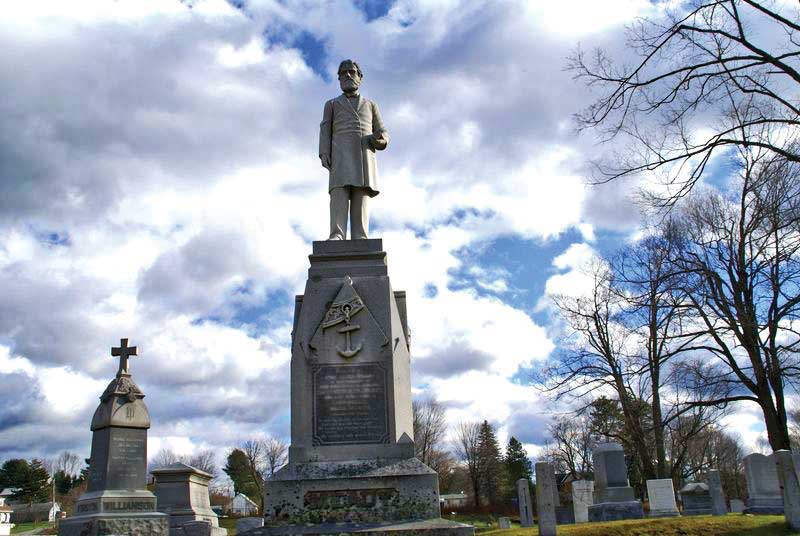 The 7-foot statue of Capt. Frederick Meady towers above a 10-foot base, both carved by the Hallowell Granite Co. using stone from its quarries, a monument to celebrate a monumental life at sea.

Born in Hallowell in 1823, Captain Meady spent much of his life aboard ship. An 1875 newspaper article reported that he had returned to Farmingdale after a nine-year absence at sea. In 1878 he retired because of ill health and died at his Farmingdale home in March of 1879. That summer, his widow, Eliza Meady, placed “a very rich piece of monumental work” over his grave in the Maple Grove Cemetery in Randolph, according to a period account. A seven-foot statue of the captain with a spyglass in his left hand stands atop a ten-foot Gothic base, all carved by the Hallowell Granite Company from stone provided by its quarries. A carved anchor appears on the base, accompanied by a verse that reads:

At last the storms of life are o’er,

And I survived the final gale;

My barque has reached the heavenly shore,

My anchor safe within the veil.

From 1884 to 1936, a life-sized statue of shipbuilder Thomas J. Southard graced a niche on the façade of the Opera House and Odd Fellow’s Block on Main Street in Richmond. Unlike the previous sculptures mentioned in this article, the Southard statue was created to honor the community’s most prominent citizen during his lifetime. While noted for launching 70 vessels, Thomas Southard also invested in such local enterprises as a dry goods store, a bank, a saw mill, a grist mill, and a cotton mill. The Southard statue was modeled in plaster by E. Agostinis at the Hallowell Granite Company, where it was carved in granite. The full-sized plaster model is now in the collection of the Maine Maritime Museum in Bath, while the stone figure, saved after the 1936 Opera House fire, is on display at the Southard Museum in Richmond.

Most of Maine’s 19th century mariners rest in modest, unnoticed graves throughout the state. However, Samuel Badger, Jacob Winslow, Edward O’Brien, Frederick Meady, and Thomas Southard received a recognition for their deeds that still captures our attention through the carvers’ art that celebrates their lives.